Series editor’s note: What does it mean for a body to remember its feeding, to have to reckon with its darkest days, days spent eating weeds in the aftermath of a genocide? And what does it mean for the body to choose to harm itself, by eating anything to make it whole, to forget what it once saw, what it once experienced without its permission? These are the questions that Hope Wabuke tackles with her poem “Ode to Kale,” tracing masterfully the intergenerational trauma in her family, creating worlds upon worlds that collide and expand, creating more room for the speaker to tend to her son. Wabuke’s acquired lexicon is as complex as it is both new and ancient, and she uses kale as a way to navigate this knowing our bodies are filled with, the knowing of things rotting inside, the knowing of violence erupting all around us, the knowing that the world is constantly at war with our bodies, one way or another. But there is tenderness here too, as the speaker tends to their own and, by extension, tends to us—for a mother who suffocates the piercing sound of gunshots by making a kale smoothie is one that knows well how to shield her son, how to shield us from the world that kills and feeds us weeds afterward. – Mahtem Shiferraw

when my son is young I make him
kale popsicles: one pound of kale

spread the heart attack scarring
spread she is all the american sicknesses fed; fermented

feel better but she will not eat it here, kale is a delicacy I tell her
a hipster organic treat at whole foods higher priced

I eat fast on the run do not exercise &
I lose my balance dizzy spinning light-headed only understanding one thing:

how we do not do math how we are silent

this is how you deny your mother is dying &
to everything: what is the point—

life my sister always asking mom, please
her voice enough like mine to make me think 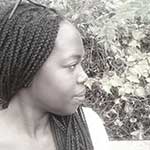 Hope Wabuke is a poet, writer, and assistant professor of English at the University of Nebraska–Lincoln.