Series editor’s note: In Saddiq Dzukogi’s new poem, the speaker observes as a snake shows up unannounced, unsummoned, and sluggishly inserts its head into a nest, and “as the yard grows quiet, / feasts on newly laid eggs.” It is a powerful image the speaker bestows on us, a quiet taking of the innocent, something so powerful, so silent, that sneaks in the middle of the day, masquerading its own arrival, its own devouring, with the beauty the earth has to offer. And perhaps that’s exactly what it feels like, to witness such odious taking, and our same inability to process, to act, is mirrored by the speaker himself, who does nothing to stop such feasting, but instead offers us something new: the growing of a blanket, the nurturing we have been missing for so long, offered to us without a question, without hesitation. And this poem is powerful because it is a sort of prayer for the silenced too; with it, the poet reaches deep into our throats as if searching for new prayers, to extract them softly into a world that still continues to conduct its taking without our permissions. – Mahtem Shiferraw

After Assar, I sit on the tail end
of our house where birds nest
on a lemon tree. A snake

bunches half its body on a height,
while the rest creeps along a branch,
niggling its head sluggishly

into a nest, and as the yard grows quiet,
feasts on newly laid eggs. In my hands
a thread goes into another thread,

until a blanket grows out of my crochet
and rests on my lap. Night, like my blanket,
covers what light remains

of the day. I reach deep
into my throat and say a prayer;

of the many things that can kill me
death is not one of them. However,
the earth is the snake that will

consume me like an egg.
I’ll live longer than the silence a corpse
leaves behind.

Nothing of the eggs remains.
But, as for me, my stories will linger

like a neckbone
that can withstand a hangman’s noose.
Tomorrow, when mother bird returns,

I’ll repeat my wife’s mantra;
a scar is not a flaw, just a story
that sticks to our skin. 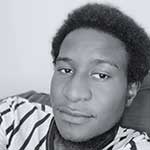 Saddiq Dzukogi (@SaddiqDzukogi) is the author of Your Crib, My Qibla, forthcoming from the University of Nebraska Press in 2021. His poems have appeared or are forthcoming in Oxford Review of Books, Kenyon Review, Oxford Poetry, Salamander, Southeast Review, and Obsidian, among others. His chapbook Inside the Flower Room was selected by Kwame Dawes and Chris Abani for the APBF New-Generation African Poets Series. He was a finalist for the 2017 Brunel International African Poetry Prize. Saddiq is currently a PhD student in English at the University of Nebraska–Lincoln.