Series editor’s note: With the opening poems of the 2021 series, Ariana Benson resurrects vivid, fleshy worlds, in which Black boys are immersed in fawnhood, leaving their coffin-shaped prints upon the earth, a sort of prelude to the wounding that will be inflicted upon them. Yet the boys are also surrounded by a forest, trees who statue themselves like deer, both as an act of resistance and as an act of witness. And perhaps that’s how Benson’s work is able to unearth the complicity of itself, the complicity of its readers; in “Black Pastoral,” it asks, who among you would interrupt this pastoral, and in “Etymology of Mercy,” it comes back again, insisting on the wounds and the wounding, both a prelude and an afterlude to the Black Voices series. – Mahtem Shiferraw

There is a kind of poetry in a turning that leaves a body redder than
before. Golden drupes ripen, orchards flush rouge. Sweetness

showers of bloody white flags. Yes, even the trees play possum
when a cold force looms larger than they. They freeze, mine stone

from wood, statue themselves like deer. Enter the fledgling buck.
See him, just barely: a tawny smudge blinking back at you

through the landscape’s static. See his molting crown—shredded
antler a tree in its own visceral autumn, the other a felled trunk

at rest in the ashen grass. Enter the Black boy.
See his boots leave little coffin-shaped prints in the ground. See what lingers

in the foam of his wake. See them together, this boy, this deer,
both a lone solstice removed from fawnhood, from their spring

-pink and summer-blushed selves, the memories of whom live
only in the deep black of the other’s eye. Now,

see them reminisce a moment in unblinking silence.
Then, see the boy’s tiny hands, pocked with oak

-knot knuckles, his womb-smooth palms split
along umber fault lines, as they meet to cradle the lost

horn and turn it upright in the frost, making sapling of skeleton. See
them leave, then return when the white recedes. Their tree now

blooming prelude to the red of moss and possibility. For some,
winter is a season. For others, it is more state of being, beginning

when they leave the red of their mothers, growing bitterer
with every pale return. They learn the threat of hound-snouted men

who, upon cornering creatures rendered dark with breath, ponder
the taste of flesh peppered generously with compact lead.

A rusted tree, a feigning rodent’s drooping tongue, a deer’s shed
velvet, a Black boy’s garnet-gummed grin—none of these are wet

with death’s jaded red. But I’ve learned men will always find something
else to call that which already bears a hue, a name. I pray

this poem’s veins will not run clear before its body leaves
my hands. That it may turn slowly in your palms, yet lithe and soft

to the touch. That you will tend it gently as a bow-winged bird
whose last innocence is its unlearned fear of its own red

-feathered descent. Tell me what you see: a bird, a deer, a forest, a boy?
Who among you would interrupt this pastoral? Who would muddy

these budding strokes with pigment too dense for the canvas?
Who will introduce them to a red they have felt only in warmth,

a shade they were never meant to see? A red that pulses pure
blue where it belongs: hidden—a humming secret within their roots.

sometimes, it means “forgiveness,” as in, “I forgive your fall
by tying stones to your feet mid-descent.” a clement blade

also brandished against enemies, as in, “allow my mercy
to free you from this life wasted taking futile stabs at mine.”

this misericorde nightly shuts my eyes with the lulling
anesthesia of sleep. so surgical, this mercy designed

to find the gaps in a corset of ivory parentheses,
to breach the aortic dam. tenderly, I wrap your palm

around the gilded hilt, smother it with my own. fingers,
like tongues, plunge—a French mercy kiss. Lord have mercy

says my grandma when we hear the rigored hiss of a still
-warm body forgiven into frigid ground, sizzling

and fissured like molten gold drowned
in a pool of water. I repeat this prayer, the same God

answers, but He mouths mercy with a maroon tongue,
speaks the creole of the fist to carve forgiveness

into impinging skin, to take mercy into their own sugarbit
hands—to scorch earth and name the ashes revolution.

for the bladesmiths who mass-smelt weapons
from scrap-metalled men: mercy. I insist

you taste the amnestied brass you forge. to
the deadeyes who snipe anything black

enough to be called shadows’ kin, I give the meticulous
mercy the gin gave clouds of cotton in offering a clean

break. mercy, mercy me. merci: French for “thank
you.” to the architects of our darkness, in the absence

of a misericorde, I present my silken fists
in gratitude. may my gentle hands, damp with starshine,

grace the supple clay of your neck into a spindle
-thin flute. oh, how you’ll sing of my bone-whet caress,

how kindly I wring rings of mercy into your
throat. to you who whittle the cross into a crude shiv,

you who sate your crops with flesh
-drawn rain—I christen you forgiven. baptize you breathless

over, and over, and again. for you who won’t rest
until you’ve made a meal of my world, I wish nothing but miseri

-corde. merci, I thank you. for all the times you heaped upon
us a generous mercy we had done nothing to deserve. 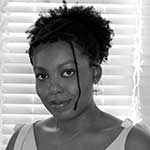 Ariana Benson (@literari_ana) is from Chesapeake, Virginia. She received the 2021 Graybeal-Gowen Prize and was a finalist for the 2021 Pink Poetry Prize. Her poems appear or are forthcoming in Obsidian, West Branch, Shenandoah, Great River Review, and Auburn Avenue, where she serves as nonfiction editor, and elsewhere. Through her writing, she strives to fashion vignettes of Blackness that speak to its infinite depth and richness.