Series editor’s note: In Jamaica Baldwin’s “Windfall,” the self is buried beneath layers and layers of internalized memories, becoming an ocean of worlds. But instead of resting there, the self is forced to make many crossings, reminded of its past, of the cruel ways in which it is continually defined and contained within language, standing in a lighthouse, both warning and light. But Baldwin’s beauty is not seeped in despair; instead, the poet extracts the self, to question the language used to describe us, Black folk: how can we be a thing to fear when we are filled with light, when we are light itself? How does one reconcile this about oneself, the perceived identity the world imposes on us, instead of the one we know deep in our hearts? And how does one find home amidst all this chaos, how does one reach a clearing without being lost, which compass points to a light free of the language of dread and fear? Here is where you’ll find a map of sorts, layered beneath worlds of oceans, where the poet seems to say, we are perfect beyond what the light reveals; hear us, this is real, we are real, can’t you see already. – Mahtem Shiferraw

Sometimes, I am reminded that so many of the references I carry
in my body are occupied by white women and   I am lost

in an ocean of memories, worlds beneath worlds
of ocean that should be kept hidden, as all sacred things
we want to keep from being policed must be kept hidden. Like

language. Once, I learned Morse code. Spent a weekend
at Pidgeon Point Lighthouse with a ham radio, tapping greetings
to kids in Russia then waiting for their response in return.

When I think about lighthouses, I think of us eager to reach across
borders, or that Sinéad O’Connor song about the woman forever

waiting for her man to return from sea, but when I think of men
who disappear, never to return, there’s always the image of my father

who made a practice of it until leaving was the one thing he perfected.
In death he’s become a soft-spoken man, not silent, but quiet.
Not a whisper, but a windfall. When he speaks, I’m only a kid reaching.

I’m a woman alone in a lighthouse with underwater memories, always
waiting. Some nights, I search my body with a flashlight for signs of a future.

Light, we’ve been taught, is how we find each other in the dark,
the omnidirectional lens guiding boats away from dangerous edges,

the North Star, the moonlight: a point of reference to cling to
in the dark emptiness of night.   Dark.   Empty.

The language they ascribe to our bodies is made of the same shadow, and
warning. It’s no wonder they fear us, no wonder my father at sixty-three
was a miracle, no wonder night, like his body, has been riddled

with the language of dread. But light isn’t the surest way home.
We’ve grown accustomed to the ease of it, as if ease was the point
of living, grown idle in our new skins, forgetting our nocturnal ways.

Every now and then in a dream, I remember what it felt like   to see
in the dark beyond what the light reveals, to see how perfect we all are

in the absence of its confidant gaze. I’ve never seen a night unpolluted
by light, never loved a body that wasn’t held up to light’s scrutiny,

but I’m learning. Last night I ate in the dark. Closed the blackout
curtains and touched my body in new ways. Remembered to be grateful.
Remembered what Toni Morrison said about impenetrable whiteness,

that such allusions are only sinister and lazy. I remembered that   shadow
is only ominous because language made it so. I swear to you, listening
to Nina Simone in the assiduous dark will shatter you on a cellular level.

This is real. This is the ocean of what we’ve lost inscribed in night’s
unfolding, not an eek, but a bellow, a darkness so rapturous   it blinds. 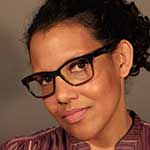 Jamaica Baldwin (@jamaicabaldwin) hails from Santa Cruz, California, by way of Seattle. Her work has appeared, or is forthcoming, in Prairie Schooner, the Adroit Journal, the Missouri Review, Guernica, and TriQuarterly, among others. She was the winner of the 2019 San Miguel de Allende Writers’ Conference Contest in Poetry and runner-up for the 2020 Tupelo Press Berkshire Prize. Her writing has been supported by Hedgebrook, Furious Flower, and the Jack Straw Writers program. Jamaica is currently pursuing her PhD in English at the University of Nebraska–Lincoln.