“All poems are Arabic to me”: A Review of 3arabi Song, by Zeina Hashem Beck 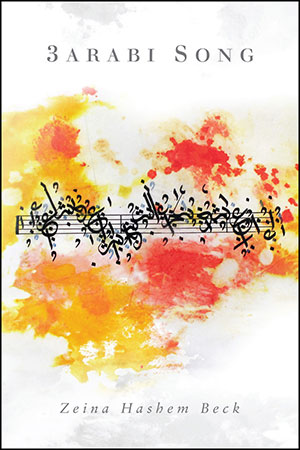 “When I read a necessary poem (which is different from just a good poem), it shakes me, even changes me a little, and deepens my understanding of the world,” Zeina Hashem Beck, Lebanese poet, said in an interview with Al Jazeera. Her chapbook 3arabi Song, which won the 2016 Rattle Chapbook Prize, is an homage to the Arab world, a refrain that threads together loss and compassion. Hashem Beck, who grew up in Tripoli, writes of her exposure to Arabic singers from a young age and of her parents who would sing every day. As she says in a video interview for Epicenter, she’s chosen to write 3arabi Song in English, yet her subject matter is steeped in her own Arab experience: her parents, street life, political turmoil, and music. An exaltation and exploration of culture, this chapbook is a compelling coexistence of language, violence, grief, and a search for personal and political peace.

Hashem Beck is not new on the poetry scene. Already nominated for a Pushcart Prize and the Forward Prize, the Dubai-based poet has published a first collection, To Live in Autumn, and her other chapbook, There Was and How Much There Was, is a smith doorstop laureate’s choice, selected by CarolAnn Duffy.

The poems in the chapbook 3arabi Song, praised by poet Marilyn Hacker, read as if they were songs in their past lives, begging to be rediscovered. Hashem Beck recalls the music she was exposed to as a child and how it had the power to bring people closer, to heal:

And when they did remember baladi, our country,
was tearing itself apart,
when they remembered the childhood lost,
wanted it back,
they listened to Remi Bandali.
As the little girl sang about salaam . . .

The poems are also songs of the self—of home, displacement, and compassion. “All poems are Arabic to me,” she writes in the title poem, which she performed with the Fayha Choir for the 2016 Emirates Airline Festival of Literature. Song seems to be a potent panacea:

The media’s never-ending coverage of violence can be numbing, often burying what really connects us. Hashem Beck’s poetry, however, highlights what we share as humans, despite the devastation of our wars, the desperation ofour love, and the conflict of our cultures. According to the poet, “. . . as I started writing and maturing, I realized that everything you write is political. When you go and write about the streets of Beirut, that’s political. When you write about how your mother uses English, how she messes up her English, that’s political.”

The media’s never-ending coverage of violence can be numbing, often burying what really connects us. Beck’s poetry reminds us of that necessary intimacy, while humble and informative, despite the devastation of our wars, the desperation of our love, the loss of our torn countries.

Hashem Beck also mentions an initial feeling of guilt for not writing in Arabic, yet in using English, some Arabic, and a touch of French, she has found her own mode of expression. The poems bring out the color of all three languages, immersing the reader in a striking multiplicity. For readers whodon’t speak or understand Arabic and French, the brightness of the language still resonates, as in the title poem, for example:

They all believed they had a Dalida within them—
blonde, fine, mélancolique, méditerranéenne,
and of course “malade, complètement malade,”
with always “ya baladi” at the tip of her tongue.

As she says about the ahdan, the Islamic call to prayer, Hashem Beck’s chapbook is both modern and ancient. The proof is in her references from Lebanon, Iraq, Egypt, and Syria: the Rubaiyat of Omar Khayyam, the poet Mahmoud Darwish, the contemporary singer Sabah, and the tradition of mawwal singing. Although the refrains of 3arabi Song stem from personal sorrow, the chapbook contains a much bigger one: the collective pain of grief and the will to live despite loss. For example, in the poem “Naming Things,” dedicated to refugees, she writes, “kiss me, for where else / do we carry our home now, habibi /if not on our lips?”

References are also provided as cultural insight for religious words used. Hashem Beck explains in her notes that hijra for example, means migration in Arabic. Although this would be used in the Islamic context to refer to the prophet Mohamad’s journey to Medina, Hashem Beck alsouses it to bring our attention to the Christians and Yazidis who, in fear of being killed by ISIS, fled Iraq in 2014.

If you’re a lover of form, you won’t be disappointed. Hashem Beck’s ghazals make use of the form’s pulsating, wavelike mantra (bahr, as Hashem Beck notes, is both “sea” and “meter” in Arabic). She crafts them with great care and originality while respecting the timeless sonority of the ghazal tradition. In a current world of fragmentation and fear, Hashem Beck emphasizes the importance of heritage, family, and home. The repetition of the ghazal is reaffirming and appeasing, making this form a well-suited choice for the subject matter. What’s more, in times of distress, 3arabi Song’s sincerity and unyielding openness of heart come to the fore:

“Fi Marlboro, fi Viceroy, fi Gitanes,” they said.
Every house had them cigarette trays. Some nights, the politics
settled with the ashes, and the jokes came, the clapping,
the Allah Allah rising with the smoke, the dancing. Time tortures
everyone. Let’s heal a little. 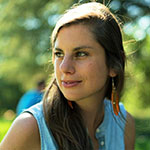 Stephanie Papa is a poet and translator living in Paris, France. She is the poetry co-editor of Paris Lit Up literary magazine and holds an MFA in poetry from the Pan-European program. Her work has been published in World Literature Today, Niche, NOON, great weather for media, Four Chambers Press, and more.