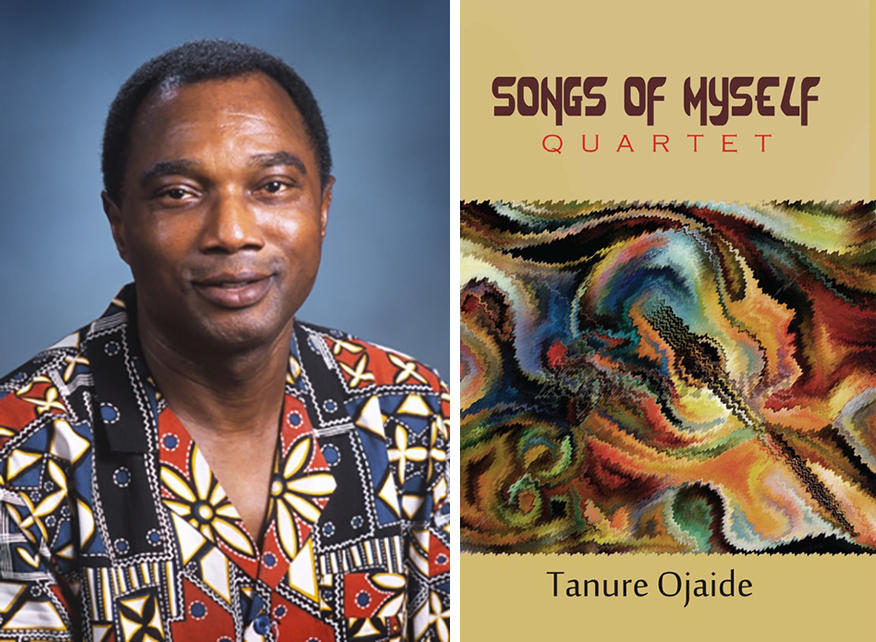 Tanure Ojaide seamlessly blends the personal with the political in this volume of verse to paint a compelling portrait of a Nigeria always in transition.

Nigerian poet Tanure Ojaide has won numerous awards for his creative works. He credits his maternal grandmother, who raised him, for inspiring his writings. “Whatever Inene told me in the morning,” Ojaide claims, “proved true by sunset.” After numerous publications, Ojaide decided to sing Songs of Myself: Quartet (Kraft Books, 2015), a compelling song that describes different scenarios of his life including his early days, love life, the political situation of his country, and his environmentally devastated ancestral home of the Niger Delta.

In “The Worm,” for example, Ojaide compares himself to this little creature known for its powerful artistic skills:

I would rather take to the task of the worm
and make the cotton tree my residence. . . .

Ojaide took to writing and has been consistent in exploring “the house of words” from his “kingdom of songs.” Just like the worm, who makes the cotton tree its residence and whose hard labor never goes unnoticed, Ojaide’s “bush labor” of writing has earned him scholarly recognition both at home and abroad.

Just like the worm, who makes the cotton tree its residence and whose hard labor never goes unnoticed, Ojaide’s “bush labor” of writing has earned him scholarly recognition both at home and abroad.

In part 2 of Songs of Myself, Ojaide satirizes the Nigerian government and those in power for their corrupt practices. For example, in “The new lotus eaters,” he ridicules the people’s representatives who are supposed to fight and speak out for the electorate who put them there; rather, “Once there they transform without effort into goats, pigs, / pythons, and other beasts scrambling in the oil-glutted soil.”

Ojaide compares those in power to animals to show disgust and disappointment toward those who are meant to serve the people. In the current world of environmental pollution and global warming, Ojaide emphasizes, in part 3 of the quartet, the devastated ecosphere and biosphere of his Niger Delta environment. In “Maybe they are right,” Ojaide is caught between either pointing accusing fingers at the government or critiquing his people on the lack of environmental sustainability, but suddenly affirms thus: “Maybe they are partly right on the share from the big table. / But how can they be right on the wasteland on which we live?”

Evidently, there is absolutely no way the people’s blame will override those that Ojaide refers to in “Can I still call from the River Nun?” as “money mongers, army of developers, and conglomerate of poachers.” Ojaide is visibly angered by the activities of the oil poachers on his Niger Delta homeland over the years.

Finally, Ojaide threads together compelling songs of love, hope, and resilience composed from his kingdom of songs and extracted from the beauty he has seen within his house of words. Songs of Myself reflects Ojaide as a mature poet whose persona reflects artistically on human existence through the prism of a Niger Delta minstrel.

Lami C. Adama received her PhD in English from Texas A&M University in 2016. A poet, Lami’s writing reflects her Igala kingdom background. She has written and published articles on Shakespeare, African postcolonial literature, and ecocriticism. She is currently an assistant professor of English at Texas College in Tyler.