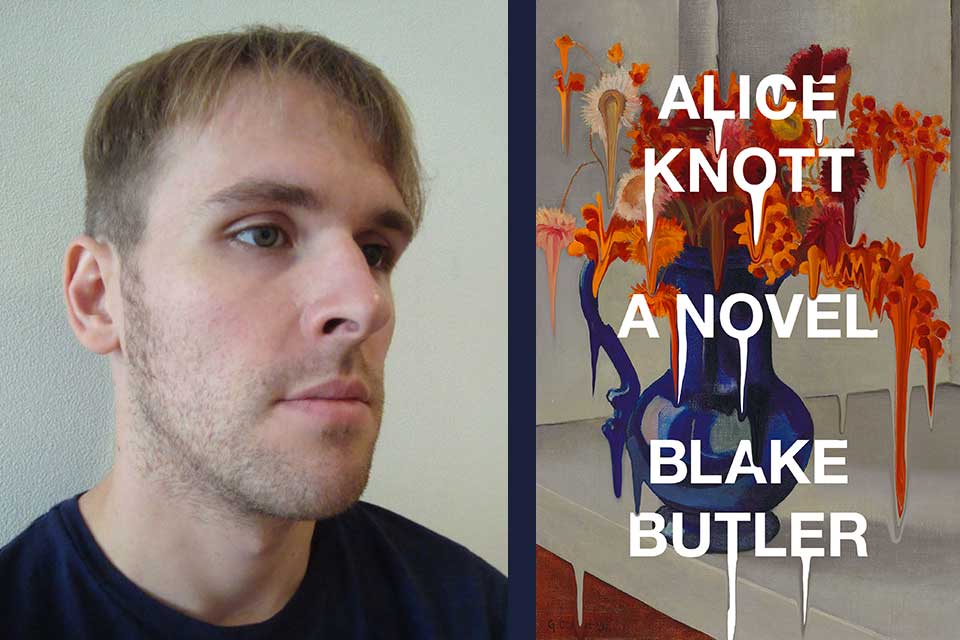 The tagline (or, in some cases, subtitle) of David Lynch’s 2006 film Inland Empire reads simply: “A woman in trouble.” Of course, if you’ve seen that movie, it’s about a lot more than that, but it works. I’d use something similar for Alice Knott (Riverhead Books), the new novel from dark wizard Blake Butler, although its resemblance to the Lynch film is in spirit only.

Alice is an heiress with a collection of eight extremely expensive paintings. They are hung in a vault in her home. One day they are stolen out from under her, and an art terrorist (for lack of a better term) lights one of them on fire. This leads to a string of copycat destructions, people bashing their faces into classic paintings, stabbing paintings, using paintings and sculptures as weapons. It spreads across the world.

Alice Knott feels a bit more focused, almost as if in the earlier books Butler is tinkering with a laser cannon, while in this one he’s turning it on you—and turning it up.

But even as I type that, it doesn’t feel like I’m actually giving you an idea of what the book is like. The novel doesn’t move from plot point to plot point but from feeling to feeling. People speak and their lips don’t move. There are faces behind faces. Bodies come apart, over and over again, reaching a kind of noisy crescendo before reconstituting themselves in some new white hallway, or room that’s shrinking. If you’ve read Butler’s earlier stuff, you kind of have an idea of what you’re in for (although in this one no one vomits a bird). Unlike his previous novels, however, this one feels a bit more focused, almost as if in the earlier books he’s tinkering with a laser cannon, while in this one he’s turning it on you—and turning it up.

I keep trying to come up with my favorite bits in the book, where it really is firing on all cylinders. I can’t decide if it’s the riff on Junji Ito’s “Enigma of Amigara Fault,” the precision of descriptions with regard to how a person might feel psychic or physical pain, the grainy-video feel of the atmosphere (there are some Beyond the Black Rainbow aesthetics going on), the way it feels like you might be losing your mind when you read it, the small bits of emotion and feeling that made me feel deeply sad, the hauntology of the whole thing, or maybe the end, where I said out loud “don’t do it” and then he did it. I loved it all.

There is a hypnotic nastiness to some of this book, but it’s a ritual, a trial, and when you get through it, you’ve gone somewhere.

In his essay for Hideous Gnosis, Steven Shakespeare writes (of black metal music): “What does the absolute sound like? If being is known only in becoming, is the music of the spheres known only as they shatter, and grate, and scourge space and time into new forms of chaos?” Reading Butler’s new novel, all I could think about was black metal, how it acts as a kind of sin eater, reveling in the dirt and blood until you feel sick and purified. There is a hypnotic nastiness to some of this book, but it’s a ritual, a trial, and when you get through it, you’ve gone somewhere. It’s a book that is about its doing as much as it is about what it is about. It is shattering the space of the page into a new form of chaos and, as such, is a constant becoming.

As Butler writes in Alice Knott: “Even the concept of the Idea itself now feels like a plague of its own making.” It’s rough, it’s fascinating, and it is a thing in motion. It’s a masterpiece.

J. David Osborne is the author of Black Gum. He runs the indie press Broken River Books out of Norman, Oklahoma.