Loretta Collins Klobah’s Ricantations (Peepal Tree, 2018) is her second collection of poetry. The book has been selected as a Poetry Book Society Recommendation in the UK and is a continuation of the richly textured language of her first volume, The Twelve-Foot Neon Woman. Structured around four parts, “Come, Shadow,” Revel, Rebel,” “Memoir of Repairs to the Colony,” and “Art Brut,” this 138-page book is a substantial and very satisfying collection.

Collins Klobah’s new work is speckled with imaginative storytelling, and many of the poems are fabulist in sensibility. In the opening piece, “Night Watch,” a “broke free” gargoyle has a “drop of moonlight in each ruby eye,” and later, young men become “gárgolas, flying / up our night streets, helmeted, red-eyed, on small motorbikes,” the mythic and the modern colliding to manifest new representations of Puerto Rican space. In Collins Klobah’s hands, a homunculus in a medical school lab (“Tissue Gallery”) becomes

a douen meant to range the barefoot forest,
those faceless stillborn and early-dead children
with backward feet,
who lure human playmates to the woods
and fill their always hungry mouths with little crabs.

Collins Klobah is careful to place the laboratory within the context of Caribbean women’s reality, for these babies preserved as specimens are the aborted or lost ones of

The women who came with gravid uterus
to Puerto Rico from the Virgin Islands,
seeking to save or end pregnancies

Collins Klobah’s insertion of the fantastic serves to underscore the otherworldliness of the lab but at the same time infuses the homunculus babies with potency and resilience.

At home, I whisper to the midnight page,
Women of the Virgin Islands, Sistren,
I saw them, and they are okay.
Your small ones are still on the Earth!

“Tissue Gallery” is exemplary of the compassion and social consciousness that informs this collection. Elsewhere, Collins Klobah reflects on incarcerated women, issues of sexual identity and racial representation, and Puerto Rico’s colonial and neocolonial history. In the playful, “The Green Lantern y Los Muertos Senta’os,”

. . . God, or the First Science Officer
of God, was looking for a soul to send
to be a true Guardian Angel of Puerto Rico,
seeing how both Spain and the U.S.
had so fucked the job up.

Ricantations documents Puerto Rico’s people and places, calling out corruption such as child murderer Nathan Leopold, later turned island ornithologist (“Chairman of the Committee of Nomenclature” and “Memoir of Repairs to the Colony”), but also mapping spaces of creativity and pleasure and zooming in on the wonders of the everyday. “Life is on the wire / everything else is just waiting,” says Nik Wallenda, a high-wire circus act in “The Flying Wallendas in Puerto Rico.” This book is redolent with stories, texture and imagery, with each piece serving to record as well as interrogate history and culture. Amid all this, it is the eponymous “Ricantations” that really anchors the collection, bringing attention to the contemporary moment of Hurricane Maria.

We bathed in bowls and hand-washed clothes
with tainted water, the dam at Comerío clogged
with animal carcasses, the raw sewage of Caguas
backwashing into our incoming water lines.

The poem ends with the question, “Can we do some things / differently now?” These words resonate—an appeal to government and community. And a reminder, too, of why the voices of our poets matter.

These and other concerns are woven throughout the collection as Collins Klobah ignites dialogue with art and artists—an exploration that began in her earlier collection, The Twelve-Foot Neon Woman. The final section of Ricantations, “Art Brut,” engages with the art and creativity of Baldassare Forestiere, Sabato Rodia, Roberto Sanchez Rivera, Samuel Lind, Wendy Nanan, and Eddie Ferraioli. Of these, “Osain,” a reflection on a sculpture of the Yoruba orisha of plants and medicine by Samuel Lind, is of particular note. In a 2012 interview Collins Klobah says, “I like writing ekphrastic poetry, especially when the poem makes the surface of a painting or mural permeable.” In “Osain,” Collins Klobah joins hands with Samuel Lind in a powerful invocation of the spirit of the orisha:

His heart and liver shrink,
So that he can run faster.
From matter to spirit
is to see something beyond the senses.
Like a tree that branches
one sacrifices everything
for the images that come
and are projected.
The clay man runs;
his arboreal fingertips
flame out into waxy leaf-sprouts.
Birds sing! He sings
in the voice of a bird.

Here, word and image merge, reaching back to Puerto Rico’s African heritage as a source of healing. Collins Klobah writes with a keen eye for visual detail. This does not surprise—a lesser-known side of Collins Klobah is her work as a painter, and in poem after poem one witnesses that artist’s eye with its careful attention to minutiae coming to bear. Together, these thirty-eight poems, chock full of texture and imagery, emerge as a gallery of sorts, archiving the many sides of Puerto Rico, past and present. “Mary Harlotry,” a piece that questions representations of race and identity in Eddie Ferraioli’s “Twenty Virgins” series, closes the collection with these words:

Ferraioli did not see the tamarindo girl
with tamarind skin playing tag between one trunk
and the other. He will not fashion her from
Medalla bottles, smooth sea-glass, caracoles, crab
shells, whelks, coco husks, red coral, and Irish moss.

Collins Klobah ends Ricantations with a reinscription of Puerto Rican identity, bringing all the acuity of her work as a Caribbeanist and cultural critic to the realm of poetry. This is an evocative and welcome book. 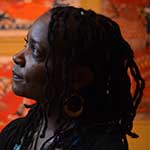 Marcia Douglas is the author of the novels The Marvellous Equations of the Dread, Madam Fate, and Notes from a Writer’s Book of Cures and Spells as well as a poetry collection, Electricity Comes to Cocoa Bottom. Her awards include an NEA Fellowship and a UK Poetry Book Society Recommendation. The Marvellous Equations of the Dread was longlisted for a 2016 Republic of Consciousness Prize and a 2017 OCM Bocas Prize for Caribbean Literature. She is an associate professor at the University of Colorado, Boulder.