When I lived in the Trastevere neighborhood of Rome, I made a point of stopping in San Francesco a Ripa whenever I was running errands. The church houses Bernini’s masterpiece L’Estasi della Beata Ludovica Albertoni. Light and shadows passing through the high hidden chapel windows change throughout the day, and they place the Blessed Ludovica in communication with the city outside as well as with the heavens. In the very same church is the locked chapel where painter Giorgio de Chirico (1888–1978) is buried. In 1992 his widow, Isa Far, moved his remains there from Verano cemetery and gave the Franciscans, to whom she was close, three de Chirico paintings. These are hung within a severe geometrical arrangement of rectangles and arches that give the visitor the sense of actually entering a metaphysical de Chirico painting.

I wonder if placing her husband in a church with one of the great works of the seventeenth century was a joke typical of the de Chirico sense of humor.

I wonder if placing her husband in a church with one of the great works of the seventeenth century was a joke typical of the de Chirico sense of humor. One of his famous pieces of art criticism was the 1921 provocation in Mario Broglio’s journal Valoria Plastici (Plastic Values). “La mania del seicento” was a take-down of what de Chirico saw as the contemporary “baroque obsession.” Or maybe, instead, Isa was playing a different kind of joke, referencing the later paintings and sculptures with which her husband walked back his early dismissal of the “easily understood” and “bourgeois banality” of the baroque. 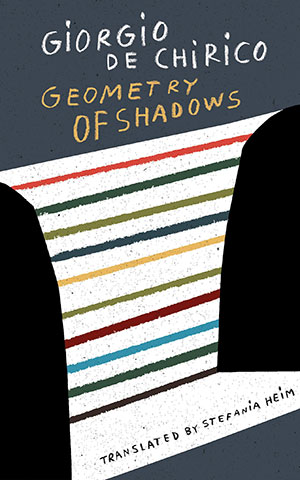 Both of de Chirico moods—the polemical metaphysical and the emotional baroque—are present in Stefania Heim’s wonderful new book, Geometry of Shadows (A Public Space Books, 2019). Heim has collected and translated all of Giorgio de Chirico’s known Italian-language poetry and drafts. This volume is a major achievement of research as well as sensitivity to the complex languages of the original. De Chirico was fluent in Greek, German, French, and Italian. He wrote most often in the latter two languages, through which he nevertheless threaded his multilingual sensibility.

Giorgio de Chirico was born in Greece to Italian parents. His father, Evaristo, was a civil engineer and a talented draftsman. His brother, Andrea, also became a writer and painter (and composer) under the pseudonym Alberto Savinio. In their early lives, the brothers joked that they were the Dioscuri, the twins Castor and Pollux who helped travelers. They worked and sometimes lived together. As young men, they left Greece for Munich, Germany, where Giorgio read Nietzsche. Giorgio often asserted the strong influence of Nietzsche in his work. Later the brothers lived (at times with their mother) in northern Italian cities (Milan, Florence, Ferrara) and Rome. They spent the years just before World War I in Paris. These cities supplied vistas of human architecture—arches, towers, unlikely angles—for Giorgio’s work.

The four years in Paris proved a memorable and fertile interval between his Italian periods. It is fitting that Paris is the subject and metaphor of the glorious, long central prose poem of this volume. In her notes, Heim calls “Vale Lutetia” a love letter to Paris. The poem is also a farewell, a manifesto, and a self-examination. De Chirico describes his arrival in a Paris he identifies as a “northern” city where the “tender gray of the fog . . . connects the sky to the earth and to human constructions which are . . . curious and inviting, solemn and surprising.” Paris for him is unlike Mediterranean landscapes in which the “rectilinear construction has been necessary as a shield against the terrible menace of the implacable sky.” All of de Chirico’s big themes are at play in this poem: confrontations between the built environment and the natural one, the terrors of the imagination, the role of the king and the poet, the ancient world, the discordant contemporary interventions of modernism and futurism and surrealism. In calling Paris by its ancient name, Lutetia, de Chirico employs what the critic James Thrall Soby called his “mythopoetic” thinking.

Heim calls “Vale Lutetia” a love letter to Paris. The poem is also a farewell, a manifesto, and a self-examination.

Throughout Geometry of Shadows, Heim smartly addresses the problems of de Chirico’s poetic and painterly revisions, reworkings, and copies. The painter was notorious for copying himself, sometimes creating “verifalsi” (real-fake) paintings of his earlier, more popular works, for high sums. Heim argues, persuasively, that we should not consider these poems adjacent to the paintings or as keys to them. Instead, Heim presents the poetry in this volume as an independent body of work.

Geometry of Shadows deepens our understanding of de Chirico’s artistic contribution. We can now see him as a member of that elite group of artists who have worked at the highest levels in both the visual and the literary arts. Michelangelo comes to mind first. But when thinking about de Chirico’s place in this group, I note two great poets whose visual art was on par with their literary art. John Ashbery and Mark Strand responded explicitly to de Chirico’s lyric and metaphoric inspiration. Ashbery’s 1970 volume (and title poem) The Double Dream of Spring bears the name of the de Chirico in the MoMA. And Mark Strand’s 1988 Blizzard of One offers a pair of villanelles, “The Philosopher’s Conquest” and “The Disquieting Muses.”

We can now see de Chirico as a member of that elite group of artists who have worked at the highest levels in both the visual and the literary arts.

Geometry of Shadows brings us many voices and gestures, all of which invoke de Chirico’s investigation of those ancient ideas, the muses. A late poem in this volume might stand as Giorgio de Chirico’s least coded ars poetica. In its entirety:

So as not to think about so many amoralities
and stupidities, as about so many horrors,
I search more and more for refuge in that
sacred temple where two Goddesses hold
hands: true Poetry and true Painting. 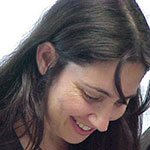 Judith Baumel is a poet, critic, and translator from Italian and Ukrainian. She is a professor of English and founding director of the Creative Writing Program at Adelphi University. She has served as president of the Association of Writers and Writing Programs, director of the Poetry Society of America, and was a Fulbright Scholar in Italy. Her books include The Weight of Numbers, for which she won the Walt Whitman Award of the Academy of American Poets, Now, The Kangaroo Girl, and the forthcoming Passeggiate.