“The opportunity to learn from history’s tragedies has not yet passed.”—Lesley Blume

Released on the seventy-fifth anniversary of the atomic bomb dropping on Hiroshima, Japan, Lesley M.M. Blume’s Fallout: The Hiroshima Cover-up and the Reporter Who Revealed It to the World (Simon & Schuster, 2020) is equal parts historical narrative, cultural commentary, and character piece. In it, Blume tells the story of how a fresh-out-of-work reporter teamed up with a magazine best known for its satire to publish one of the most significant exposés in history.

At first glance, the cover of the August 31, 1946, issue of the New Yorker was misleading. There was nothing in the idyllic day-in-the-park scene to suggest the worldwide significance of the issue-length story inside. After unknowingly spending the month on a decoy, many members of the New Yorker’s staff joined the readership in their surprise at the real issue’s contents, which contained evidence of a sinister government scheme to stifle press coverage of the true aftermath of atomic warfare. Fallout is the story of the horrors of Hiroshima, a massive media cover-up, and the man who ultimately revealed them to the world as part of a harrowing message of hope.

Fallout is the story of the horrors of Hiroshima, a massive media cover-up, and the man who ultimately revealed them to the world as part of a harrowing message of hope.

In seven chapters and an annotated photo insert, Blume linearly narrates the endeavors of American reporter John Hersey as he conceives, creates, and disseminates “Hiroshima,” a thirty-thousand-word compilation of the eyewitness accounts of six atomic bomb survivors. An attempt to reveal “what happened not to buildings but to human beings,” “Hiroshima” was a bombshell in its own right. The information Hersey revealed to the public had been collected in spite of the best efforts of an intense postwar propaganda and information-suppression campaign. Hersey’s work appealed to the conscience of humanity, preserving the memory of the long-term cost of atomic warfare and settling in the global conscience as a powerful plea for peace.

Blume’s book is a reminder to a world familiar with the repercussions of radioactivity that it wasn’t always that way. She reveals a reality of startling lies from public figures, conveniently “lost” articles from atomic cities, manipulation of media outlets in occupied Japan, and aggressive government-approval requirements for published postwar works. Unearthed quotes with sources ranging from Hersey to Robert Oppenheimer educate the reader on the grim setting that necessitated the “exposé” status of the harsh realities of radiation poisoning, a condition co–Manhattan Project leader General Leslie Groves once assured the Senate to be “a pleasant way to die.”

After an introductory recap on the Hiroshima bomb and the “Hiroshima” article, Fallout follows Hersey as he pursues his story from New York to China to Japan and back. His yearlong journey is juxtaposed against the international efforts of the US government to repress information and spread disinformation regarding the aftereffects of their atomic bombings. Upon Hersey’s arrival in Hiroshima, a central chapter is devoted to the profiles and near-death experiences of his six interviewees. From there, the final two chapters, aptly entitled “Detonation” and “Aftermath,” detail the clandestine publication of and unprecedented response to his controversial article. After a summary of the fates of the main characters, the book concludes with an epilogue in which Blume emphasizes the timeless relevance of Hersey’s “Hiroshima” and issues a foreboding request that we heed the lessons of the past as we progress into the future.

In Fallout, Blume takes a page out of Hersey’s playbook, focusing on the humanity of her characters rather than relying too heavily on impersonal statistical data. Fallout’s many quotes and anecdotes are characterized by personality insights, which lend the major players senses of dimension and familiarity. Though historical by nature, the narrative reads like a novel and unfolds like a heist, with Hersey and his New Yorker editors at the helm. While their success is preconfirmed, it becomes increasingly surprising as the story progresses, and the obstacles they encounter and the high stakes they risk make for a thrilling sense of retroactive tension throughout.

Though historical by nature, the narrative reads like a novel and unfolds like a heist, with Hersey and his New Yorker editors at the helm.

Fallout is straightforward, tightly structured, and thoroughly researched: inquisitive readers can find additional reference materials spanning sixty-four pages of meticulously curated endnotes. The prose is jam-packed and doesn’t pull punches, maximizing impact by presenting the contrast between government-endorsed propaganda and Hersey’s survivors’ harsh realities. Even while summarizing familiar events, Blume avoids redundancy, seamlessly blending well-known elements with information gleaned through her own extensive research endeavors. Despite the age of the story, it feels timely and fresh, and Blume’s attention to detail and talent for distilling a wealth of information make for a rich, gripping read.

Though it is easy to read, Fallout is not necessarily an easy read, particularly for the squeamish. It comes with mentions of gore one would associate with recounted experiences of bomb survivors. Descriptions of the atomic impact on victims’ eyes, skin, and other body parts are brief but haunting. “Hiroshima”’s incongruous New Yorker cover assumes a darker, more sinister meaning in the context of its contents, which include eyewitness accounts of evacuations to a similar park, albeit one ensconced in corpses and the shells of bombed-out buildings.

In Fallout, the reader is given a behind-the-scenes look at the creation of one of history’s most influential nuclear deterrents and at the many people who helped make it happen. Anyone interested in atomic history, curious about the inner workings of the postwar propaganda machine, or looking for a universally significant story with both global and individual stakes will enjoy Fallout. It offers insight and personal testimonies of harrowing history without losing the senses of hope and urgency that characterized the original article. It is an anniversary account with considerable contemporary relevance, a story of hope and humanity that comes with a heavy dose of historical awareness.

Though the events of Hiroshima happened a lifetime ago, the themes of Hersey’s endeavors remain startlingly, painfully relevant today.

Like “Hiroshima,” Fallout avoids arguing for or against the world’s first and only forays into atomic warfare. It instead invites consideration of the tangible, intangible, and thematic implications of nuclear conflict and of other issues. In her epilogue, Blume urges us to consider the modern implications of Hersey’s experiences with the wartime death of an independent press, media control, mass dehumanization, and a government bent on preserving ignorance. Though the events of Hiroshima happened a lifetime ago, the themes of Hersey’s endeavors remain startlingly, painfully relevant today.

Fallout is a compelling, unsettling success. Blume’s work, which doubles as a history lesson and a dire warning, provides her readers with a timely and necessary reminder that will stick with them long after finishing the book. 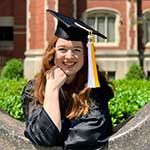 Brenna O’Hara graduated from the University of Oklahoma with degrees in English and biochemistry in 2020. She enjoys reading, volunteering, and playing in musical ensembles in her spare time. She is currently pursuing her MA in English at OU and can be found interning at World Literature Today.