A canonical writer of the fantastic and foundational modernista poet, the reactionary polymath Leopoldo Lugones (1874–1938) was considered Argentina’s greatest “official” writer during his lifetime. Admired by Borges, he committed suicide at an island inn outside Buenos Aires, professedly depressed about his son’s disapproval of his relationship with a young poet. César Aira (b. 1949) distorts those and other factoids into a new novel, Lugones (Blatt & Ríos, 2020), that reads like a Marx Brothers movie script recited by his admirer Patti Smith. The wily Aira being Aira, that is the tip of Lugones’s iceberg.

Probably unchallenged after his prolific output of performative “autobiografictions,” articles about today’s “realism,” or simply jaded by literature’s connections to pictorial art, Aira “paints” a tragicomedy of errors whose only wink to his earlier style is its hilarity. Beyond problematizing a writer’s life, Lugones’s contribution to a Latin American cohort is its inattention to pressing extraliterary contexts. A master of estrangement dismissive of his contemporaries, he queries how readers can take writers, himself included, at their word. During a conversation in the novel’s last pages a talking/writing yacaré (a Southern Cone caiman) assures “Lugones” that the perfect writer is one who exhausts the riches of possible tales and nontales, and if he is a real writer, then he always was one and drained the abundance from the beginning.

Such pithy statements, interspersed throughout Lugones, center on writing processes and their humbling disappointments, on a writer’s true value, and on pseudo-philosophical meanderings, quips, and reveries about the tragicomic last half-century. They are par for the course in an Aira novel. What makes those avowals different here is that they are channeled through the figure of a compatriot who achieved great recognition in predigital times. Aira, whose cultish followers envision a Nobel Prize (he was awarded the 2021 Prix Formentor), is bidding his readers to observe how he may not labor to make his writerly life coherent and could care less about dynastic hopes or comparisons to Lugones. Bold, frequently profane, Lugones thus becomes a larger statement about Aira.

Disguised as Dr. Ferraguto, “Buenos Aires’ most prestigious surgeon”—a circus owner in Cortázar’s Hopscotch, who sells it to buy a psychiatric clinic—Lugones instigates a series of slapstick exchanges with Luisa, the widowed owner of the “El Tropezón” (The Stumble) inn, its irritable residents and disreputable visitors. This becomes a masked ball encompassing the roughly six groups by which the characters can be identified in a novel without chapters or sections. The transformations occur in group dynamics, or in individuals like Pedro/Alberto/Roberto Gálmez; or a character disguised as Horacio Quiroga, another canonical writer of the fantastic and Lugones contemporary who committed suicide by ingesting cyanide. There is also the yacaré Roberto, who was a solid block of ink for a Japanese painter before he engaged in existential and literary chats with Lugones.

It is through analogous conversations among the other characters that one intuits what they possibly think. In the novel, women are mostly desiring machines whose advances Lugones rejects. Keeping in mind the novel’s late 1930s Argentina context, for the first-person narrator “sex is nothing,” even though “it is mostly hidden in the mechanics of its activity.” When Luisa offers to help bathe him, Lugones refuses, adding he cannot touch himself because “women are for that.” These and other politically incorrect statements, even when girded by phrases like “It seemed something inexplicably supernatural,” may say nothing about the real Aira or his innumerable alter egos; but they may mean more about his critics’ reluctance to deal with the implications.

No review can give a comprehensive accounting of Lugones’s plot, because Aira stirs emotional probabilities and misshapes them, suggesting that there cannot be unconventionalities when the entire story is a deviation, even though readers may know Lugones’s real demise. Yet the fictional Luisa can say: “Stop the farce: you are not a doctor, you are Leopoldo Lugones, the author of La Guerra Gaucha, I know you well from Caras y Caretas.” Toward the end the narrator avers, “It was like pulp fiction, but it could work.” Ultimately, the power of Aira’s novels (this would be his 108th, depending on how you count them) is in their implausibility, in their author’s ability to define his misreadings before others can express them. 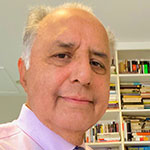 Will H. Corral, who received his PhD from Columbia, has taught at Stanford and other universities in the Americas and Europe and contributed to World Literature Today since 1985, reviewing numerous works by Aira. The author of sixteen books of literary criticism, among them Theory's Empire (with Daphne Patai), his Los peajes de la crítica latinoamericana will be published this year. In 2014 he held the Cátedra Abierta Roberto Bolaño in Chile's Universidad Diego Portales. He is a regular contributor to Letras Libres.