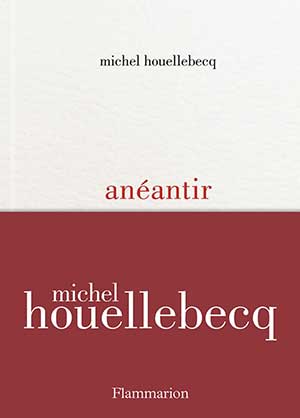 According to Christian Authier, himself a prizewinning novelist and recently the author of Houellebecq politique (Flammarion, 2022), Michel Houellebecq is “uncontestably the major [French] writer of the past thirty years, and [it’s certain that] his work will be present thirty years from now.”

Quite possibly. But “uncontestably”? Derision, debate and scandal have greeted each of Houellebecq’s seven previous novels. His much-anticipated eighth, Anéantir (Flammarion, 2022), a tome of 730 pages specially bound in an illustrated edition, has some critics—Le Monde, for example—swooning. And others wielding knives.

Ever since his mordant debut, Whatever (originally titled Extension de la domaine de lutte) about office slavery, sexual starvation, and failed friendship, I, like Authier, have been a Houellebecq fan. You don’t have to share all a writer’s bêtes noires to admire his verve, insight, and independence. A Swiftian societal pulse-taker, he registers undercurrents as yet invisible on the surface of common life—but sensed by the reader as uncomfortably, excitingly true.

This divining-rod aspect has earned him a reputation as a social prophet (or “idiot-savant,” according to one recent idiot-critic). The evidence includes a scene of beach-bar carnage by Islamists in Thailand that preceded the gruesome 2002 bombings on Bali (Platform), an uncanny heralding of the Charlie Hebdo assassinations (Submission), and a practice run of the uprising of the gilets jaunes (Serotonin).

No surprise that Authier devotes an entire book to the enigma of Houellebecq’s politics. He wades straight in, asking: Is M. H. a conservative? A neoreactionary? An anarchist of the right? A chronicler of the decline of the West? A hedonist, moralist, and/or converted Christian? The answers tend to be “yes, but” or “no, but.” Gauthier’s overview implicitly draws a distinction between Houellebecq’s coherent philosophic standpoint and his specific political positions, which are impossible to categorize.

A Swiftian societal pulse-taker, Houellebecq registers undercurrents as yet invisible on the surface of common life.

There’s no question that Houellebecq is pro-prostitution and fond of sex with teens, but anti-immigration, anti-progressive (as exemplified by the May ’68 uprising, his root of modern evil), and anti-globalization. He is pro-religion albeit a self-declared atheist. “I’m Catholic in the sense that I express the horror of a world without God. But only in that sense.” He abhors the dehumanizing division of labor, the egotism of personal liberty, and change in general. Because, he warns, there is no going back.

That said, most people’s views alter over time. After the deeply pessimistic Serotonin (in which pills, barrels of booze, cigs, and anal sex are useless against the protagonist’s weltschmerz), how does the world look to Houellebecq now? Set in 2027, year of the next presidential election after the current one, Anéantir (Annihilate) opens with the panache of a thriller—a mysterious conspiracy theorist, inspired by a Unabomber-type philosophy, is posting technically mind-boggling terrorist videos, beginning with the beheading of Economics Minister Bruno Juge (aka real-life Bruno le Maire). But Bruno, worshipped by his assistant, protagonist Paul Raison, as the modern Colbert returning France to prosperity and global clout, is alive and workaholic as ever.

In all of Houellebecq’s fiction, storytelling vies with the political and philosophical engine—Houellebecq’s influences include Schopenhauer, St. Paul, and August Comte. In Anéantir, the fiction goes haywire. The initial plot, broken up by Paul’s murkily symbolic dream-sequences (which I learned to skip) peters out in a jumble of loose threads. Enter plotline number two, in which Paul, his siblings, and in-laws reunite around the father, victim of a stroke and potential victim of a horrible old folks’ home—were it not for their brazen kidnapping and rescue of the old man, aided by an international anti-euthanasia militia. This action sequence is undercut, like a number of events in Anéantir, by its absurdity. A real-life institution would gladly release such a patient to home care and free up a space.

In all of Houellebecq’s fiction, storytelling vies with the political and philosophical engine.

Houellebecq’s uniqueness has always been the trenchant truth-telling of the alter-Michels, whose alienated musings can be howlingly funny. In Anéantir, perhaps in order to make his political stance more palatable, alter-Michel is for the first time kind of a nice guy, albeit, like other alter-Michels, passive as a sea cucumber. He admires his deeply Catholic sister, Cécile, his far-right brother-in-law (who lives on unemployment) and above all his boss, closely modeled on President Macron’s righthand economist, Bruno Lemaire. While “reconnecting” with his father after the stroke (it’s not hard to reconcile with a parent who can only blink), he detests his domineering sister-in-law and her hulking Black son—an adoption this monster engineered merely to humiliate Paul’s younger brother.

Let’s talk more about women. It’s generally agreed that they get scant respect in Houellebecq’s novels. But some have maintained that Anéantir represents a conversion: we have the saintly Cécile, the self-sacrificing partner of the paralyzed father, and Paul’s newly affectionate wife. To me, they are two-dimensional servants devoid of inner life. Afraid of disappointing Prudence in bed after many dry years, Paul visits a young prostitute in order to prime the pump. Only after “Mélodie” has delivered a successful blow job (Houellebecq’s preferred form of sex in all his books), for 400 Euros, does he recognize her as . . . Cécile’s daughter, his niece! But, no worries. As the enterprising Sorbonne student kneeling before him says, “Life can be complicated.” Not to mention full of whopping coincidences.

The family sturm-und-drang phase of the book, which even the brother’s suicide can’t save from being boring, drifts off in the last third to focus on Paul’s reconciliation with his wife. This return to an Eden of home-cooking and blow jobs is followed by the onset of a rigorously and tediously researched cancer, just when life was looking up. No spoilers, but let me say I was not moved by the final pages. In short, Houellebecq playing “good guy” and Hallmark-card sentimental can hardly save a poorly constructed, meandering novel.

What, then, of the political component? Houellebecq the seer has a huge readership; is it coincidence that Anéantir came out shortly before the 2022 presidential elections? Seventy-five thousand copies were snapped up in the first two days. So which topics animate Anéantir? In interviews he’s a tepid supporter of the incumbent government, but Paul Raison’s tasteless remarks about Muslims taking over villages are sops to Replacement Theory (a French invention, thank you Renaud Camus). The Times Literary Supplement wrote, with understatement, that in Anéantir Houellebecq “flirts with the extreme right.” In fact he wildly embraces it in the sturdy form of the militant brother-in-law. Houellebecq paints the neglect and malaise of French rural society and the cynicism of elites as well as ever, but these insights are no longer new. I was tear-gassed at the demos myself.

Newer, in recent years, is his impassioned public crusade against euthanasia. In Anéantir, a doctor says, “The real reason for euthanasia is that we can no longer put up with old people . . . we park them . . . out of sight of other humans.” Again, perhaps no coincidence that a proposed law allowing euthanasia under strict controls was scheduled for a national vote soon after publication of Anéantir. Despite Houellebecq’s characters’ desperate arguments for life at any cost, the law passed.

As for second sight on French elections, events leading to Macron’s recent loss of a governing majority do bear resemblance to the posturing and cynical horse-trading among elites described in the earlier part of the novel—Michel at his observant best.

There’s a rumor around Paris, nourished by the author, that Anéantir is Houellebecq’s last book. Maybe he’s tired. 730 pages! Maybe he too senses an imbalance: quantity over quality. But I don’t think he will stop writing, any more than the Stones or Baryshnikov could stop performing. À la prochaine, Michel. 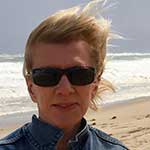 Kai Maristed is a novelist (Broken Ground, a Berlin story), playwright, and translator. Her short work has appeared in Agni, Ploughshares, and other journals, and is forthcoming in Five Points.