A Poet of Liberty and Love: Ana Blandiana’s Five Books 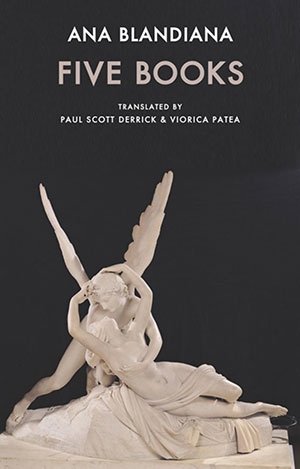 The largest collection in English of Romanian poet Ana Blandiana’s work, Five Books (Bloodaxe, 2021) displays her lifelong project of expressing liberty and love. The winner of the European Poet of Freedom Prize (2016) and the Griffin Trust for Excellence in Poetry’s Lifetime Recognition Award (2018), Blandiana shows her oeuvre’s full range of form and subject matter in Five Books. In addition to her literary accolades, she has received the Romanian Women of Courage Award from the U.S. State Department (2014) and the Légion d’Honneur from France (2009). While her work has been translated into twenty-five languages, translators Paul Scott Derrick and Viorica Patea now offer English-language readers a comprehensive collection from a poet who has contributed to social and artistic transformations for the past half century.

Five Books presents Blandiana’s work thematically rather than chronologically, including two collections of protest poetry (Predator Star, 1985; The Architecture of Waves, 1990), a meditation on postmodernity (Clock Without Hours, 2014), and two collections of love poetry (October, November, December, 1972; Variations on a Given Theme, 2018). Her earlier banned verse in defiance of Nicolae Ceaușescu’s dictatorship (1965–89) mourns the sacrifice of Romanian culture at the hands of totalitarianism, whereas her more universal later work laments the materialism and consumerism of a post-totalitarian society. In the tradition of Anna Akhmatova and Václav Havel, Blandiana bears witness to eastern European history while also offering visionary and meditative verse in the spirit of Emily Dickinson and Rainer Maria Rilke.

In the tradition of Anna Akhmatova and Václav Havel, Blandiana bears witness to eastern European history while also offering visionary and meditative verse in the spirit of Emily Dickinson and Rainer Maria Rilke.

Opening selections from the journal Amfiteatru (1984) and three books of protest poetry criticize the dictatorship under which she and her fellow Romanians languished. Using the recurring metaphor of vegetation to describe the people’s apathy, “Limitations” remarks: “We, the plants / Are not exempt / From illnesses, / Nor madness.” The barren realities of life under the dictatorship bombard the reader in the catalog that constitutes “Everything”: “the queues to buy flour,” “apples rejected after export,” “gypsies smoking Kents,” “ersatz coffee,” “the people’s struggle for peace,” “productivity per hectare,” “the agents on Victoria Avenue.” Predator Star views “the terrors of history” as the origin of tyranny since their resulting apathy causes the people’s enslavement. As “Outburst” exhorts, any upheaval would be better than such inaction: “With every outburst / A god is revealed / . . . / Laughter or tears, / It doesn’t really matter: / As long as there’s an outburst.”

In an attempt to escape this prison, The Architecture of Waves, composed at the end of the Ceaușescu regime, revisits traditional folklore, as in “Exasperation”: “The exasperation of running / Towards nothing and no one, / As the blood runs from a wound — / I’ve learned it from many long histories.” Here Blandiana alludes to the traditional ballads of Miorița and Master Manole to remark upon Romania’s historical predicament as the intersection of the Russian, Ottoman, and Austro-Hungarian empires. Though her early verse uses avant-garde forms to free Romanians from their past, Clock Without Hours resorts to stricter formalism and rhyme to respond to our present afflictions. Blandiana regrets the way in which people have managed to escape tyranny only to succumb to materialism. This spiritual decadence leads her to question the significance of art itself, as in “White on White”: “I write in white on white / Though I know nobody / Can read it, / Not even myself.”

Blandiana regrets the way in which people have managed to escape tyranny only to succumb to materialism.

Finally, October, November, December and Variations on a Given Theme explore poetic creation as the offspring of love and memorialize the poet’s late husband, Romulus Rusan. Like Wagner’s Tristan and Isolde, Blandiana’s October, November, December considers death as the ultimate consummation of love, as in “If We Killed One Another”: “Please die, my love, / My love with the face of October, / Encircled as in icons / By the nimbus of death.” In Variations on a Given Theme, Blandiana wonders about the nature of eternity, considering whether death is a permanent separation: “It seems more likely that we’ll search out each other for eternity in the chaos, just as we did on earth, till we’re lucky enough to come together again.”

Across these five books, Blandiana does not settle such questions or recommend an agenda for solving social problems. Her only insistence is on the ability of love and liberty to resuscitate art and human relationships. Thanks to Derrick and Patea’s faithful rendering of Blandiana’s formal innovations in light of the poems’ evolving context, Five Books will ensure Blandiana’s legacy as a poet with international significance. (Editorial note: Seven of Blandiana’s poems translated by Derrick and Patea appeared in the September 2016 and November 2014 issues of WLT.) 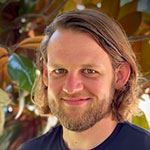 J. Rhett Forman’s (@drjrforman) scholarly and creative work has appeared in Midwest Quarterly, The Round, Agave, Brief Wilderness, Borderlands, Literature of the Americas, Contemporary Studies in Modernism, and anthologies by Clemson University Press. He holds a lectureship at Tarleton State University and received a BA from St. John’s College and PhDs from the University of Dallas and the University of Salamanca.