In the Land of 10,000 Lakes, to which I recently relocated from the land of infinite spectacles, California, summer seems to be one long conversation about canoes. I am clueless as to what people actually do in that elusive, much coveted institution of The Cabin, the birthright of those who have been here for more than one or two generations, dividing the Scandinavian summer gentry from those who had more recently arrived. How slow can you go in these level landscapes? How do you find your bearings when water is all around, when there are no mountains to exhaust you? Lake culture is a shibboleth, drawing distinctions of class, origin, and access. Meanwhile, the lakes’ names—Huron, Ontario, Erie—are overlooked yet persistent relics of the peoples who used to inhabit these lands and of a history of genocide.

In Soliman’s stunning debut, lakes are circumnavigated, and the sublimity of heights and overlooks is replaced with the intimacy of embodied and voiced experience. 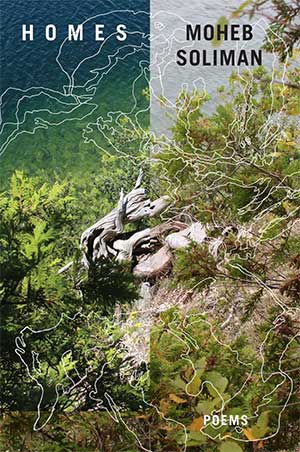 In HOMES (Coffee House Press, 2021), Moheb Soliman’s stunning debut collection of poetry, lakes are circumnavigated, and the sublimity of heights and overlooks is replaced with the patience of the road trip, the intimacy of embodied and voiced experience, and the scrapbook-like assembly of impressions, glimpses, and geohistorical data. HOMES is an acronym for the five great lakes (Huron, Ontario, Michigan, Erie, Superior), and the organizing conceit of this collection of “nature poems” is classically simple: a travelogue, an ode to a geographical location and all that it contains. The collection is inseparable from the physical journey around the Great Lakes, which Soliman first undertook in 2015, and which forms the basis of a large, ongoing interdisciplinary project. It is only fitting that some of the poems of this collection were composed for, and installed in, specific sites, hiding as official signage. The concrete installation suggests the necessity of a visit but also provides a metaphor for Soliman’s poetry, which invites us to visit the lakes with him. “You do not arrive / the place arrives,” he writes, an apt description of the nature poem itself.

HOMES initially presents itself as a diary, each poem latched on to a specific time and place, to minor events like the first swim of the season, getting momentarily lost in the woods (“I was glad we got lost / Glad to know the forest was so insoluble”), or glimpsing “home frame stalled in the exurbs / deer stray in the living room / before the track lights and double-paned / there was a window there / a shudder of the habitat / in the neighborhood.” Yet soon these narrative moments become rhizomatic and expansive, their clarity growing murky and speculative with histories of sunken cities and “invasive” species. The geographical journey is overlaid with an associative journey, in which language disintegrates to sound and reintegrates in new formations. In a poem taking on the vast glacial movements that formed the lakes, Soliman writes of “languorous chaos in the wilderness,” a time in which “language was impossible; vowels confused with consonants—water and continent were one—consonants, and continents; with water, and vowels—” This impossibility is still very much the condition of both lakes and language: land and water continually cutting into each other like meaning and voice do in the poem itself.

The geographical journey is overlaid with an associative journey, in which language disintegrates to sound and reintegrates in new formations.

At times, the encounter with the lakes produces rapt poems of fullness and awe—poems appropriating the traditional position of the Romantic nature poet, overwhelmed by the lake’s foreign sublimity—though these moments are often mediated through delicate irony. “Please be real, beach,” one poem beseeches. Primarily, however, Soliman is drawn to the “contaminated scene,” nature as an element shaped and mediated by the wild life of humans rather than removed from it. The poems are full of Mackinac fudge and reservation cigarettes, shopping carts stranded in the shallow waters and cell phones beeping birdsongs. The lakes are not in some beyond but are “so urban rural suburban,” and the poetic persona is “always on the lookout for more ice and gas the climate changes right before you.”

At his best, Soliman is a traveler through the various Englishes of the region, trying them on in his own mouth to feel how they fit, tossing them around the poem’s expanses. The familiar rhythms of country music, or the disciplined meter of a dirge, filter in and out of the poems, alongside bits of dialogue, billboard signs, snatches of conversation, and orphaned idioms. The Great Lakes appear as a linguistic, no less than a geographic, region. Over the entire collection hovers the question of home and belonging, of who used to live and who now lives on the lakes, and of the encounter between migrant and native (species, names, peoples).

Soliman uses foreignness as a means for estranged observation.

Soliman immigrated with his family from Egypt to the Midwest when he was six years old, and his poems are explicit about the tensions and ironies of “traveling while brown” in America—but this position rarely elicits self-excavation. So much of contemporary writing seems to be driven by the self-absorbed question of “what does it mean to be me here now,” but this collection recognizes that such inquiry is by definition limited, if not narcissistic. Instead, Soliman uses foreignness as a means for estranged observation, a position that allows him to travel through North America’s gas stations and hummingbird cakes and re-create them for his readers as foreign and new, always surprising. After all, once we pay attention, we must realize that “there is no place like home / everywhere we are foreign.” 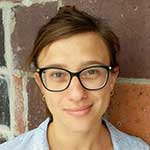 Shir Alon is an assistant professor in the Department of Asian and Middle Eastern Studies at the University of Minnesota, Twin Cities. Her research and reviews of modern Arabic and Hebrew cultures have appeared in WLT, boundary 2, Arab Studies Journal, Comparative Literature, and the Los Angeles Review of Books, among other venues.