Hungarian-born author Magda Szabó lays bare the dangers of settling too deeply into routine as a daughter helps her mother navigate life as a widow. 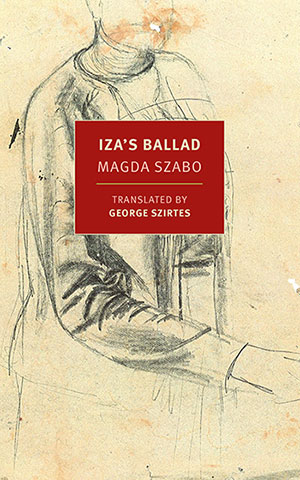 New York Review Books is almost single-handedly rescuing some of the most important literary works from the abyss. Every year they publish dozens of titles that have been foundering in obscurity, some for decades. Hungarian writer Magda Szabó is one of those authors who may not have found a contemporary American audience without the attention of NYRB.

In 2015 NYRB republished Szabó’s The Door, to critical success and brisk sales. Iza’s Ballad (2016), the second of her books to be republished, is magnificently translated by Hungarian poet George Szirtes, who also provides the introduction. The plot to Iza’s Ballad is relatively simple: Iza’s elderly father dies, leaving her equally elderly mother alone in the provinces. Iza takes it upon herself to bring her mother to Budapest in order to live with her. Iza is an only child, a successful doctor, and divorced. What follows is a series of conflicts and negotiations between an aging mother and her adult daughter, both stuck in their ways and both determined to be of use to the other.

Iza’s Ballad isn’t just about the relationship between a daughter and her aging, widowed mother. It’s also about what it means to be at home in the world and the relationship we have to the process of dying and the dying themselves.

In the novel, Iza is headstrong and independent. She is a woman who has the respect of her peers. Ettie, her mother, is portrayed as a lost soul, searching for purpose after the death of her husband. In fact, the most heartbreaking moments in the novel come when Ettie realizes that she has assumed a dependent role. “She thought about Iza every day, Iza who did not abandon her in their last house, who arranged everything for her, who relieved her of work and responsibility, who was looking after her and richly providing for her. And, having thought that, she would feel helpless and break down in tears of shame.”

But Iza’s Ballad isn’t just about the relationship between a daughter and her aging, widowed mother. It’s also about what it means to be at home in the world and the relationship we have to the process of dying and the dying themselves. It’s about the traditional roles of women transforming into more modern, independent roles. It’s about dignity and respect. Although not necessarily a sad book, Iza’s Ballad is an unflinching look at the relationship between mother and daughter when both are stuck in life’s routine. In the end, readers may come away with a deeper understanding of themselves.

Andrew Martino (@apmartino) is dean of the Glenda Chatham and Robert G. Clarke Honors College at Salisbury University. He recently took part in the Fulbright International Education Administrators Program and has been a longtime reviewer for WLT.