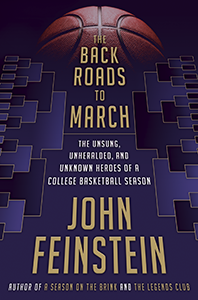 John Feinstein, when he wrote The Back Roads to March: The Unsung, Unheralded, and Unknown Heroes of a College Basketball Season (Doubleday, 2020), probably expected his chronicle of the 2018–19 college basketball season to arrive just in time for this year’s March Madness tournament. But with the Covid-19 pandemic bringing the season to a screeching halt, Feinstein’s book now fills a new role—satiating the cravings of basketball-deprived sports fans with the stories of the oft-ignored players, programs, and coaches whose season-long efforts allow for the magic of March Madness. Indeed, Feinstein writes in the introduction, “I can make the case that those who play knowing they aren’t going to make a living playing basketball care more. And, in many cases, have more interesting stories to tell.” These stories—intimate accounts of Feinstein’s friendships with coaches, funny anecdotes about players’ bizarre journeys into college hoops, and suspenseful play-by-plays of games largely considered unimportant—are what make The Back Roads to March such an enjoyable read.

Feinstein eschews the big-name, big-money teams like Kentucky, Kansas, and Duke and instead follows overlooked players and marginalized programs in small, midmajor conferences like the Patriot League and the Mid-Eastern Athletic Conference (MEAC), which is home to historically black colleges and universities (HBCUs). These smaller conferences are “one-bid” conferences, which receive only one guaranteed spot in the sixty-eight-team March Madness tournament run by the National Collegiate Athletic Association. These conferences are considered unimportant by most—especially by the NCAA. Throughout his book, Feinstein rejects this notion as he travels up and down the East Coast, tracking the seasons of these forgotten college hoops programs and revealing the emotion and drama that live in every basketball game, in every program, coach, and player.

Feinstein travels up and down the East Coast, tracking the seasons of these forgotten college hoops programs and revealing the emotion and drama that live in every basketball game, in every program, coach, and player.

Filled with Feinstein’s trademark humor—“In those days, the Knicks usually lost. Sort of like these days”—The Back Roads to March is a wistful love letter to college basketball and a loving reminiscence grounded in the basketball purity that was lost among the myriad corporate sponsorships, the ever-lengthening TV time-outs, and the one-and-done fervor that grips the top college hoops programs every year. As Feinstein describes the gym at Howard University, an HBCU in the MEAC, he underscores its lack of frills, advertisements, and state-of-the-art technology. He says simply, “This is a gym. This is a basketball place.” It is for basketball places, filled with basketball people without dreams of the NBA or sneaker deals but with dreams of a single NCAA tournament win—with dreams of the game—that Feinstein yearns. And his yearning bleeds through the pages, reaching for the reader like a prayer to save the soul of college basketball.

Feinstein’s yearning bleeds through the pages, reaching for the reader like a prayer to save the soul of college basketball.

The coaches and players whose stories he tells—Jeff Jones, coach of Old Dominion in the one-bid Colonial Athletic Association conference; Jim Phelan, a close friend of Feinstein and former coach of Mount St. Mary’s; Paul Rowley, a second-year law student who stands six-foot-eight and plays for William & Mary; and Chris Clemons, a five-foot-nine guard at Campbell University—are incredibly, irreducibly human. Jones fought prostate cancer and coached while receiving chemotherapy. Phelan lost a son to a heart attack in 2017. Rowley whistles while he plays and ranks 14th out of 186 in his law program, somehow balancing school and sports. Clemons was a North Carolina fan growing up and was ignored by big programs coming out of high school—he ended up as the third-leading scorer in Division 1 basketball history.

Feinstein captures the person underneath the jersey and, writing about another midmajor success story, describes the essence of the midmajor player through Hofstra’s Justin Wright-Foreman, who went largely unrecruited out of high school but was picked fifty-third in the 2019 NBA draft. “Wright-Foreman is one of those basketball stories that get overlooked because they aren’t sexy enough for ESPN or for Dick Vitale to be screaming about him. He doesn’t play at Duke—or any other power—and he doesn’t do 360 dunks that will be replayed a million times in twenty-four hours.” But Feinstein could be talking about any midmajor player, about Rowley or Clemons or any of the many players whose stories are told in The Back Roads to March. Feinstein pulls away the veneer from the bureaucracy of the NCAA, rejects the demand for the façade of monetized sexiness, and looks closely at basketball places and at basketball people—at college basketball, unsullied by corporatization.

When describing one of the most hallowed basketball places of all, Feinstein mentions a plaque that encapsulates the mission of The Back Roads to March. “The roads I traveled last winter are all about the small plaque that hangs on the concourse inside Philadelphia’s historic Palestra, a few steps to the right of the main entrance. It says very simply: ‘To win the game is great . . . To play the game is greater . . . But to love the game is the greatest of all.’” Herein lies the emotional core of Feinstein’s season-long chronicle of the unsung, unheralded, and unknown cogs in the NCAA machine. “To love the game” is the purpose both for writing and for reading Feinstein’s book; “to love the game” is both the “if” and the “then” in the deep-searching question about college hoops’ integrity.

Feinstein’s commanding storytelling is at once intimate and suspenseful, at once heartwarming and heartbreaking. The Back Roads to March communicates the nearness with which Feinstein investigates, challenges, regales, and utterly loves college hoops. It is this proximity that Feinstein brings to the reader as he tells the truth of the overlooked heroes of the college basketball season—as he writes of those who truly love the game.