The best description of America was made some five hundred years ago: “If it didn’t exist, we’d have to make it up.” I found this when researching the Columbus quincentenary of 1992 for Tuscarora historian, artist, and critical thinker Rick Hill (Richard W. Hill Sr). We were doing research for Hill’s Cycles of Prejudice: 500 Years of American Indian Stereotypes, a history and curriculum he had been developing over many years. My suggestion for a title was An American Mythology, and I’ve been using that as a general title, descriptor, and touchstone ever since.

“If it didn’t exist, we’d have to make it up.” And ever since then, everybody’s been dreaming stuff up about America. So much so that, in a real sense, America doesn’t even exist anymore. Everyone is pulling at that mythological fabric until we see our constructs and ideals coming apart, literally before our eyes. Democracy has coexisted with slavery and empire since the beginning—the ones on top describe a shining city on a hill; while some of us are fenced out looking in, some are working on the inside but are “disenfranchised.” What we used to call slavery and indentured servitude, we now just say people are economic hostages and working for a wage with no benefits. This is the civilization everyone fought and died for and threw their families at, hoping a generation would stick.

This is the civilization everyone fought and died for and threw their families at, hoping a generation would stick.

Democracy and America go hand in hand, but “What has Democracy done for us lately . . . really?” John Trudell said that, to me, or to the audience at the American Indian Community House, at a poetry event where we read back and forth sometime in the 1990s. I met John a few times, but reading head to head was a highlight, as was my review of his first poetry collection in the 1980s, Living in Reality. I was also honored to write a tribute that became his obituary for Indian Country Today. John was always being invited to speak at events across the continent and around the world. He always wanted to bring his band, Bad Dog, but grassroots organizations could never swing that request. Toward the end of his life, he made it a reality, touring and playing as often as he could. It made him happy.

The America that Trudell envisioned and spoke about is often talked about by fellow Natives and fellow travelers. Before he walked on in December 8, 2017, his voice is forever tagged onto our hearts and minds in A Tribe Called Red’s (ATCR) 2016 production, “We Are the Halluci Nation.” His voice and words are everywhere in Indian Country and go back to Radio Free Alcatraz, but ATCR introduces a new generation to the ever-changing, ever-evolving soundtrack of Native American activism.

John Trudell’s voice and words are everywhere in Indian Country and go back to Radio Free Alcatraz, but ATCR introduces a new generation to the ever-changing, ever-evolving soundtrack of Native American activism.

“If it didn’t exist, we’d have to make it up.” America is history, is myth, is lies, is therapy. Is America the Big Satan or the Promised Land? America, the concept, is an invention of mass media, and mass media is massage, is propaganda, is the Good Lie, is the Big Lie. The Columbus letters home to Europe started the rampage, the purge, and it started History, since nothing of importance existed before 1492. America is a paradise, it’s a mystery, it’s full of monsters, and it’s a land of Plenty with riches and treasures for the taking. Later on, in creating the concept of Manifest Destiny, America becomes Lebensraum, the land of milk and honey where the streets are paved with gold, and anyone can become a millionaire. It’s the big wide open, it’s where anything goes, its mine, its mine, now you get yours!

America is a paradise, it’s a mystery, it’s full of monsters, and it’s a land of Plenty with riches and treasures for the taking.

America was Terra Nullius, an empty land, there were no borders, no nations, no states, just wandering tribes of wild men, brother to the wolf, livid in a howling wilderness. The Christian Doctrine of Discovery begets a Genocide that begets a Manifest Destiny that proclaims God shines a Light on the ethnic cleansing of a continent and the extermination of a people.

Professor Cutcha Risling Baldy of Humboldt State University teaches The Walking Dead in her classes by explaining that her people have witnessed the end of the world. California Native ancestors crushed red grapes into wine to dull the senses and dim the memory of a particular American Genocide. Our relatives all dead, we were the alive undead, we are seen but unseen, it takes a Ghost Dance to pray our relatives back or for us to join them. Once Pod people crossed the continent in wagons to replace us. We wonder now if the children of colonialism and capitalism refuse the wine of genocide and seek a cleaner drink from a deeper well. We may yet steal your family and turn them Red. This is just a myth and a dream. But American dreams are fantasies, traded, bought and sold. America’s got blood on its hands and ghosts in its head. You have built a nation on these foundations, on these American mythologies.

The Maya believe in Pachakuti, every Katun, and now this Baktun, we arrive at an overturning of the order, a revolution, or an evolution perhaps. If you doubt the Maya, you can turn to your own modern prophet, when the times seem to be due for a changing. Bob Dylan also said, “All the Truths in the World Amount to One Big Lie.” 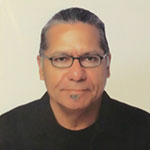 Alex Jacobs (Karoniaktahke), St. Regis Mohawk, has been involved in Native media since the 1970s; anthologized in Native poetry collections; and a founding member of Akwesasne Notes, Indian Time, Akwekon, and Mohawk Nation Radio. He has read poetry from the Nuyorican Poets Café NYC, IAIA Santa Fe, and Amerika Haus in Germany to Talking Stick in Vancouver, BC; he was a freelancer for Indian Country Today (2013–2017); and produces spoken-word CDs with his son DJ Duran Flint. He won a NYSCA Poetry fellowship in 1995 and a LOFT Multicultural Spoken Word Award in 2013.