The year 2016 was one of homecoming for famed Polish American poet Anna Frajlich. Recently retired from her position as senior lecturer of Polish language and literature at Columbia University, she continues to be active on the lecture circuit, with invitations to Kyrgyzstan, Spain, England, and Lithuania, in addition to several poetic readings in New York City. In 2016 she participated in no less than ten events organized in Poland in her honor during the fall. She had readings in Warsaw at the Polish Writers Association, Warsaw University, and Łazienki Palace as well as readings in Lublin and Szczecin. The pièce de résistance was the first international conference held on October 24–25 at the University of Rzeszów. It was organized jointly by the Institute of Polish Philology of the University of Rzeszów, which specializes in postwar émigré literature, and the Institute of Polish Philology of the Jagiellonian University in Kraków, Poland’s most prestigious center of literary studies. Borrowing from one of Anna Frajlich’s poems, the conference was entitled “ ‘Here I am / I inhabit my own life’: The Poetic, Prosaic, and Epistolary Creation of Anna Frajlich.” An art exhibit was also prepared by the faculty of the art department of the University of Rzeszów on the theme of Frajlich’s poems.

Frajlich’s life and work are a microcosm of the entire twentieth century and bear witness to its tragedies, particularly the Holocaust and the Cold War. Claiming her as one of Poland’s most distinguished poets is a paradigmatic revolution in itself, the fusing of exile and homeland.

Putting together a conference about a poet whose identity is as multiple and rich as that of Anna Frajlich can be a challenge, if only because of the difficulty in accessing her work published abroad before 1993. Her early and exile works between 1958 and 1993 are merles blancs by now, her work scattered after 1969 among émigré presses and magazines that are nearly impossible to locate without strenuous research. An American citizen born a Polish Jew in Kyrgyzstan, raised in Poland, whose mother tongue is Polish, Frajlich was marked by exile in Italy and the United States. Her life and work are a microcosm of the entire twentieth century and bear witness to its tragedies, particularly the Holocaust and the Cold War. Claiming her as one of Poland’s most distinguished poets is a paradigmatic revolution in itself, the fusing of exile and homeland. It is also the recognition of an extraordinary life and career. Among Frajlich’s recognitions are the 1981 Kościelski Foundation of Switzerland literary prize, the 2003 Literary Prize from W. & N. Turzański Foundation (Toronto), the 2002 Knight Cross of the Order of Merit awarded by the president of the Polish Republic, and in 2015 the Life Achievement Award of the Association of Polish Writers in Exile. She is also the ambassador of Szczecin, Poland, an honorary title she received in 2008. Her work has been anthologized twenty-one times in three languages and has been translated into at least eight languages (English, French, German, Russian, Romanian, Hungarian, Ukrainian, and Lithuanian). Besides, in the current climate of European politics, the Rzeszów conference sends out a message of tolerance and reminds us that international contacts enrich creation by making dialogue possible between cultures and peoples. Professors Jolanta Pasterska and Janusz Pasterski of the University of Rzeszów, the conference’s main organizers, are to be saluted for their vision and commitment.

In the current climate of European politics, the Rzeszów conference sends out a message of tolerance and reminds us that international contacts enrich creation by making dialogue possible between cultures and peoples.

The conference’s program reflected an understanding of the continuity of specific themes in her work. The largest number of papers dealt with her poetry’s themes: the passing of time, place, exile, emigration, memory, travels, suffering, identity, body image, and women were among the themes discussed. The recurring themes of Polish literature, Jewish history, and Holocaust memorialization in her poetry were evoked along with counterpoints such as harmony/chaos, miniatures/mythographism. Panels also discussed the journalistic, testimonial quality of her work, her book based on her doctoral dissertation,1 and her strategies for literary criticism as well as her indefatigable correspondence with some of the most important cultural figures of Polish emigration such as Kultura’s editor Jerzy Giedroyc; Czesław Miłosz, whom she interviewed after he received the Nobel Prize in 1980; Wisława Szymborska, who sent her many of her now-famous cards and collages; and Wiadomości editor Stefania Kossowska.2 Overall, the conference stressed the global importance of Frajlich’s work and its multidimensionality (titles of volumes of correspondence below). It sets the foundation for future researchers.

A genealogy of Anna Frajlich’s poetic works shows not only breadth of themes and genres but links to some of the most important and prestigious literary circles of the twentieth century. Between her poetic debut in Poland in 1958 and her departure in 1969, she published several poems in magazines and belonged to the Poetry Group in Szczecin and Warsaw. In exile between 1976 and 1986, she published Aby wiatr namalować [To Paint the Wind] and Tylko ziemia [Only the Earth], the latter earning her the prestigious Kościelski Award in 1981. There followed Indian Summer (1982) and Który las (1986). In 1991 she published a bilingual volume of selected works, Between Dawn and the Wind, translated into English by Regina Grol (an enlarged second edition was published in 2006). Frajlich’s first publication in Poland was Ogrodem i ogrodzeniem [Of Gardens and Fences] in 1993 and Jeszcze w drodze [Still on the Road] in 1994. While the first one is a choice of new poems, the second one is a selection from her first five volumes of poetry published in exile, plus five poems from Between Dawn and the Wind and four unpublished poems. Jeszcze w drodze is a segue between her émigré and Polish publications. It is after 2000 that Frajlich’s prose and epistolary publications grew in importance. Finally, the publication of Laboratorium in 2010 contains her life’s reflections and wisdom. As for poetry, three volumes have appeared since 2000: W słońcu listopada (2000), Znów szuka mnie wiatr (2001), and łodzią jest i jest przystanią (2013). Her first two poetic volumes were republished in 2016 under the title Aby wiatr namalować / Tylko ziemia [To Paint the Wind / Only the Earth] by Szczecin’s eleWator, a growing publishing house that is supported by the Henryk Bereza Literary Foundation. The forthcoming publication of the proceedings of the 2016 conference will make it a full circle. 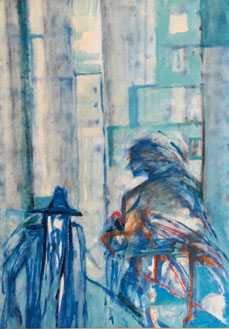 And in the rain I love
the New York spring
today, Good Friday
some carry lilies
while others ride the lift
to the laundry room
beneath the church gates
a homeless man snoozes
wrapped
in a trophy blanket
next to him a bicycle
red, sporty
stands by the brick wall
When he wakes up
he will leave the folded blanket
by the stairs
and he will ride into Good Friday
on his bike.

And opposite
in a glossy gabardine
a Chasid returns from the early
prayers
for it is Passover Friday
sometimes they coincide
the solar calendar
the lunar calendar
– new moon already? –
everyone is asking

and rain, on the cherry trees
just in bloom
and on the huddled heads of tulips,
pours down
and seeps into the veins
of granite.

Easter 2000
Translation from the Polish
By Ross Ufberg 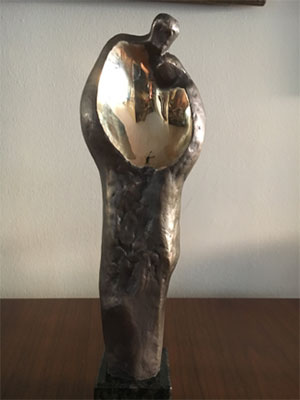 18 July 2006
Translation from the Polish
By Ross Ufberg

Tadeusz Błoński (b. 1947) was trained at the National School of Fine Arts in Yaroslavl and in the Department of Industrial Design at the Academy of Fine Arts in Kraków. A student of Zbigniew Chudzikiewicz, he is full professor in the Art Department of the University of Rzeszów, where he has taught since 2007. He is also an expert in the field of design in the Czech Republic, where he has actively promoted Polish art since 1994. He is active in such fields as painting, sculpture, drawing, photography, installation, and design. His works have been exhibited in Poland, the Czech Republic, Russia, Italy, Hungary, Germany, Japan, Kazakhstan, France, England, and the USA.

Jerzy Kierski (b. 1954) graduated from the Institute of Fine Arts at Maria Curie-Skłodowska in Lublin under the direction of Slawomir Mieleszko. He is associate professor in the School of Arts at the University of Rzeszów where he has taught since 2003. His specialties are sculpture, monumental ensembles, sacred sculpture, and medals. His work has been exhibited in twenty-five individual exhibitions and many more exhibits in Poland and abroad. His works are featured in private collections in Poland, Canada, Germany, and the US.

Ross Ufberg is a translator, writer, and cofounder of New Vessel Press. His work has appeared in the New York Times, Wall Street Journal, and Modern Poetry in Translation, among other places. He has translated over seventy-five poems by Anna Frajlich.

[3] Anna Frajlich, “Wielkanoc w Nowym Yorku” [Easter in New York], in Znów szuka mnie wiatr [The Wind Seeks Me Again] (Warsaw: Czytelnik, 2001). The translation has not been published but has been used in public readings.

[4] Anna Frajlich, Łodzią jest i jest przystanią [It Is a Boat and It Is a Harbor] (Szczecin: Forma, 2013), 68. The translation has not been published.