In this short essay, one of Japan’s early avant-garde writers turns his attention to dust, asking, “Just what kind of game are you playing?”

Look at the blue of the sky, the golden sheen of the sinking sun, the clouds over the colorful glass of Miyanokouji, the work of civilization’s grief.

This is all the magnificent art of dust.

See dust drift soundlessly across the street in the dead of night as though it were possessed by a spirit, a whirling and spinning cloud. It is as though it were a recollection, at once not our own and yet somehow dragged out from within us, the physical conglomeration of our pain.

Look at this, the amazing symbolism of dust.

In front of a store sits an innocent display of fruits, and a crown of white dust adorns each of them, as if to be displayed were a crime demanding punishment. Like a faint glimmer of a tear on a cheek, a fleeting projection of their inevitable rot. And then, above, there is the fading light of a gas lamp on a summer roof, where beneath the virgin boys’ and girls’ belly buttons fill with dust, escaping from them like a sigh with the light of morning.

This, the contumacious trickery of dust.

Dust is the elegy of a city.

It traps itself in the hair of a young, companionless girl wracked with tuberculosis, a girl who trembles and shivers whether you can see her or not, a girl who coughs up blood in a shade of dreamlike red. It hides itself in the stained glass of the church she abandoned, falls in clouds during the sermons of its priest, obscures the cover of her unused Bible, which she is now too distraught to open in prayer.

Dust is the elegy of a city.

Dust follows in the wake of the nobleman’s automobile, summoning a fit of coughing in the old, asthmatic, homeless man. It stealthily hides in the hospital’s curtains, sponges against a patient’s forgotten, wilting hyacinth. Before anyone notices it stains the oil painting in the waiting room, and then, in far-off Ginza, just when the beautiful expressions of shoppers begin to tire, the confusion and hurried motion allows it an opportunity to sully their earnestness.

What a cynical creature dust must be!

In the countryside, too, dust is a requiem.

At times it is as if it were an invisible spirit come to spy, fluttering out from the barley storehouse, out from the closed bakery next door, escaping in the dead of night to ruin the dyer’s knotweeds, freshly hung to dry. Or else it appears deep in the forest, a lonely place where there is no one to see or hear, a place where a despairing heart finds themself amidst a whorl of fallen leaves within the grove where they have lost their way.

At times it is as though it were an invisible spirit come to spy, fluttering out from the barley storehouse.

At other times dust mixes among the people of a festival, stains bright-red hems, clogs toy flutes, covers the skin of the sacred trees with an air of sublimity. It settles in the wounded arm of Niou, the guardian statue, recalling a faint trace of pain. In the light of the God’s altar and offerings it covers even the eyelashes of the pious, forcing them to blink as they bend over in prayer, following the same superstitions as always, even as the altar before them grows dusky and clouded.

The starving sound of a shamisen leaks through the broad daylight of an open-air market. Even without wind, flowers lined by the entrance tangle and fall, their red and white petals piling one after the next until they vanish, packed into the earth. Even without passing travelers, dust rises in white clouds, as if recalling the memory of a crowd. And then, dust again rises in white clouds and falls from the ancient roofs along the road, mixing and gathering in a single layer where it was long ago and will be again.

Even without passing travelers, dust rises in white clouds, as if recalling the memory of a crowd.

In the shadow of a sign reading USED AND NEW CLOCKS, a suspicious selection of gold and silverwork, of rubies, cat’s eyes, sapphires, and diamonds glitter beneath a layer of dust. In the middle of that shadow resound regular ticktocks, each sound followed by the breathing of old dust.  At the base of the adjacent wall, a bald, wispy old man crouches and peers at the inside of a pocket watch through a black magnifying glass, his hesitation washed away by the long half-light of afternoon, his eyes raising only to the spirited passing of traffic.

Dust rises from the galvanized iron of a crowd. In its wake, amber and black smoke cuts an arid wind. In its wake, shreds of paper, straw, fallen lanterns, and clumps of hair scatter and tumble. The old man remembers and remembers the Franco-Prussian War, the long game of cat and mouse, of coming and going while the sun rose and set and rose without ceasing. And so too this moment in the countryside fades into repeated nonsense, grows old and vanishes into white.

When at last it is night, dust rises into the sky like a trail of ash, clouds the heavens high above the capital city, and all night it lingers above like a great fire as it assumes the shapes of mountains and forests before at last it comes to its rest, watching silently over all the sleeping farmers’ dreams.

Dust, too, is an abstraction.

From long ago, those in power have always spoken: “Gold and gems, they all become dust,” “Joy or sadness, it all becomes dust.”

I understand. Religion and morality, it all becomes dust.

Consciousness, materialism, and the present: it’s all eroding into dust.

All of me, even as I grow old and frail, will disappear into the dust of this age. Looking at it this way, you might even say that dust is the true form of the creator, of the origin of the world.

Just what kind of game are you playing?

Is this a comedy or is it a tragedy? Nonsense or earnestness? Should I applaud or heckle your efforts?

Whatever else this world may be, it is indeed a maddening whorl of dust. 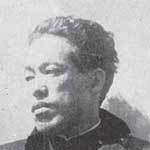 Kyūsaku Yumeno, which translates roughly to “a field where dreams are always growing,” was the pen name of the Japanese writer Taidō Sugiyama (b. 1889). Notorious in Japan for unusual, often downright bizarre detective stories, Yumeno is famous as one of Japan’s first avant-garde writers and as a product of the rapid modernization and westernization of the Taishō era (1912–26). His magnum opus, the experimental mystery Dogura Magura, was adapted for film in the late 1980s. He died suddenly at the age of forty-seven in 1936. 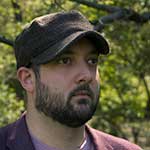 Sacha Idell is a writer and translator from Northern California as well as coeditor and prose editor of the Southern Review. His stories appear in Ploughshares, New England Review, Electric Literature, and elsewhere. His translations include work by the Japanese writers Kyūsaku Yumeno and Toshirō Sasaki. He lives in Baton Rouge, Louisiana.