I Don’t Sing You, America

There is a Red Barn Ice Cream shop near Watertown in upstate New York. There, in the middle of nowhere, was ice cream with real fruit, whole strawberries in a single bite. Cookies and cream. My sisters would lick clean an entire Oreo to give my dad to eat. And he would. This ice cream shop sat to the side of a country road in a gravel parking lot. Much like all of upstate New York, with long rolls of country road and gravel-filled parking lots.

We knew nothing of this place—Watertown, New York. My sisters and I began collecting unknown animals from around our neighborhood in Black River. We had pet turtles and crawfish we pulled from the crick behind our house. Captured fireflies and crickets and all sorts of bugs without names. My mom had the rule back at our house in Long Beach, Califas, of staying out only till the sun went down. In New York sometimes the sun wouldn’t go down till 10 p.m., so my sisters and I took advantage of those long summer days. When we could no longer see the sun, even the crawfish turned this hue of blue, in the great indigo evening.

The first time I remember being called an american was as a child there in upstate New York. Something about holding signs reading “Support Our Troops” written in red/white/blue, wearing Old Navy 2002 shirts that made me feel so loved and holy. Everywhere we went people knew we were military kids. They treated us like royalty. We would get free food, free clothes, and were allowed to go to the front of the line of anything. The movies, the Walmart checkout line, the four-star Chinese buffet. I was this fantastic protected prodigal son in harmony with the entirety of the country. A country I had only recently come to understand existed outside of Los Angeles, a country of black and brown people.

Nights before my dad got deployed to Iraq we would sit around and sing the great American classic, Lee Greenwood’s “God Bless the U.S.A.” Happily we crowded together in the first two-story house we ever rented singing on the first karaoke machine I had ever seen on nights that never seemed to go completely dark. This is what it was like to be american, I thought. To be loved and young and beautiful. To go to a school named Indian River and play lacrosse, with no Indians.

This was before I distrusted white people so I could describe our duplex neighbor aunties as blessed (read, bless-id). They would watch us and feed us and scold us when needed. Our house was one of the oldest on the road. When the aunties bought the old house, it had already been split in two, right down the middle of the grand staircase. They told my momma about a woman who frequented our house as a spirit, loving and caring for any children of the home. My mom encountered her once after scolding and punishing me and my sisters, sending us to our shared room. As she slammed our door and walked away toward her bedroom, she had the door to her room slammed in her face. As she tried to play it off and instead go down the stairs, she felt something heavy on her back, a weight pushing her down. That night she stayed in the kitchen with all the doors and windows shut till my dad came home.

Our pumping and ancestral blood draws maps of possibility across organs and nation-states.

Spirits push every step in our past and future self. Our pumping and ancestral blood draws maps of possibility across organs and nation-states. I can feel the movement of this continent by falling into the histories of my mind. I write different definitions of america daily. And each one burns with the scent of the other. None are in English. The alphabet of my mind isn’t only borderless and free but frees all others trapped at borders, unfree.

My pops and I were talking the other day about the propensity of young black and brown men from the hood joining terror groups such as the U.S. military and police department. An effort to inflict the terror that was inflicted on them in their ruined homes and neighborhoods on those either worldwide (by joining the U.S. military) or those at home (by joining the police). I was explaining this to my pops and breaking down the reasons why my brother-in-law, a cadet for the LA County Sheriff’s Department, is training to terrorize black and brown folk throughout Los Angeles. No father, abused by the streets, a Cuban exile. My dad stopped me afterward,

The alphabet of my mind isn’t only borderless and free but frees all others trapped at borders, unfree.

“So what you’re saying would apply to me too then, son?”

“Well, what you’re saying . . . like I was abused by my dad when I was a kid. And the gangs and the police and everything around us when we were kids.”

“So you’re saying that me joining the army, that I was a terrorist?”

“Yeah, Dad. That’s exactly what I’m saying. You felt powerless as a child, so you wanted to impose some form of power on others. You were terrorized so you wanted to cause terror. The only difference is that you chose to do it in another country.”

And here is where I thought my pops would disown me. That he would throw in my face the schooling the army has given to me. The money, the benefits, discounted Disney tickets. But he was quiet, and I could tell that it was really all settling in on him.

“You’re right,” he told me. “I did terrorize those people over there. I didn’t think so at the time, but, in a way, that’s what we were doing.”

Here, finally, is the riddle: I have made war in Iraq, El Salvador, y Cuba. La Llorona cried to me on a steep Mexican ravine one night after I seent the last great performance of José Alfredo Jiménez in a boxing ring. I once made tortillas for Doña Ramona Buñuelos, I gave her the stamp for all that money and chopped up some tomatoes. El güey Castañeda Castro and I were holed up in the same jail cell one night, where he relayed to me his life and I wrote it all down as Quasimodo. Many years after, I stole diapers for my mother during the LA riots. Marched around Northridge after the earthquake with no bullets. Newly turned OGs in Lynwood know my name. I am the uncle to a soon-to-be black nephew born to a cop and of the highest refined, greatest quality, Salvadoreña/Mexican/Russian monument of piloncillo ever molded. Who am I? 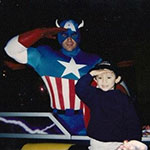 Joseph A. Cárdenas is an MFA student at the University of California Riverside. He is the son of Los Angeles and inmigrantes.