If you didn’t grow up in California, you might not know that in the fourth grade, students have traditionally had to do a “mission project” culminating in the construction of a model of one of the twenty-one California missions.

These projects were a terrible idea for a host of reasons. Few kids ever actually built their own missions. Either the parents ended up doing most of the actual construction, or those poor kids whose parents had some combination of integrity or laziness that prevented them from doing the project for them patched together something at the last possible moment. Years later, a variety of craft outlets started carrying kits that had all the ingredients and instructions for making one of the missions. Eventually, it just became another weird capitalist transaction. You could pay about eleven bucks for the cheap Walmart kit and risk a lower grade or buy one of the more expensive and impressive kits and buy your way to an “A” in social studies.

Who ever thought ten-year-olds were going to create architectural masterpieces out of Styrofoam or sugar cubes that would actually provide insight into California’s history? Even at that age I knew this school project was a bad idea. What’s more, I knew it was patently racist, glorifying an institution that had imprisoned and enslaved my ancestors. I knew this because I had a father who was proudly, unapologetically Tongva. Back then everyone called us Gabrielino, but his great-great-grandmother was the one who recorded our endonym, and we have always been Tongva.

When my class started the fourth-grade unit on the missions, I too found my tribal pride and railed against the untruths and apologies in the textbook with all the ineffective anger of a privileged kid who had never really had to suffer for his identity.

When my class started the fourth-grade unit on the missions, I too found my tribal pride and railed against the untruths and apologies in the textbook with all the ineffective anger of a privileged kid who had never really had to suffer for his identity. I was pissed that they were lying about my ancestors in those stupid and cheesy books. In their world, the missions were all sunshine and light with a confusing bit of Christian evangelism thrown in. Everything was wrong, and I wasn’t going to take it.

With my father, I hatched a plan, my first little act of activism. We would turn the mission project into a statement.

The first stage of our plan was to get San Gabriel as the mission I would do for my project. This turned out to be incredibly easy, because nobody else cared except one kid who wanted to do San Juan Capistrano, for no other reason than he’d been there. The next order of business was to make a spectacular model of the mission. With my father’s help I made a fairly detailed and accurate version out of modeling clay. It actually looked identifiably like the mission and had all the critical distinguishing details. It had to look good and draw attention for the next part of our plan to work.

We populated the mission with scores of tiny but quite detailed clay figures. Most of them were Indians, my tribesfolk rendered in miniature in all their breech-clouted glory. They were gloriously bronze. Everywhere they were being hounded and abused by tiny pale-pink Catholic priests in brown robes, with the occasional soldier in a breastplate thrown in for variety. In a courtyard they were being whipped as they built a wall. On the outskirts they were being beaten as they worked in the fields. There was a mass grave in one corner with dozens of commingled Indian bodies piled in it. The pièce de résistance was a scene of dubious historical authenticity featuring a soldier and a priest crucifying an Indian right before the façade with the iconic bells.

Needless to say, when I brought my project into class, my teacher was horrified. To my delight, my fellow students were enthralled, almost certainly for all the wrong reasons.

Needless to say, when I brought this into class, my teacher was horrified. To my delight, my fellow students were enthralled, almost certainly for all the wrong reasons. I realize now the impossible situation I put that poor teacher in, but I can’t quite feel bad about it. Of course, he sent me to the principal, mumbling about the disturbing nature of my project. I was prepared for that. They called my dad, who was awaiting their summons. He came into the school, dressed in his most dapper professorial attire, and calmly asked what the problem was. When they gleefully displayed my model, he again asked why he was there. They were rendered dumbstruck by this response. When he then explained that this was a wonderfully accurate rendition of the actual experience our ancestors suffered at the mission and went on to detail the rape, murder, and child abuse we suffered at the missions, they literally had no response.

I think they eventually just decided that the best bet was to ignore it and hope it would go away. Of course that didn’t work either. Word of the abattoir I’d constructed spread, and everyone had to see it. To give credit where due, my teacher eventually came around. I think he was eventually just grateful that someone actually cared about history and that something had occurred that made the other kids pay a bit of attention in class. He even asked to keep the model and displayed it for all the remaining years of my elementary education.

This was my introduction to activism, on the smallest of scales, both figurative and literal.

This was my introduction to activism, on the smallest of scales, both figurative and literal. I’m not sure we changed many opinions or brought much awareness, but this memory still stands out as a moment of pride for me and, even more importantly, a moment when my father showed me what it meant to confront the lies that surround our colonized experience. It was a kind of modest protest that taught me the value of confronting false narratives.

The project, with its fetishization of colonialism and its whitewashing of cultural and physical genocide, is inherently terrible, and I’m glad that it was finally banished from the curriculum in 2017. Yet I am still troubled by its passing.

University of California at Riverside 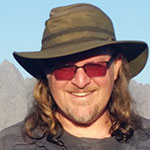 Wallace Cleaves is an associate professor of teaching and associate director of the University Writing Program at the University of California at Riverside. He has also taught courses in medieval, Renaissance, and Native American literature at Pomona College in Claremont, at Cal State Fullerton, and at UC Riverside. He is a member of the Gabrielino / Tongva Native American tribe, the indigenous peoples of the Los Angeles area.