One Week in Reykjavík

I stepped out of Keflavík airport at 4:30 a.m. Far off in the dimly lit parking lot was the bus to Reykjavík—parked, empty, still off-duty. Winds buffeted me from above, the cold air curling its way up my wrists and down my neck. The landscape around me was shrouded in night. I could see nothing but desolate airport roads unfurling like tendrils out into the void. I made my way to the unlit bus, pulled my jacket tighter around me, and waited.

I had come to Reykjavík for a new beginning. This September day marked the official start of my master’s program in creative writing and literary translation—Vermont College of Fine Arts’ new “International MFA”—a program dedicated to literature with a global perspective. And Iceland, a nation with one of the world’s deepest and most abiding literary traditions, would be the site of our first weeklong residency.

But really, what on earth I was doing? I already had a PhD in medieval Italian history, a degree that had gifted me many things—Italian, Rome, lifelong friends, a life of the mind—but not, alas, a tenure-track job. After deciding not to accept adjunct positions, I left academia to try entrepreneurship. I had sewn a fleece vest for my infant son that other parents had wanted. Before long, I had a business designing and manufacturing outerwear.

As an entrepreneur, I was inspired by all there was to discover. If the past is a foreign country to some, so running a business was to me. I could not have traveled farther from the archives of Rome had I tried. And I reveled in that. I took pleasure in living in the present, far from books and pens and paper.

After five years of scheduling production runs and forecasting inventory, I passed a bookstore and caught myself eyeing Donna Tartt’s The Goldfinch. Although years had elapsed since I had last read a book for pleasure, I bought the hardcover and gulped down its eight-hundred-odd pages in two days flat. It was just the beginning. Tartt led to Solnit led to Davis led to Morante, and so on. I began writing in the early mornings and, after a year, decided to apply to MFA programs.

After five years of scheduling production runs and forecasting inventory, I passed a bookstore and caught myself eyeing Donna Tartt’s The Goldfinch.

But I was still skeptical, and I fretted at every step. I worried that the degree would be useless, or worse, suffer from a lack of rigor. I had the impression, furthermore, that MFAs were for people who didn’t know what to do with their life. People who needed externally imposed deadlines, or who sought guidance on things they could perfectly well figure out alone.

Was I now one of those people? I had to face the possibility that yes, I was.

As I stewed in my doubts, shivering with cold, the bus driver finally appeared. A burly man in a down jacket, he nodded gruffly, checked my ticket, and swung open the doors. Resting my backpack on the seat, I pulled out my old copy of Halldór Laxness’s Independent People and began to read: “In early times, say the Icelandic chronicles, men from the Western Islands came to live in this country . . .” It had been nearly two decades since I had last opened the Icelandic classic that in 1955 won Laxness the Nobel Prize. I remember settling down to read it one gray winter morning, and under its spell an entire afternoon, evening, and then weekend slid by. By the time I finished, a storm had swept central New York State, leaving my flimsy graduate housing unit sagging under two feet of snow.

As the bus now wound across the barren landscape, a fierce dawn sun began to glint, filaments of gold striking black volcanic hills. In those hills, I began imagining Bjartur of Summerhouses—Independent People’s curmudgeonly protagonist—stepping from rock to rock as he herded his sheep to fertile territory. I had never been to Iceland, but now, ensconced in its landscape and rereading the story of Bjartur, two Icelands were coming to life—the physical land before me, and the images and stories accumulated from years of reading literature and studying history.

I had never been to Iceland, but now, ensconced in its landscape and rereading the story of Bjartur, two Icelands were coming to life—the physical land before me, and the images and stories accumulated from years of reading literature and studying history.

I attended grad school at Cornell in the early 2000s. Back then, Iceland was in the air. I had enough Icelandic friends in Ithaca that, by my calculations, I was on a first-name basis with a not-insignificant percentage of the total Icelandic population. I had been to more than one midwinter rotten shark party. Every other Ithacan had a hot tub and a kind of fervent devotion to socializing in warm, churning water. I had lifted shots of Brennivín, cheered skál, and, come morning, been sold on the merits of Skyr. You could well have called Ithaca “Iceland-upon-the-Finger-Lakes.”

Being a medievalist compounded this exposure to things Icelandic. Although Italian history was my pane and burro, in our circles, studying Old Norse was commonplace. It rumbled through our ears at workshops, lectures, even at parties. For a class on medieval law and violence, we read Icelandic sagas and frequented Cornell’s renowned Fiske Icelandic collection, whose curator was knighted in 2014 by the president of Iceland.

For many years, this exposure—some of it incidental and some embedded in my studies— was just one thread among many in my life. At the time, this thread hadn’t seemed to lead anywhere. And yet as I neared Reykjavík, the alienation plaguing my arrival began to peel away. It started, to my surprise, to feel like a homecoming.

The bus dropped me off within blocks of my hotel. The receptionist greeted me warmly, informing me that today was the first sunny morning in almost two months. “Everyone is in a good mood!” she chirped.

She then delivered the bad news: my room would not be ready for another eight hours. “But you can explore Reykjavík!” she said, pushing a map across the counter and energetically circling locations of interest.

I headed for the municipal baths. The introduction to hot tub life I had gained in Ithaca certainly begged further exploration. After a mile-long walk through Reykjavík, and following a thorough study of the bathhouse rules under the watchful eye of the locker room attendant—NO bathing suits allowed in the showers! You MUST wash your private parts with soap!—I ventured onto the quiet, sunny patio, where, after a few immersions in pools of various temperatures, I ended up in the kiddie pool, which had the advantage of being both empty and shallow. I stretched out in the warm, foot-deep water, rested my head on the edge, and drifted into what must be the most sublime slumber granted to anyone, ever, in a municipal pool. I awoke a whole hour later, feeling several years younger and substantially cleaner.

On my way back, I stopped for breakfast at the Sandholt Bakery, where I ordered Skyr með kompot, Skyr with a bowl of jam. I listened to conversations in Icelandic—and also, unexpectedly, in Italian—and wondered what had become of my Icelandic friends from Cornell. Could they be here, perhaps even walking past the café window? I sensed that loose thread of my life coming around, tying in ineluctably to my present.

The residency kicked off that evening at a local bar. After a seven-year hiatus, I was once again in the company of people talking about books and authors, writing and translation. Numbering nine students and four faculty, we had come from all over the world. Despite our differences, I knew I was among my people. Each of us was grappling with what it meant to write in English, or to ferry a text into English from another language, culture, or period of time. For some, English was our mother tongue; for many, it was not.

Each of us was grappling with what it meant to write in English, or to ferry a text into English from another language, culture, or period of time.

Over the following week, our workshops, lectures, meals, and meetings took place all over Reykjavík, introducing us to cultural institutions such as the public library, historical societies, and literary venues. We met professors of literature and editors of literary magazines. We read the work of, and met, contemporary Icelandic writers. We learned about the competing desires among young Icelanders to embrace their local language and to abandon it for the global language of English, and we debated what it means to be from an island, to write in a “small language.” We visited Halldór Laxness’s home and conversed with his granddaughter, herself a writer of consequence. Our whole group came away from that visit feeling, as one faculty member put it, “touched by magic.”

The week in Reykjavík was indeed a new beginning. And although I could never have known it on that cold morning of my arrival, it turned out also to be a continuation. Threads that once seemed so disparate—medieval Italian history, running a start-up, becoming a writer—I began, during that week, to see as interlaced. I realize now that behind all three was the same spirit of exploration, the desire to discover new territories, new ways of being in the world. And all three require you, at least a little, to throw caution to the wind.

As the bus ferried me back to Keflavík airport, sun glinted off the countless small rocky plateaus that stretched between me and the horizon, lighting them up, as if from within, a verdant—almost iridescent—green. The good weather would not hold for long. Storms, rain, and the long, dark winter would soon roll in. I was fortunate to have glimpsed Reykjavík shimmering under sunlight. And to have glimpsed, too, the new direction opening up before me. 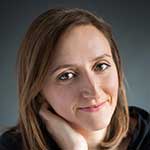 Alizah Holstein (www.alizahholstein.com) holds a PhD in medieval history from Cornell University and currently works as a freelance editor and translator. She is writing a memoir that explores the relationship between her own past and the collective sense of history, focusing in particular on Rome. In fall 2018 Alizah joined the first cohort of the International MFA program at Vermont College of Fine Arts, where she concentrates on creative nonfiction and literary translation.