The Patriots: On Reading Becoming in Tehran

A writer in Tehran incapable of entering the US under the Muslim travel ban encounters Michelle Obama’s Becoming in a beauty salon. Reading the Farsi translation, she finds encouragement in its pages.

Every Fourth of July, I question my American friends’ patriotism. I email them Independence Day congratulations, attached with pictures of the American flag. Many of my American friends don’t show much interest in my Fourth of July congratulations. Like my friend Sam. He thinks differently about the idea of the flag, national anthem, and patriotism. Sam believes that the flag is not sacred; it’s just a symbol. He says he doesn’t need to wrap himself in the US flag to demonstrate that he is a patriot. To him, patriotism is more than just following a flag and cheering for the politicians who wave it. Although Sam was born and raised in a military family with right-wing political views, he is very leftist.

Since November 2016, Sam has lived in a number of European countries and recently settled down in northeastern Africa to serve as a health consultant. He doesn’t like living in the States anymore and thinks of himself as a citizen of the world. Once I asked Sam how he feels when some people of other countries—including Iran—burn the US flag. He smiled and said, “I understand that it’s a statement. We—the Americans—burn our flag to make a statement, too. For some Americans the flag is sacred, that’s true, but for the ones like me who understand the freedom of speech, it’s different. I’m the son of a Vietnam War veteran, and I lost my father for this country. Who can be more patriotic than me? But this country is a mess right now, and as an American, I’m not proud of the US, where good people like you are not welcome.”

As an Iranian woman who was born to Muslim parents, I’m not welcome in the United States under the Trump Muslim ban.

As an Iranian woman who was born to Muslim parents, I’m not welcome in the United States under the Trump Muslim ban. Although the US has broken my heart, many times in different ways, I’ve never stopped loving it, and I never will. Maybe that’s the reason I’ve been devoting my life in Tehran to keeping the literary conversation between our countries alive and urgent, through reading and writing about the US. Over the past two years, I’ve been writing nonfiction essays about my relationship with American literature and its art, and most of these essays were written in my room in Tehran—my little America.

I never thought that one day I would be able to write about the most famous woman in the United States—the former FLOTUS. I never expected that a beauty salon in northern Tehran would be the place

where we could meet. Well, of course, we never met in person. But in a beauty salon in northern Tehran, I found her portrait staring at me from the cover of Becoming.

Among Iranian women, Michelle Obama is considered by far to be the most charismatic FLOTUS.

First ladies of the United States have always been headline news among Iranian women. From Jackie Kennedy’s sunglasses and scarves, to Hillary Clinton’s pantsuits and hairstyle, to Melania Trump’s heels and flats. But things are very different for Michelle Obama. She’s highly regarded among us as an intelligent and courageous woman. Among Iranian women, she is considered by far to be the most charismatic FLOTUS.

I was a little surprised to see her book because I had no idea it had been translated into Farsi and published in Iran. To be honest, the Farsi translation of Becoming wasn’t what I expected, and I wish I could first read it in English. But the translated version had received very serious attention among Iranian readers, especially young women, and it quickly rose to the top of the best-seller list. Reading Becoming in my tiny room in Tehran was like having a journey in my life. The book, especially the first section— “Becoming Me”—took me to my childhood and my first encounter with the anti-Americanism in postwar Tehran.

Where to start? My first vivid memory of the US goes back to the days I entered primary school at age seven. It was where I first faced my country’s anti-American policies. Every Fourth of November—the anniversary of the hostage crisis—the school principal made us sing the anti-American anthem and then cry out that famous slogan: “Death to America!” It was cold and early in the morning, and the school principal made us shout it so loud that even the White House would hear us. I had no idea where the US was located on the world map or what kind of people live there. I thought the White House was a person.

My mother laughed. “It’s overseas, far away. When we are ending our day, the Americans are starting their day; when we are eating dinner, at the same time, they are eating their breakfast. People who live there are like us, little girls like you play hopscotch, and little boys like your brother play soccer.” She paused to run a brush through my hair. “Americans might look different from us, but we all have one god. So we are all brothers and sisters. I’ve never been there, but I’ve heard that it’s a lovely country. They call it the dreamland.”

My father interrupted: “It’s a house that is ruled by white Americans, the white Christians.”

My mom looked at my dad questioningly. “Okay, Shohreh. Enough for tonight. Time for bed.”

“Why does the principal burn their flag if they are our brothers and sisters?” I said. “Do the Americans burn our flag, too?”

She responded helplessly. “The principal should have never done that. Burning the flag is an ugly thing to do. But promise you will never talk about these things at school. Do you hear me?”

That night was the beginning of a double life for me in Tehran. The US became a mysterious thing to talk about, a taboo. What my dad said about the White House stuck in my mind for years. And it mostly came true in 2001, and then 2003, when the US invaded Afghanistan and Iraq.

Yet the 2008 presidential election in the US proved that my mother was also right about the dreamland. For the first time in history, an African American woman became the FLOTUS. On January 20, 2009, I was twenty-two and was about to start studying English and American literature at the university where Azar Nafisi—the author of Reading Lolita in Tehran—once taught English and American literature.

Reading Becoming in Tehran, especially the second section—“Becoming Us”—took me back to the good old days of the university where I created my path and started my own journey. I found the second section of the book deeply personal, emotional, and also extremely feminine. I found Michelle Obama to be a highly intelligent, complicated woman but at the same time very stubborn and simple. A courageous figure who broke the taboos of the political world. What I loved most about her is that she considers herself “not a political person.” Maybe that’s why she will never run for the presidency—despite what Michael Moore wants. I prefer to see Michelle Obama not only as the FLOTUS and Barack Obama’s wife but as an intellectual figure, a progressive leader, a courageous role model, a fashion icon, and an educator for women all around the world.

What I loved most about her is that she considers herself “not a political person.”

As a Middle Eastern woman, I don’t look at the US as Sam and my other American friends do. I see it from my Middle Eastern point of view. I think both my father and mother could be right. My father—as a secular—was right to see the rise of white Christianity as a significant danger for the world. And my mother—as a Muslim—was right to view the issues with hope and faith. 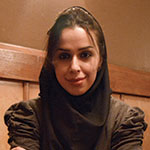 Shohreh Laici’s work has been published in the Millions, the Brooklyn Rail, the Quarterly Conversation, Asheville Poetry Review, Poetry Daily, Two Lines, and World Literature Today. You can read her essay “Trout Fishing in Tehran” in the March 2018 issue of WLT.