In one dream I was trying to hang out with my friend the doctor, but he got lost in the crowd. People moving through the dark, citizens dispersing on avenues of night. Lincoln Heights and East Broadway could be adjacent to Seattle’s Lake Union industrial flats (which aren’t there anymore), where I walked up with a note on a piece of paper to strikers outside a plant and asked if they were hiring. “Yeah, if you want to be a scab, you scab!” the guy snarled. Behind the night universe of clouds and mountains of the past. My wife was pregnant, Seattle had double-digit unemployment, but I walked off looking for a job elsewhere. My friend, the doctor (who wasn’t a doctor yet), helped out the night the baby was born, in a winter storm on the Olympic peninsula, Hoh River in flood. The baby was born before midnight in a clinic in a town called Forks, and the sun came out in the morning, as my friend and I awakened in the car in the parking lot. A raven was eating butter we’d somehow forgotten on the hood in the crazy rush of packing up our tent in the dark, in the Hoh River campground where Dolores told us her water had broken. Logs boomed together in the roaring surf on Rialto Beach. We had hiked through the flood and watched tall trees float downriver into ocean waves in the rain.

Jimmy graduated from UCLA med school and worked as physician for farmworkers and the rural poor for three decades, and the last time I saw my brother, Paul, alive was at Jimmy’s wife’s memorial. The families gathered after the service for Wendy under the pines on Jack’s Peak. Paul chatted for less than an hour, and then I let him nap in the front seat of my vehicle while Dolores and I took a hike through the forest overlooking Monterey Bay and the coast undulating south to the Carmel Valley. Paul was exhausted by the afternoon, so I walked him upstairs to his door. He died that fall, in November, before Thanksgiving. Sabro and I drove up together and cleaned out his place, and the following year I found a message on the message machine from Paul (on the land line that we’d stopped using) saying give him a call when I got a chance, all right?

I worked for three decades teaching writing and literature in East LA to kids grades seven to twelve, to college students and adults, in public schools and people’s houses, in colleges, in the downtown public library and community centers. For seven years I mentored students in a poetry group started by Rubén Martínez. For seven years I was the teachers’ union chairperson, crisscrossing the city doing community organizing and attending coalition meetings. I filled little notebooks with dates and meeting times, names and phone numbers. I still drive all those streets in dreams. For seven years I practiced gōjū-ryū karate fifteen or twenty hours per week at a Little Tokyo dojo and the East San Gabriel Valley Japanese Cultural Center. For seven years I got four to six hours sleep each night and could fall asleep sitting on any couch anywhere, my little notebooks asleep in my pockets, my wristwatch ticking away tiny minutes of peace. I carried little books of poetry everywhere, on road trips and work brigades to Central America; I was writing all the time in my mind, always wondering about Bertolt Brecht versus García Lorca, Mayakovsky versus César Vallejo, Gary Snyder versus Jayne Cortez. My wife gave me Saturday each weekend to write it down. Otherwise we were making a household and raising our kids.

I carried little books of poetry everywhere, on road trips and work brigades to Central America; I was writing all the time in my mind, always wondering about Bertolt Brecht versus García Lorca, Mayakovsky versus César Vallejo, Gary Snyder versus Jayne Cortez.

When the mayor of Los Angeles disregarded the sister-city invitation to send writers to the Mexico City Book Fair, one of my former students (who had become an artist and writer) helped organize a delegation and asked me to join. We read poems under tents in the Zócalo in front of the Palacio Nacional and in theaters nearby in the Centro. We gathered for a breakfast buffet on the penthouse balcony overlooking the Zócalo with Daniel Hernandez, Luis Valdez and his wife, Reed Johnson, Cara Baldwin, Tom Hayden, Luis Rodriguez, Mario Ybarra, and Karla Diaz. Among the hundreds of thousands of people flowing through the Zócalo daily, I was the only one I saw on crutches, having broken my ankle in the Stehekin River, backpacking in the North Cascades National Park. Leaving Mexico City, I was helped at the airport by another former student (Paula was visiting family in Mexico, embarrassed to admit she did not write poems anymore; now she lives in Miami and works as a producer for Univision); she helped carry my duffel bag through the terminal. I told her it was okay that she didn’t write poems anymore, “although your poems were really wonderful! Using your writing skills to make a living is important, too.” Paula and I pushed through the turnstiles, exchanged hugs, and went our separate ways.

Poetry is only one way to stay in love with life, to drive a rendezvous with dreams. 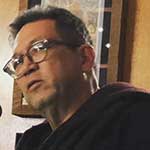 Sesshu Foster has taught composition and literature in East LA for thirty-five years. His most recent book, City of the Future, won a 2019 CLMP Firecracker Award. He is collaborating with artist Arturo Romo on the novel ELADATL, to be published by City Lights Books in fall 2019.