A writer reflects on her relationship to home in Beirut.

Why the windows of the room did not shatter from the August 4 explosion is still a mystery. The building is only five kilometers away from the port of Beirut, and the windows of the neighbors’ apartment broke. In other buildings nearby, even the aluminum frames came off; photos circulating showed the big metal pieces, mixed with glass shards and drops of blood, covering disordered furniture.

My childhood bedroom is all makeshift. It was constructed out of the big balcony of the second floor of my parents’ apartment when my little brother arrived. I would walk through the room I used to share with my older brother to get to it; a flimsy accordion door separated the two, replaced years later by a sliding glass door. A fake ceiling covered the tin roof, and half of the walls were made of windows.

The civil war had just ended, and slowly the cityscape filled with such enclosed balconies. They made for bigger living rooms and tiny maids’ rooms. None of this was legal. Nor were the luxury high-rises that arose by the sea and blocked what little view I had of the water. I was left with a view of the antenna- and electrical-cable-dotted cityscape but also two buildings down the street, a rooftop pigeon farm and, just ahead, across a parking lot, the thoroughfare that led to the east of the city. From the road, you could see the two protruding rectangles of aluminum frames filled with gray blinds that I mostly kept closed.

Thunderstorms became a constant reminder of the bombings, threatening to shatter the glass above my headboard.

When it rained, I could hear every drop of water bouncing over my head, and when it thundered, the whole room shook. The shaking felt the same when Israeli bombs fell outside and inside the city when I was twelve, fifteen, and twenty-two. Thunderstorms became a constant reminder of the bombings, threatening to shatter the glass above my headboard. It never did shatter. It did not either when, at thirty-six, walking my two-year-old on a sunny summer morning in Evanston, I received a WhatsApp message from my parents telling us of a huge blast. My phone kept beeping with videos of the mushroom cloud, of the buildings that crumbled, and of the screams and shouts of the wounded and the stunned.

Every time I returned home since I left at twenty for graduate school, I found something changed in the room. One year, the room was painted apple green. It was unbearably green, so one of the walls had to be made white again a few days into my visit. Gone, on another visit, was the oak closet, the bottom of which had been decomposing from the rain that leaked into the room. In its place was a massive new one of a darker color, the first step toward the dismantling of the matching bedroom set. Not long after came the new, custom-made shelves, designed to fit right under the wide window. Books migrated there from different corners of the house, and I often spent the first morning of my return, as the bright Beirut morning sun warmed the room, clearing away the books that were not mine and adding the new ones I brought back. Years later, our bedrooms were reconfigured to create a narrow corridor leading to both. My room now has a wooden door with a lock.

Just before our last visit, the second floor of the apartment had flooded because of a blockage in the drain of what remained of the balcony. Water rose up from beneath the wooden floor days after and soaked my toddler’s travel crib, which was left in a corner because he refused to nap in it out of excitement to play with his teta and jeddo. To have made it back, to lie on the new king-size bed that takes up half of my expanded room, attempting in vain to convince my happy child to sleep, and then to bring him downstairs to my delighted parents for more songs and games and videos and food, was soothing in a way that only home could be.

As a child, I would hide under the covers with Letitia, the doll I named after my only school friend in Paris, where we fled for a few months during the civil war. Letitia was then moved to the ever-changing closet, but her mere presence gave permission for childlike sorrow, even in later years. I happened to be home one summer during a particularly painful relationship ending. I remember the harrowing feeling of emptiness that haunted me in those days of heartbreak, creeping up on me with the first light of dawn, accompanied by the call to prayer and the cries of the mating cats. But slowly also arose the city’s morning noises, the construction drills, horns, screeching motorbikes, shouting neighbors, loud peddlers, and radios blasting with pop songs. And then, as morning grew, the sounds from the lower floor of the house ascended, doors slamming, washing machine beeping, phones ringing, laughter and conversation, all filtering through to my room. They seeped in, dissolving the years I had spent away from home. Downstairs, my father would be reading the newspaper on the wicker chair, my mother working on her laptop on the living room couch. I would go down, kiss them both on the cheeks, go to the kitchen to make coffee, and then go about my day, sad but soothed.

The friends I saw on this last visit all said that they wanted to leave the country. But I had become a stranger to the wounds they spoke of, their memories of the blast, their lived experience of a country in steady and relentless downfall. My life was elsewhere, at a romantic distance from theirs. All I had wanted in the preceding months was to go home.

Until this past year, I had come back home every year since I left, seventeen years ago. I had brought back letters from my adult relationships, safeguarding them in the nightstand of the only room that has remained constant amidst the shuffle of apartments and cities that has been my life. Tucked deep inside the drawer of a new vanity desk are also the remnants of my sporadic childhood efforts at keeping a diary: a light purple Barbie diary with a lock, one with a lined plastic cover and scented papers of different colors, one of cardboard and decorated with flowers, a plain red notebook with the word “College” on the cover, and a small, pink, spiral-bound journal. I leaf through them every time I return, invariably embarrassed by my restless younger self, but also invariably recognizing my present self in it.

A few weeks before we made this trip, I learned that I was pregnant with twins. The news overwhelmed me. Going home felt risky, and not going home depressing. I chose the glass and aluminum refuge perched above six rows of mismatched curtains and awnings in a city prone to being rocked.

Furniture will undoubtedly have to be moved out to make way for two more cribs. Rainwater will undoubtedly continue to leak, and the room to shake from the roaring of thunder. And I will undoubtedly ask myself every time beforehand whether I should, or should not, go back home. I just do not know how to have two little girls and not to wish that they get to brush Letitia’s hair, surreptitiously discover their mother’s adolescent notebooks, or wake up to the sunlight shining in on her childhood bedroom. 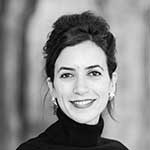 Loubna El Amine’s essays have appeared in the Boston Globe Magazine, Litro, the Chicago Tribune, and the Chronicle of Higher Education, as well as in various Arabic outlets.