The fictions of Ukrainian-born writer Felix Krivin, “punctuated by sharp irony and acerbic humor,” have been described as “fairy tales for adults” that “illuminate with an unexpected light.” Krivin himself called them “half-legends,” consisting of “two halves: truth and legend” (Haaretz).

“Room must be open,” Door Handle thoughtfully remarks when the door is opened.

“Room must be closed,” she philosophically concludes when the door is closed.

Door Handle’s convictions depend on who pushes her.

One had served without a single complaint for many years. One’s great virtue had to be distinguished! That’s why it was decided to raise One to a power. The promotion was to be limited, but One continued to serve diligently and, regarding complaints—not a one! So One was raised to another power. Again not a single complaint. And then One was raised to a third power, a fourth, a fifth—no complaints! One went far. Now it’s One to the thousandth power. If you look at it, an ordinary One, but oh! when you take a look at One’s power!

“Look how lovely our room is,” Curtain says to the Trees outside.

“Look how lovely our street is,” Curtain says to the Furniture in the room.

“We can’t see anything,” the Trees answer.

“We can’t see anything,” Furniture answers.

Window to the World

In old times, people liked sitting by the window, but now they sit in front of the TV. The TV shows you more. Not only can you see the street, you can even see different countries. The window calls for a stroll and a breath of fresh air, but the TV prefers everyone sitting at home in front of the TV. Everyone sits, and the TV shows how other people take strolls and breathe fresh air. Those who breathe fresh air have such good complexions.

Especially on a good color TV.

“Perhaps I will stay here,” Sole said, breaking away from Shoe.

“No, let’s wander around some more!” argued Shoe.

But Sole had turned into a mope. “I can’t anymore,” she said. “My ideals have all been trampled.”

“Ideals?” Shoe exclaimed. “To think, ideals in our time?!”

So Shoe flopped onward. Refined Shoe. Fashionable Shoe. But without a sole.

A young boy bought a book from a store called One Must Behave. Evidently, some believe such a book can be useful for a young boy.

When everyone had gone out, Book decided to have a look around her new home. Careful not to hurt herself, she leapt from the bookshelf and headed for the other rooms.

She soon encountered Tear-off Calendar. Not many pages were left on him (because this occurred in December). Calendar wasn’t troubled by this and even seemed merry.

“Naughty children!” Book said indignantly. “How can books be torn like that?”

Book couldn’t understand him. She contained no mention of calendars. And so, muttering under her breath something educational, she moved on.

On the desk, she saw Paper.

Then, for a long time, she lectured Windowpane for looking outside (“You’ll catch a cold!”). She explained to Pendulum that one shouldn’t swing back and forth like that. To Jug, she insisted that one mustn’t play with water. And on and on . . .

Good thing no one paid attention to Book’s words. For what if she were listened to?

Translations from the Russian
By Anna Burneika 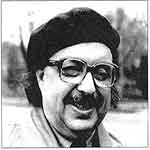 Felix Davidovich Krivin (1928–2016) was a Ukrainian writer, poet, and screenwriter who was elected to the Writers’ Union in 1962. The author of more than twenty-five books, he worked as a radio journalist and proofreader before serving as a contributing editor at the Zakarpattia Oblast publishing house. He immigrated to Israel in 1998. 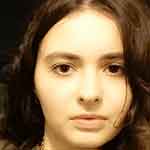 During and following her studies in the international BA program in Israel, Anna Burneika assisted theater directors in Ukraine to stage new productions of Arthur Miller’s A View from the Bridge and Simon Stephens’s The Curious Incident of the Dog in the Night-Time. She has translated more than 120 stories by Felix Krivin.