A Woman in Workspace

Israeli writer Tehila Hakimi’s Company (2018) is an experimental, fragmentary text—addressed to a nameless “woman in a workspace”—that tries to address, head-on, the corporate work experience, its gendered dimensions, and its operative, emptied-out language. The following is an excerpt.

A WOMAN IN WORKSPACE – are you staring? I see. You are thinking of who? It’s been two months. You’re not moving. At least do some click click click with the mouse, organize your email folders, the folders on your computer, my documents folder, organize everything in subfolders, it would take up half your day, maybe more. At the very least you won’t be just sitting here, dwelling in fictitious thoughts. It is time to take control over the lost task, the one you always leave for the end of the day, the end of the week, the end of the end. The one you avoid reporting about in the weekly meeting, or the monthly meeting, surely in the yearly worker’s assessment meeting, that same task they avoid too, all the managers you’ve had, in every workplace. You chew time until it is pulverized to shreds between your teeth. It’s afternoon, can you hear the beeping? It’s calling them to the shuttle taking them home at the end of the day. Now you remember to start working, in this silence, no one will answer any emails now, the AC is turned off and only the breaths . . .

In the afternoon of the day before the big delegation visit, the small engine died. It shut down the machine and endangered the demo. After hours of check-ups and of running scenarios, the source of the problem was found. A small worn-down pin inside the engine assembly. We managed to find a spare part. The project is still in its experimental stage, and not all the sensors, designed to give real-time warnings and automatically report problems, worked. We disconnected some intentionally in order to circumvent the complication of restarting the system with every run. Some were even designed upside down, temporarily, in order to enhance working speeds.

Three team workers, sixteen hours inside the machine. An infinite number of coffee cups. It is a large, complex system worth $2.5 million. That day before the visit the system was completely down. At some point we took off all the covers and the caps shielding the inner systems in an attempt to identify the source of the problem. The stress increased with sunset. At some point the manager joined us. He came after they updated him on the current status. There was no chance of canceling the demo at that point. His phone didn’t stop ringing between seven and eight in the evening. It was some of the senior managers, they wanted to make sure everything was ready for the demo. I didn’t hear what he told them, he went out of the room when he answered the phone. After two or three calls he said that until we find the source of the problem and solve it, we won’t be able to leave the place. Then he said: I’m staying with you, forget everything, cancel everything you planned for tonight, I’m ordering pizza. The cleaning lady was supposed to come the following morning at seven. I had made sure to schedule her earlier than usual, about two hours before the delegation was supposed to arrive for the demo. A woman of forty, maybe less. In the morning she works as a cleaning lady for us, but not just us, she does rounds in several nearby places. Like other workers, she belongs to some kind of contractor. The same contractor who also provides us with basic supplies, toilet paper, cleaning products, milk and cookies.

A WOMAN IN WORKSPACE, I understand, I understand; I see how everything converges toward one point in time. And time is stretched out on the office desks. See, for example, the desk of the head of marketing, it is covered with gifts he received from potential clients from all over the world. The objects lie there, collecting dust. The cleaning lady has been working here for twenty-five years. She doesn’t clean gifts, she focuses on the windows and the floor. The smell is good. Where at all could one begin? How could one explain to the people now sitting in this meeting room that the meeting, which began at nine, severed the pace of life completely? You hear but you don’t listen, you exist, but you don’t understand. Last night he told you again, for the fifth time, that he can’t, he just can’t, but meanwhile he hasn’t stopped. He didn’t stop calling you and talking to you at every possible moment. He can’t. You tried to explain to him, woman in workspace, that you can’t – you can’t work like that. But he continues like a well-oiled mechanism, the design is top-notch, it works like clockwork, straight to the same spot, and he brings you back in like a whirlpool and you spin into the drain, the drain net is rusty accumulating dirt everything down there is eaten.

How could one explain to the people now sitting in this meeting room that the meeting, which began at nine, severed the pace of life completely?

I remember getting home. But when did I fall asleep? Apparently, it happened immediately. I didn’t have the energy to take a shower. Not even a quick one. I don’t know what happened the moment after I threw myself on the bed. The legs were still in midair. What about the door. I locked the door. I didn’t lock the door. Perhaps I just slammed it. Eventually the door is always locked. The dream returned. I fall from a great height. I always wake up from the dream at the same point. When I hit the bottom of the pit. At this point I usually wake up terrified to discover, a moment later, that there was no fall. My organs are intact, on the bed, I look at the ceiling, lift one leg up, sometimes the two of them, just to make sure. Then I go back to sleep. I fall asleep instantly. I wake up every time another scenario ends, another round, another mechanical failure. The pin of the small engine breaks again and again, like in instant replay. The demo is still threatened. One of the investors laughs loudly and I am almost swallowed up in his mouth, like in cartoons. For a moment he looked like a giant fish. The loop goes on, a recurring loop, the pin is broken and the investor laughs incessantly. Inside the dream I waited for the morning to come so that I could go to work.

A WOMAN IN WORKSPACE,       why won’t you bring some potted plants to your office?

The acupuncturist said that you have a lack. That you are sad in your metals.

At night you dreamed you meet on the street. In the morning you got up, a woman in space, took a shower and lay down on your couch, with the two big windows in front of you open. You lay like this, a woman in space, naked on the towel, outside the windows there were only clouds, skies, and some telescopic cranes. A memory of the sea. The acupuncturist said that you have a lack. That you are sad in your metals. The lack, we should find where is the lack. The sea stood in the chimneys. She moved from one organ to the other, pressing deeply. Where does it hurt, she asked repeatedly, where do you feel a flow, where do you feel warmth, where do you feel change. Where are you? 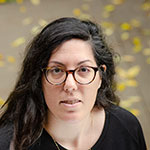 Tehila Hakimi is a poet and fiction writer from Israel. Her books include the poetry volume Mahar Na’avod (We’ll work tomorrow) (2014), which received the 2015 Bernstein Prize for Literature, the graphic novel baMayim (In the water) (2016), and the collection of novellas Hevra (Company) (2018). She is the recipient of the 2018 Levi Eshkol Prize for Hebrew Writers and a Fulbright International Writing Program Fellowship at the University of Iowa. Hakimi holds a degree in mechanical engineering.