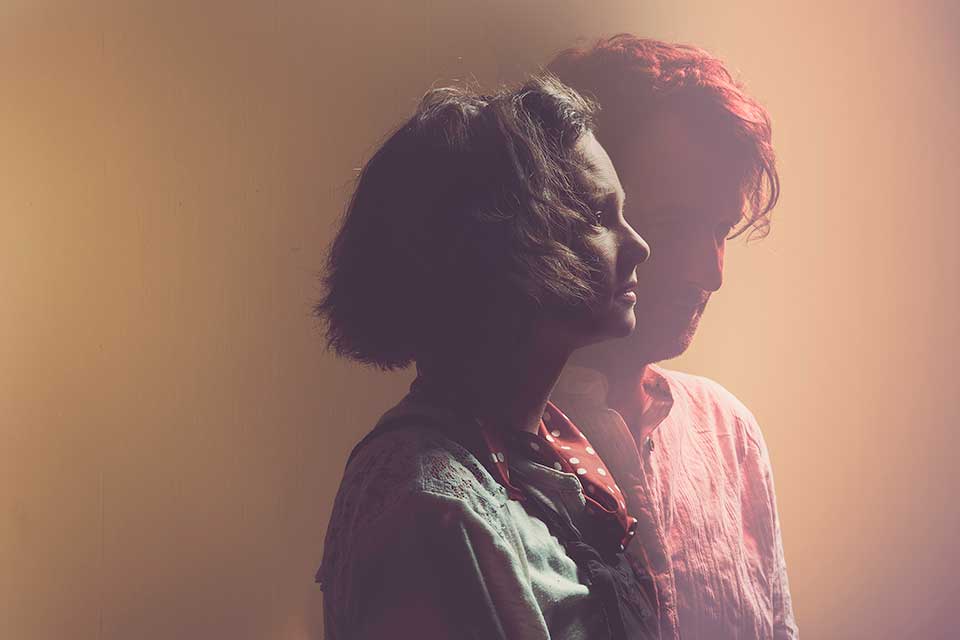 The Bookshop Band is traveling from Wigtown, Scotland, for its first US tour this week. Folk duo Ben Please and Beth Porter write and perform songs inspired by books using a variety of instruments from cello and harmonium to glockenspiel, guitars, and ukuleles. Many authors, including Man Booker winners Yann Martel and Ben Okri, are featured as musicians on the band’s thirteen albums. The band will perform in seventeen bookstores and libraries across the country.

Michelle Johnson: What are your backgrounds, and how did the band come together?

Ben Please: The Bookshop Band first started in 2010 when Nic Bottomley, the owner of our local independent bookshop, Mr B’s Emporium of Reading Delights, in Bath asked if I might put together a group to play songs at their author events. I had recently met Beth Porter at an open-mic night as well as Poppy Pitt (2010–2014) at a musical pub lock-in and had been so inspired by their wonderful songwriting that I asked both if they’d join me for this one-off project spanning a few months of five book events at the bookshop. They all said yes, as we all saw it as a really interesting songwriting challenge. The first season was focused on books from different countries, and the bookshop would theme the night appropriately, have some themed food, themed drinks, and we were the themed music. For that first season it hadn’t really crossed our minds to write a song inspired by the book. Instead, we chose a folk story or two from that country and wrote songs inspired by those to play the author evenings.

Johnson: What was the first book-inspired song you did?

Beth Porter: When we got to the end of the first season of events, the bookshop asked us to come back for the second season (we doubled our price to two glasses of wine each), and the theme of the first event of season two was “Adultery Night,” focused around a fictional biography of Ernest Hemingway and his first wife, called The Paris Wife, by American author Paula McLain; we were a bit stumped. We obviously couldn’t draw from our own experiences, so instead we turned directly to the book for the first time. The process of immersing yourself for a day into the story of another person’s experience means that we came out of that process feeling like we could write something from a perspective that we had never been able to before—it was a really interesting creative process. The songs felt really personal, and indeed you can’t help but have an emotional response to a story but from a new perspective, given to us by the book. It went down so wonderfully in the bookshop to the audience, the bookshop owners, and the author that we haven’t looked back since.

We went to Louis de Bernières’s house to record the song we wrote inspired by The Dust That Falls from Dreams, and he pulled out guitars, mandolins, flutes, and drums to record on the song with us.

Johnson: How have you worked with the authors of books? Can you give an example or two of what that collaboration has looked like?

Please: The books are curated by Mr B’s Emporium of Reading Delights, and we generally meet the author for the first time at the event. A few moments later they will hear the songs we’ve written inspired by their book. There is a collaboration in a sense, of course, between the authors’ work and ourselves, as we’re writing in response to what we have read. Then we come to recording the songs, and this is where there is plenty of opportunity to collaborate with an author, in many different ways. For example, we went to Louis de Bernières’s house to record the song we wrote inspired by The Dust That Falls from Dreams, and he pulled out guitars, mandolins, flutes, and drums to record on the song with us. Similar things have happened with Joanne Harris and Patrick Gale. Ben Okri read a spoken piece as part of our song inspired by The Age of Magic. Dave Shelton, who wrote Thirteen Chairs, is also an illustrator, and he created the cover art for our album That Ghost Belongs to Me. And all the authors who feature on our album When We’re Young sent in photos of themselves as children and babies to line the inside. Collaborations come in all sorts and sizes, but we always try to get the author involved somehow, beyond the inspiration they have given us through their book—mainly because it’s lots of fun.

Porter: We went to Mark Forsyth’s house in London. He is the author of The Horologicon: A Day’s Jaunt through the Lost Words of the English Language. We wanted to record a contribution for the album Accidents and Pretty Girls on which the song inspired by his book appears: “Cackling Farts.” He had professed to not being particularly musical, so we asked him to commentate a version of the song—where he gave the definitions of the unusual words we had used in the song. It turned out, however, he was the proud owner of an old harmonica. It was in the wrong key for the track, but we found one that would work, and he opens the song on this. Just as we were about to leave, he gave us his Johnny Cash–style rendition of “Cackling Farts”—it was uncanny, amazing, and hilarious, and so we sneakily included a bonus-track on the album of him walking into the distance singing this.

Since we began in 2010, we have almost exclusively played in bookshops, libraries, and unusual spaces with some kind of literary theme—it just feels like the right place for us, surrounded by the stories themselves.

Johnson: You’re now headed out for your first US tour, and you’ll be performing in libraries and bookshops, which are generally intimate environments. Is this the type of environment in which you perform in Scotland? Why do you choose this type of venue rather than, say, a bar or theater?

Porter: Since we began in 2010, we have almost exclusively played in bookshops, libraries, and unusual spaces with some kind of literary theme—it just feels like the right place for us, surrounded by the stories themselves, which we can pluck off the shelves, hold up, and describe before we play the song we have written inspired by it. It was natural, then, that when we booked a tour of the US, we should do the same. Bookshops are generally surprised about having music in there—most have never hosted a concert or a gig—and so it can take some persuading to set up the evening. But we think there is such a strong bond and link between the two—different forms of storytelling and certainly not mutually exclusive.

Please: Nic Bottomley will actually be joining us for a literary road trip to Durango, Colorado, to play at the wonderful Maria’s Bookshop, on Sunday, January 20. It’s also Beth’s birthday that day, so we may celebrate later that night, if the ten hours of traveling just to get there from New York doesn’t wipe us out. He’s over for the Winter Institute, the ABA’s annual conference for the independent booksellers of America, which we’re really excited to be performing at too, including an appearance with, and hopefully a new song inspired by, one of Margaret Atwood’s works.

Please: Wigtown has just celebrated its twentieth year as the official book-book-town of Scotland. It followed in the footsteps of Hay and has been a very positive thing. In the late 1980s, Wigtown suffered the closure of two of its main industries—the distillery and the creamery. It did have a few bookshops, and so they vied to become the official book town of Scotland and won. Literary businesses sprung up; binders, publishers, and previously unoccupied buildings opened up as bookshops. Today there are around fifteen bookshops in Wigtown, and it hosts one the largest book festivals in Scotland. It’s a transformed place.

Johnson: What will you play on your US tour these next few weeks?

Please: We have a repertoire of about two hundred book-inspired songs, inspired by over a hundred different books, so there’s a bunch to choose from. We’ve picked some of our favorites, like “How Not to Woo a Woman,” inspired by Rachel Joyce’s book The Unlikely Pilgrimage of Harold Fry, and our song inspired by Alice in Wonderland. But we’ve also picked a couple of American authors with whom we’ve worked, including Armistead Maupin’s Tales of the City series. We’re also looking forward to receiving lots of great new book recommendations from American audiences at our concerts. We'd normally hold up all the books that have inspired the songs before we song them, but we couldn’t carry out all the books in our luggage. Luckily our tour sponsors, Gardners and AMS, who are book and music lovers as well as wholesalers, will be shipping them out to all the bookshops on the tour.

Johnson: What books will you each be reading on the trip?

Please: We’re performing with Margaret Atwood at the American Booksellers Association’s annual conference, and so we’re hoping, if we have time, to write a song inspired by one of her books. We’ll also be taking with us Philip Ardargh’s Eddie Dickens series and a proof of Underland, the new book by Robert Macfarlane.

Johnson: What’s your next big project following the tour?

Please: Just before we left for the States, Beth spent ten days working with a wonderful group of songwriters, including Rachel Newton, Kris Drever, and Karine Polwart to create a performance based around the spells in Jackie Morris and Robert Macfarlane’s book The Lost Words—which brings to life words that have dropped out of the Oxford Children’s Dictionary, like otter, conker, goldfinch. She will be going on tour with them immediately after we get home—no time to rest.

Editorial note: For more on music and lit, including an interview with and playlist by the literary-inspired duo Lusterlit, check out the September 2018 issue of WLT.