Day of the Dead: A One-Act Real Life and Death Play, A Conversation with Playwright Robert Con Davis-Undiano 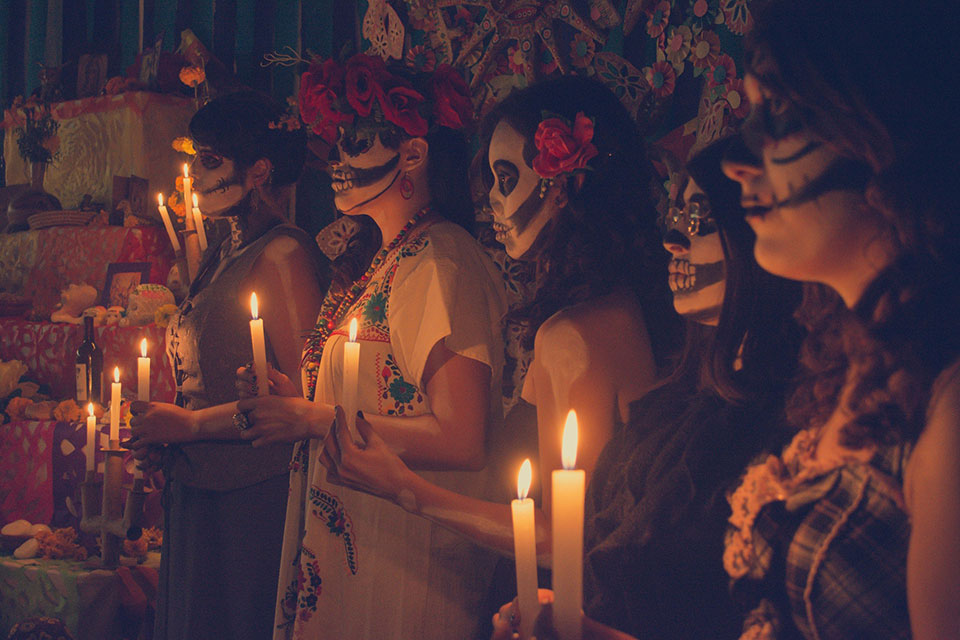 Michelle Johnson: For the uninitiated, perhaps we should begin with your giving a quick overview of the Day of the Dead.

Robert Con Davis-Undiano: There are yearly observances commemorating the dead all over the world. The practice of honoring the dead in the Americas has become famous because of the dramatic and colorful nature of the observance in Mexico and, to some extent, in the US. In the Americas, around December 31, people start creating small altars in their homes and place on them commemorative objects to honor the dead—especially relatives. In public on November 1–2, people visit cemeteries and clean off the grave sites of loved ones. They also stage processions, parades, that wind through towns. In Mexico and a few American cities, people sometimes create scenes (escenas) in public places that show skeletal figures performing mundane tasks like drinking tea or working in a carpentry shop. In every case, the goal is not to repress our memories of and feeling for the dead but to create a balanced state where the memory of the dead is integrated in a healthy way into our daily life.

Johnson: What inspired you to write this play, particularly with a focus on the Day of the Dead as it’s celebrated here in the US?

Davis-Undiano: The Latino Cultural Center in Oklahoma City asked me to write a brief play about this topic, which I did. On October 20, they performed the play in Spanish to a rapt audience of mainly Spanish speakers. Once I had written that version, I saw that expanding it to become a one-act play that could be presented in about forty-five minutes would not be especially difficult. The forty-five-minute version was performed at OU on October 25, and now I’m expanding that version to be a full-length play that is more about the Latino community than it is about Day of the Dead.

Johnson: Can you tell us a little bit about the narrators of each of the three scenes and how they interrelate?

Davis-Undiano: Coatlicue is a complex figure in Latin America, the great mother AND grim reaper. She is a central icon in the Latin American but also the Latino experience. The character Catrina is a skeletal figure who frequently appears in graphic depictions of Day of the Dead observances. She’s dead but is altogether clueless about her state. She’s what the existentialists call a person of bad faith. She doesn’t know much about the reality of her own experience and is an innocent bystander to her own experience.

Elena in the third scene is a contemporary Chicana doctor who is trying to navigate the treacherous water of being a Latina and also just a mindful person in an age of crisis. In effect, all three characters are separate aspects of the same person. In this way, the play is meant to explain something to non-Latinos about the ritual of Day of the Dead but also a little about its substance. The goal of Day of the Dead as a ritual is to support people in having a healthy respect for the dead even as they go about their lives. It is truly a holiday observance meant to enhance mental health in the community. I want to help non-Latinos understand the complex perspective on life and death embodied in these three characters.

Johnson: Norma Lilia Ruiz Cruz, who played each of the narrators in the second production of the play, was captivating. Who is she?

Davis-Undiano: She is from Mexico and is currently a junior at OU. She most often functions in the School of Drama as a dramaturg, someone who has researched a play being produced and can assist the director and actors to understand the play that they are involved in. For her performance in this play, she had to learn a large number of lines and interpret for an audience three complex characters. Only an actress of Norma’s training and ability could do what she did so well in this play. She was outstanding!

Johnson: In the third scene, Elena refers to Rudolfo Anaya’s Bless Me, Ultima. I know that Anaya’s work has meant a lot to you. How does it relate here to this scene?

Davis-Undiano: The play is drawing from a lot of folk material native to the Americas. Anaya’s Bless Me, Ultima is a rich repository of such cultural material. My citing that novel is a way of signaling to the audience what some of that folk material means, and doing so also signals my own close personal and professional ties to Rudolfo Anaya. I am his publisher/editor but also a close family friend. By citing his work, I am giving a shorthand reference to a lot of cultural material but also paying homage to a writer who is a huge influence on my work.

Johnson: What do you most hope viewers will take away after experiencing this live performance?

Davis-Undiano: I would like the play to signal to non-Latinos that the Latino community has a richly nuanced culture and roots in the Americas (including the US) that go far deeper than many in mainstream culture recognize. Latinos are not invaders in the US but in so many ways the culmination of the American idea of a multicultural democracy.

Johnson: You and I have both read Jordan Tannahill’s essay “Why Live? A Question for 21st Century Theater.” Near the end he says, “Whenever I look out over an audience I think: how miraculous it is, all of us gathered together like this. We could literally be anywhere else in the world right now, and we have all chosen to be here.” What are your thoughts on the value of live performance in our so-called digital age?

Davis-Undiano: There are definite ethical implications to live performance. When someone is watching a play or some other entertainment in digital format, it is possible to shape the experience of the work in a variety of ways so that the performance is nonchallenging and has little impact. I am not saying that this denaturing of art through a digital format always happens, but it is always a definite possibility. That is, we can always turn off a movie at moments of great emotional impact and basically encounter any work of art almost entirely on our own terms. With digital storage, the work has to travel across two spaces—from performance to the video camera and from digital storage to own screens or viewing device.

With live performance, where the artwork comes to us in one unified space, a conversation opens up that we cannot control but must in some ways surrender to. In the emotional give-and-take between actors and audience, we discover the limits of our experience and must surrender to what’s happening before us. We are not fully in control. In a word, live performance leads us to rediscover our own humanity by helping center us in our own world, how we fit in the world, and how we want to live. Tannahill is right that we will suffer and become more callous as a culture if live performance disappears. In my own work, I’m trying to take what Tannahill says and discover new modes of understanding that could help revitalize live theater and in some small ways contribute to the culture’s vitality.

Johnson: What’s next with the play?

Davis-Undiano: There is a character by the name of Elena in the one-act play. She is a Latina doctor and a thoughtful person who thinks a lot about the hybrid worlds that she lives in—the Latino community, mainstream America, the medical community, and the many mixed cultures that are not simply one or another of these options. I’m making the new, longer play about her and how she negotiates between being cocooned (relatively safe) in our culture versus putting herself at risk by leaving her safe cocoon to discover more of the world, which presents ethical dilemmas that many of us contemplate but perhaps do not explore very deeply.

Johnson: What traditions do you have for the Day of the Dead?

Davis-Undiano: In my household, we build an altar and go to cemeteries to clean off grave sites of our loved ones.