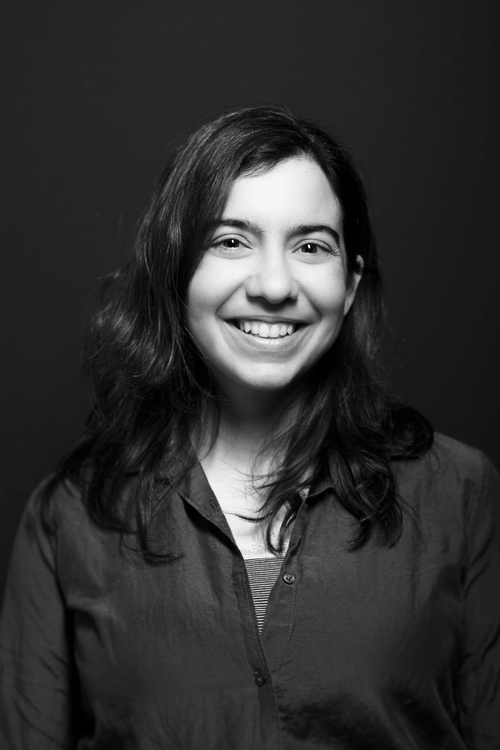 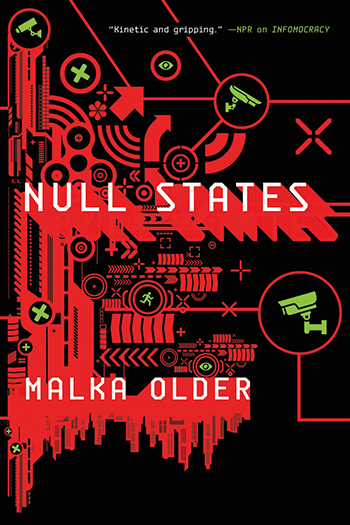 In Null States, the second installment of Malka Older’s three-part book series, Older again typifies the truism that science fiction is a reflection of the here and now. With an undergraduate degree in literature, a master’s in international relations and economic development, a pending PhD in sociology, and expansive participation in disaster relief efforts, Older offers distinctively adept insight into many of the most poignant and visceral issues that are both unfolding and surely about to unfold before our very eyes. In the following interview, Older discusses many of the themes contained in her series: from global worldviews and misinformation to disaster relief and statelessness.

Conrad Young: To begin with the classic question, what authors did you read in your formative years, and how did they impact your writing?

Malka Older: A wide range. Tolkien, Montgomery (L. M.), Borges, Dumas, Brontë (mainly C. but also E.), Nabokov, Stephenson, Hugo, García Márquez, Cortázar, Verne, Carter (A.), Rankin, McCaffrey, McKinley, Adams (R.). With such different writers it’s hard to say how they impacted me except in a general way: the inculcation of narrative beats, for example. Also the understanding that there are many, many, many different ways to write.

Young: You’re a scholar of politics and disaster relief; how much of your research has gone into your writing?

Older: Most of my writing comes from my lived experience—working in disaster relief and development, and mainly living in countries that were not my own and observing how society could be different. I do sometimes give nods to research findings, but mostly I work from observation and impression.

Young: Could you talk about one experience that was particularly developmental in the creation of this series?

Older: I lived in Sri Lanka at a time when the Liberation Tigers of Tamil Eelam held territory in the north and east of the country. I traveled through this territory several times, and once I spent a night in Mullaitivu. The Sri Lankan government couldn’t enter the territory (at the time; they have since reconquered it in a bloody civil war), and there was no grid electricity. The Tigers had established their own bus lines and radio stations, and even decreed that the time zone be different. De facto, it was an entirely different country, unrecognized, tucked into an already tiny island. It made me think about what makes a nation, and why independence or its denial is so important to some people.

Young: In your Centenal Cycle book series, which takes place fifty to sixty years in the future, the current global-political structure of nation-states devolves into a worldwide affiliation of microdemocratic governing bodies, known as centenals, which consist of one hundred thousand people. To what extent is such an administrative system intended to be a template for real-world governance?

Older: I’m less interested in coming up with a perfect system—which I don’t think is possible—than in exploring feasible improvements to the current system. In that vein, microdemocracy is intended to be not perfect but plausible. I’m not trying to point to a single way of making everything better so much as trying to show that there are many possible changes we could make that we often don’t consider.

Young: From that perspective, your writing takes on a notably less Western-centric perspective than other American dystopian literature. What do you hope your readers will take from such a viewpoint?

Older: In part this is a function of my experience; while I grew up in the US, I’ve spent many years working overseas, mostly in the company of other expatriates from a wide range of countries. I wanted to bring this perspective in partly because I felt it was important to show a theoretically global political system from a global perspective. I also found it fun and interesting to explore how this future would play out differently in different places.

Young: Another facet of your series is the global bureaucracy known as “Information,” a Google-like source of knowledge that attempts to impartially enlighten people about politics. With so many elements that are familiar to modern society, where did you draw the line between fact and fiction in writing Infomocracy and Null States?

Older: In the wake of the 2012 (yes, 2012—we had fake news back then too) election and the general move away from fact and evidence consensus in the US, Information was something that I wanted to exist but at the same time realized could be dangerous and problematic. I wrote it in that way to explore the positives and negatives; the line between fact and fiction has been zigzagging over my novel ever since.

Young:  Your first book came out shortly before the 2016 US presidential election and focused on misinformation within the political process. How has large-scale misinformation through the Internet, especially social media, influenced your series?

Older: I read a lot about misinformation (partly because since the book came out people have started to send stuff like that my way). I try to absorb it generally rather than picking specific stories or technologies to focus on in the books. But misinformation was already a central theme of the books, because it was already a trend—from the 2012, 2008, 2004 elections, not to mention political events in other countries—that I felt was one of the biggest threats to governance.

Young: I have little memory of how falsehoods were a part of past elections. How have you seen misinformation evolve and sneak into our lives?

Older: There are a lot of examples, but I think maybe the most clear-cut is the “swift boat” incident in 2004, which was, at the time, so important that it became a verb. The attack was symbolically powerful and became an integral part of the conversation around the election, the sort of thing that partisans would point to in order to end a conversation without any kind of policy discussion. It quite possibly affected the outcome. And then of course it was “discredited” (Wikipedia). The term was also (according to the same Wikipedia article) used by both campaigns in the 2012 election; and yet, by 2016, we had to reinvent it all over again.

Young: You have a prominent social media following and stake clear political and social stances—where do you see your place in social media?

Young: After your first book, you donated part of your proceeds to the Accountability Lab, which focuses on world governance. For this book you’re planning on donating a portion of the profit to the Institute on Statelessness and Inclusion, which focuses on aiding stateless people. Why do those missions, aiding people who are stateless and those who live in dysfunctional states, hit so close to your heart, and how is your concern for those people reflected in Null States?

Older: I decided to set up these donations in part because I feel so fortunate to be able to make money writing, but also because I wanted to find ways to connect readers of my books—which are, after all, fiction, and science fiction to boot—to the real-world, very present issues they discuss. I hope that by pointing readers to the work of the Accountability Lab, which works with young people to find ways of keeping their governments accountable and uses the “Integrity Idol” program to name and fame exemplary civil servants, they will forge a stronger engagement with the ideas in the book and think about how they can use them in their lives. Similarly, with Null States, I want it to be seen as more than just a cool name for a near-future concept but rather what it is: a reflection of the way certain nations and groups are treated today.

Similarly, with Null States, I want it to be seen as more than just a cool name for a near-future concept but rather what it is: a reflection of the way certain nations and groups are treated today.

Young: With the flare-up in ethnic strife in Burma between the Buddhist majority and the Rohingya Muslim minority group, which has led to the expulsion of the latter, your new book seems to be just as timely as the last, though for an unfortunate reason. How do you think Null States relates to the Rohingya, and do you have anything to say about the current genocide occurring?

Older: One of the many problems with nation-states is that they become a way of looking at the world that makes it harder to see people and groups who don’t fall into that category. People who, through no fault of their own, do not belong to any nation-state are unprotected, deprived of their rights, and largely ignored. It has to stop.

Young: In addition to writing, you’re an expert in the field of disaster recovery efforts and are pursuing a PhD focused on the topic. You’ve studied the responses to Hurricane Katrina in 2005 and the Fukushima Tsunami of 2011, among others. You also have hands-on experience in disaster relief in Sri Lanka after the 2004 Indian Ocean tsunami as well as in humanitarian aid responses to various emergencies in places like Darfur, Indonesia, and Uganda, to name a few. How has your work in disaster relief impacted your views on democracy and governance?

Older: Disasters are often a time-compressed, media-intense version of normal governance: the same inequalities, corruption, challenges, legitimate efforts, but faster and more visible. Disasters are also a test for democratic function: When something tragic happens, do we stand together? How do we decide where to invest in rebuilding? On the microlevel, I have seen multiple times how important organization is in the first few days after a disaster: groups of people that work together (often without having any previous connection) do better than people who don’t (this is also borne out by the academic literature on disasters).

Young: With regard to the recent hurricanes in the Americas, the earthquakes in Mexico, and torrential flooding in South Asia and sub-Saharan Africa, could you offer our readers your expert opinion about those recent natural disasters and what recovery might look like?

Older: Recovery takes a lot of time, and a place may look like it’s recovered to an outsider while locals still feel like it will never be the same. On the other hand, recovery is also an opportunity to make things better than they were before—in terms of disaster mitigation but also more generally. Disasters tend to make underlying inequalities visible: poverty, racism, ageism, ableism, environmental degradation, lack of affordable housing—you name it. Looking at who is affected in a disaster and why tells you what the problems were before the disaster hit (which is, by the way, why a lot of disaster experts, academic and professional, don’t like the term “natural disaster”: the hazard is natural, but the disaster occurs only with interaction with human societies). Recovery is an opportunity to take a hard look at what is going wrong and try to improve it.

Young: After the completion of this series, do you plan to continue writing fiction?

Older: Yes, in fact I have a couple of projects with my agent right now!

Conrad Young is an intern at WLT and undergraduate at the University of Oklahoma pursuing a double major in astrophysics and the history of science. Among other interests, he enjoys reading, following politics, gardening, cycling, and brewing beer.