Tell Me about a Complicated Woman: A Conversation with Therese Bohman 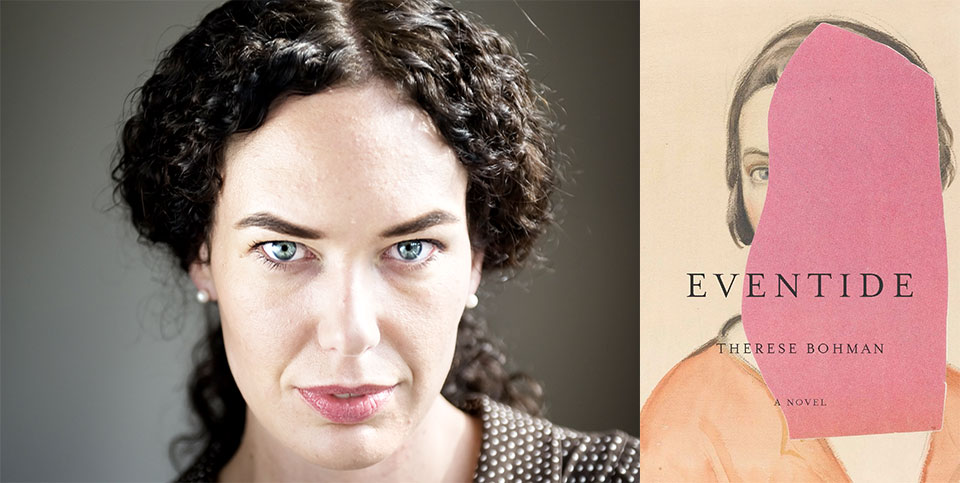 Swedish novelist Therese Bohman is a columnist for Expressen, writing about literature, art, culture, and fashion. The English translation of her debut novel, Drowned, was published by Other Press in 2012, followed by The Other Woman in 2016 and Eventide on April 10, 2018, translated by Marlaine Delargy. Here she discusses art history, writing female characters she’d like to read, and the new Frida Kahlo Barbie doll, among other topics.

Michelle Johnson: Two of your protagonists, Karolina in Eventide and Marina in Drowned, both have art history backgrounds, as do you. What is your favorite period of art history and why?

Therese Bohman: Just like Karolina, I love the late nineteenth century and the turn of the century, for the same reasons that Karolina does. It is such a fascinating period of history with big changes in society and culture: Darwin’s theories on evolution changed the way people thought about themselves and about God, secularization, urbanization, the women’s and labour movements, a little later Freud and his theories about the unconscious. All these things made traces in the art from the period, and they are evident in the way women were depicted.

Johnson: Karolina favors Mannerism, the ending phase of the Italian Renaissance, because she “liked the idea of the origin, flowering and fall of artistic periods; there was something comforting about the cyclical nature of it all. . . . Mannerism was a magnificent and extravagant final effort in an age when there was no longer any point in thinking of restraint or moderation.” (I scheduled Eventide to read this summer, but I cheated and read the first forty-three pages when your clever publicist mailed me an early copy.) Karolina then moves to thinking about late capitalism and the decadence that precedes collapse and then on to how watching or reading the news led her to think that “most ideologies seemed to be in their Mannerist phase.” What comes after Mannerism?

Bohman: Something new! The thought of something new, whatever that might be, is very strong in Eventide, and for Karolina. She is desperate for a change in her life, and for a new era to begin. That is what drives her in almost everything she does, including getting involved with her student.

Johnson: Later this month, you’ll be at the Bay Area Book Festival, appearing on two panels. The first concerns creating complex characters; the second is called “Smart Women Everywhere: Women Calling the Shots in Global Fiction.” Can you give us a preview of what you might say about creating Karolina, whose complex interior world you explore in Eventide?

Bohman: I think that one of the main reasons for my writing is that I almost never can relate to female characters. I am always on the lookout for female writers that I can relate to somehow, and I keep reading reviews of books that sound like they might be what I am looking for, but I end up disappointed most of the time.

So, in creating Karolina I just wanted to write in a way that felt totally honest about a woman that I felt I was missing in literature. I wanted her to be independent but also sensitive—strong and weak at the same time—and not always very nice or sympathetic, not a role model and not a victim. The kind of character I would like to read about myself.

Johnson: Who are your top three or four complex, smart women in global fiction?

Bohman: I often relate more to men, for example Michel Houellebecq’s (probably my favorite author) male protagonists, who are cynical, bitter, even misogynic, but I feel a kind of tenderness for them, and I also feel that I understand them. I am also a big fan of Knausgård, and the narrator of his My Struggle, being intelligent and very sensitive at the same time. A woman I do like is the main character, Anna, from Jill Alexander Essbaum’s Hausfrau (from 2015). I think she is sort of a sister to Karolina and a character I felt I could have written myself.

Today I ordered Outline by Rachel Cusk, which has just been translated into Swedish. I am hoping that she might have written about a woman I might like. I am crossing my fingers. . . .

Johnson: In these early pages of Eventide, Karolina is living alone for the first time in many years. She walks around Stockholm quite a bit and sees it as a cold, inhospitable place. (I’m noticing that your protagonists tend to be walkers.) Is she projecting her inner landscape on the city? In other words, to what extent is Stockholm, or any city, an objective landscape versus what each viewer projects upon it?

Bohman: I think we all carry our personal heaven or hell along with us, and they could be located anywhere. I think the cities in my two latest novels are very much projections of the main characters’ feelings about their existence (so, it isn’t very flattering images I give of the cities . . .).

Johnson: How would you describe Stockholm?

Bohman: I tried to live in Stockholm twice when I was younger but hated it both times. I think it is a rather cold and hostile city when you approach it and don’t know a lot of people (or anyone at all) and don’t have any contacts. It is almost impossible to find a place to live. And I often get a sort of claustrophobic feel—it isn’t a very big city. I have never loved it here, not disliked it either.

Bohman: It was a really big thing here—I read somewhere that the impact of #MeToo was bigger in Sweden than in any other country. It has been a huge thing in the world of literature here, since it included a scandal about a man with close connections to the Swedish Academy (which decides the laureate of the Nobel Prize in Literature). It has also sparked a discussion about the responsibilities of media in cases like this, which I think has been a good thing.

Johnson: One of the prominent culture news items in the US right now is the new line of Barbie dolls celebrating role models, including Frida Kahlo. The Kahlo doll alone is generating considerable controversy—not the first Barbie controversy, of course. As an art historian, what’s your take on it?

Bohman: I actually think the Frida Kahlo Barbie is a good idea, since I think it might make art history easier to approach for all the little girls (or boys) in the world who aren’t exposed to art and culture by their parents. So, her waist is way too thin, and it is perhaps vulgar to sell feminism like this, yes, but it is also a chance to discover a fascinating artist, for children who might not have done that otherwise. I think that is more important.

Johnson: Can you recommend some other writers and fiction for those who enjoy reading books that incorporate art, art history, and contemporary culture?

Bohman: Again, Michel Houellebecq—his The Map and the Territory is very funny and clever and set in the contemporary art world. I appreciated Olivia Laing’s The Lonely City, a sort of lyrical and personal essay on loneliness and art. And I loved Danish writer Christina Hesselholdt’s Companions, with six different main characters discussing authors and artists in a spiritual, witty way. I also have to admit I had a great time with L. S. Hilton’s Maestra and Domina—lots of sex and art, set in the most beautiful places in Europe. It actually reminded me of another of my favorite novels, Patricia Highsmith’s The Talented Mr. Ripley.

Johnson: When you travel to California, what will you take on the plane to listen to and read?

Bohman: I will probably download some of my favorite Swedish podcasts, and—as I often do—bring a way too ambitious book to read. I’ve wanted to read The Odyssey for a long time, and since I heard about the new translation into English by Emily Wilson (apparently it is the first time that a woman has translated The Odyssey), I’ve wanted it even more. I love that it starts with the line “Tell me about a complicated man”—I think that a woman might make Odysseus less of a hero and more of a complex human being, and I really want to find out if that is the case. But since I know myself, I will probably buy a bunch of fashion magazines at the airport and spend most of the time with them.