A Verbal Magritte: A Conversation with Jānis Einfelds 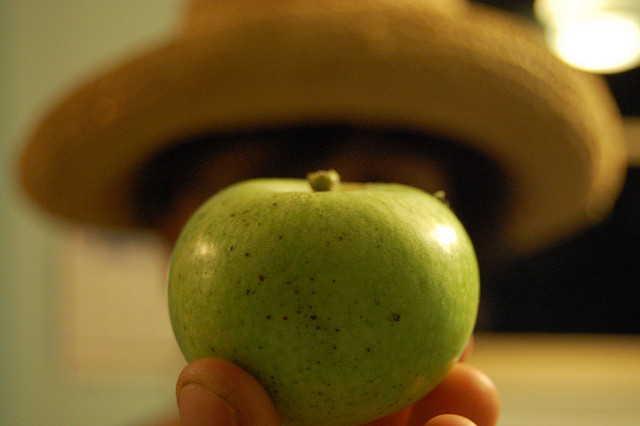 In June I went for my interview with Latvian writer Jānis Einfelds accompanied by Sigma Ankrava, professor in the Department of Literature and Culture, The University of Latvia, who has brought me a tram card and leads the way to Mieru (peace) iela and Meness (moon) iela in Riga. She tells me again on the way that Jānis is in poor health, and I ask, “What illness is it?” “He was in the Soviet Army and someone tried to kill him,” she says. I ask why. “No reason—someone just clubbed him. Part of his brain had to be removed; he gets dreadful headaches, is on medication. He doesn’t drink at all,” she tells me.

Like the painter Magritte, whose painting of a wine bottle is seamlessly transformed into a carrot, Einfelds’s “tales” start out as seemingly whimsical, almost confidential in nature, but suddenly you’ve got radioactive cornflakes, children that an evil stepmother turns into billiard balls, a society of fruit and vegetables in their Golden Age—this last online in the farewell issue of the Salt River Review. The unpredictability of a world of savagery in which someone may try to kill you for no reason comes through in all his work.

Einfelds’s expression of his world started with Meness berns (1995; Moon child), charming short stories, several of which are online in translation by Ilze Mueller. “The Children’s Earth,” for instance, expresses the bewilderment of one trying to make sense of the irrationality around him. Nelaudis (2005; Non-people) is described as prose sketches; I translated several that I considered prose poetry. Indeed, Einfelds’s writing is very poetic.

In Riga, Einfelds’s mother, Maija, tells me Jānis is so excited that I have come. She had emailed that I was “lovingly awaited,” which was really heartwarming. A pianist and composer, she has spread dishes of delicacies atop the long closed surface of the piano, open-faced cucumber sandwiches on rye and cheese salad and rhubarb tart.

Jānis beams at me. He has a round head like the moon and large, grave, blue eyes just as the moon would have. “You are a phenomenal writer,” I tell him, and he looks blank. “You do have that word, don’t you?” I ask, and Sigma assures me that yes, it is a word.

He will not eat with us. “He never eats with visitors,” Maija informs us, serving coffee and pressed rhubarb juice. I show them my Kindle and ask if Jānis would allow me to publish my translation of Meļu dzīres (Eng. The Feast of Liars) as an e-book because it’s so hard to find a publisher for a print book that is translated. He’s willing.

Jānis has two broken-down computers, one a laptop, and sometimes can get online, but when he does, he has to stay in front of the computer in order to remain connected. “He’ll dash into the kitchen for food and then run back,” Maija laughs. “It’s like Mr. Bean!” I exclaim, and he knows what I'm talking about. This is the point at which we venture into the adjacent narrow room, one wall lined with bookshelves, and he shows me his two icons: well-thumbed copies of The Divine Comedy and Mr. Bean. 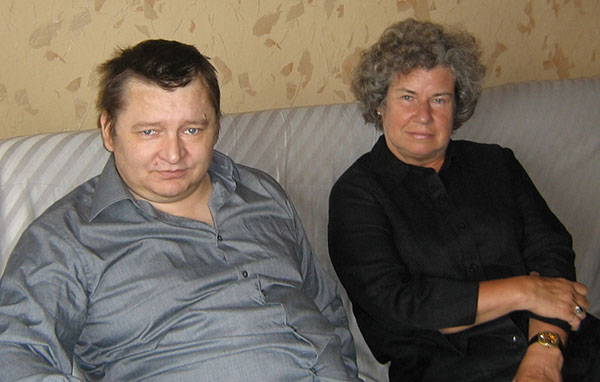 He has three completed novels that are unpublished, the manuscripts stacked on the shelves in folders, revisions also in folders. “Sometimes I get bored and tweak them a little,” he says. One is about pensioners living in a poorhouse: “It starts out like Dickens,” Einfelds says, “but then turns into something like The Terminator.” One is about a boy growing up under Brezhnev, then perestroika. “Is it autobiographical?” I ask. “Well, just a little,” he replies. “At first it’s realistic, but then in part two it’s a crocodile island where there are habits and rules, you know, that I invented. I didn’t know anything about crocodiles, had only seen one in the zoo. But after I’d written the book I saw a National Geographic program on crocodiles, and I’d gotten it right—they really did have those societal customs!”

Jānis is rather a recluse, and Maija tells me that once he didn’t go out of the house for three months in winter. “His shoes slipped so, he was afraid he would fall,” Maija explains. They’ve had a long winter and a long spring. Jānis tells us that Stephen King has a novel in which every eight years there is a “strawberry spring” and a serial killer blooms.

Jānis says he knows so little about me—is it polite to ask where exactly I live? “Chicago, I tell him,” and he asks, “Oh, do you have bridges that rise up for ships to come through?” I assure him that we do and don’t correct him that they rise for sailboats. “I learned that from a James Bond movie,” he says contentedly.

I tell him that we had a great poet, political, Carl Sandburg, and he says “Oh yes, I have read his work” So it’s not like he’s totally marooned.

The love and respect that he and Maija have for each other is so visible. She tells me that for a while they lived in an apartment building full of raucous Russians, partying and drinking constantly. “You can play the piano all night if you want to, we don't mind,” one of them told her. “We learned a lot of Russian swear words—this is very useful to you as a writer, Jānis!” Maija says. “Then later a man said to me, you’re the one who plays the piano? At first you sounded really awful, but now you seem to have gotten the hang of it.” Maija thought to herself, “Well I guess it took me four years. . . .”

Maija tells me that as a composer, she is often passed over when applying to the Culture Capital Fund for a grant, and that funds for writers are given to a triad whose names I won’t give (though you wouldn’t have to twist my arm very hard for me to divulge—I’ve had my own bad experience with the KKF). No book is accepted by a press unless it has financial sponsorship. Sigma says, “The situation with publishing in Latvia is so dismal, we try not to think about it.”

“We have to think about it,” I say, referring to Jānis and myself, and they nod.

Einfelds has had several publishers, including Diena, whose editor Dace Sparane used to push Einfelds’s writing. But when he submitted his last novel, she read it and said, “I can’t use this.” So writing has become a commodity, to make money for the editor and the publishing house, and the grandiose aim of the Latvian Literature Center—to “act as a mediator between Latvian authors, publishers and translators on the one side and publishers and other interested actors abroad and to support the translation of Latvian literature in foreign languages and its publication abroad”—has rusted away with corruption. I was told as a defense that it would be impossible to find competent members of a board or committee to award funds who were not writers themselves or closely related to a writer, and therefore biased, because “Latvia is a small country.” The board that embezzled the money KKF granted to the Latvian Literature Center in 2006 has been disbanded, and now there are only two board members, neither of whom I’d ever heard of before.

Who wouldn’t want to read a novel titled The Street of Great Truth? To continue to describe him in a painterly way, Einfelds has progressed from the still-life sketches of Non-People to rich Breughel-esque tapestries depicting social strata ranging from domestic tranquility to brutal savagery, as in the 2007 novel Palaidnis (The prankster), which I have dived into translating in my usual manner with Einfelds’s work, without reading it through first. I have complete faith that it will surprise and engage me throughout the translation process.

Another thing that bothers me is that the publisher Diena holds the copyright; the author doesn’t. “It’s only for ten years,” Jānis says, and I protest, “It’s just not right.” Literary publishing is not a rational business in Latvia. It took me six months to register the literary agency I started when I was living there, called The Baltic Edge: I was repeatedly told by a clerk with lawyerly coldness that some detail was wrong, and had to figure out on my own how to correct it and bring the entire set of documents back to the counter, where there was a pot of glue, scissors and paper, and a ball of thread. One had to cut a tag of paper, write on it “This document contains x pages,” tie the thread through the papers, and paste the tag of paper over it.

Jānis gives me copies of his books that I don’t have. I’m excited because his work presents well as vignettes, and now I’ll have more to send out to publishers.

I leave Einfelds to his narrow book-lined study, with the small living room that holds Maija’s piano and a black armoire, surely the one described in “Moon Child,” the reality of a small space woven into the fantastic imagination of his work.

Inara Cedrins is an artist, writer and translator. Her anthology of contemporary Latvian poetry written while Latvia was under Soviet occupation was published by the University of Iowa Press, and her new Baltic anthology, three books of poetry from Latvia, Lithuania and Estonia, has been published by the University of New Orleans Press, with her prints as cover art. She guest-edited a section on contemporary Baltic poetry for the November 2008 issue of WLT, and two of her own illustrated poems appeared in the July 2008 issue.