The 2017 BTBA winners, the importance of Vietnamese American literature, and more 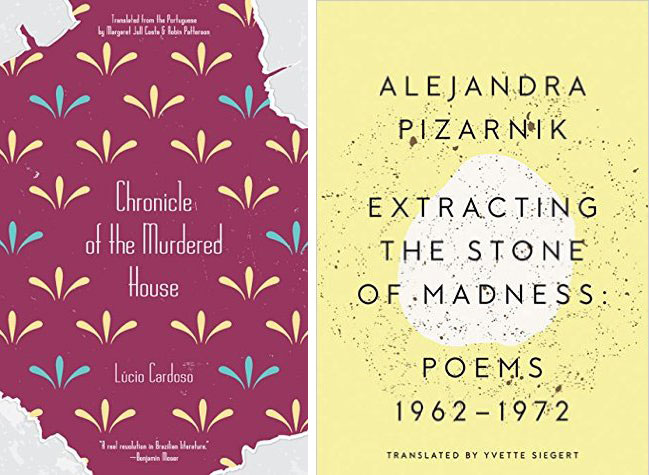 The 2017 Best Translated Book Award winners were announced last night! Lúcio Cardoso’s Chronicle of the Murdered House, translated from the Portuguese by Margaret Jull Costa and Robin Patterson, won the fiction category, and Alejandra Pizarnik’s Extracting the Stone of Madness, translated by Yvette Siegert, won in the poetry category.

The PEN World Voices Festival is currently taking place in New York City. In this Literary Hub article, authors from this year’s festival including Maaza Mengiste, Jill Filipovic, and Carrie Brownstein reflect on the relationship between gender and power in the age of Trump.

What’s in the latest issue of WLT? More than two dozen Native American writers in a special section guest-edited by Jeanetta Calhoun Mish, current Poet Laureate of Oklahoma, with a cover that features a jaw-dropping Standing Rock photo by Tlingit photographer Zoë Marieh Urness. The print edition arrives in bookstores and subscriber mailboxes next week, while the digital edition goes live on Wednesday, May 10.

Recent NSK prize finalist Jacqueline Woodson will be honored along with Jeanette Winterson at the LAMBDA Literary Awards.

In this NPR interview, Palestinian American author Hala Alyan discusses her novel Salt Houses, the importance of objects, and her own family’s story.

Via Words Without Borders, this short, food-centric fiction by Ananda Devi is a “journey into the shadows of flavor.”

German illustrator and author Wolf Erlbruch will come to Sweden at the end of May to receive the 2017 Astrid Lindgren Memorial Award.

Three Percent has launched a new podcast titled Two Month Review, which will focus on a single book for an 8­­–9 week period.

NSK prizewinner Katherine Paterson has authored her first middle-grade novel in more than five years. The work of historical fiction is titled My Brigadista Year.

Colson Whitehead has been shortlisted for the Arthur C Clarke award for science fiction with his novel The Underground Railroad.

In this New York Times essay, Viet Thanh Nguyen explains the importance of Vietnamese American literature and its role in defining Vietnam as a country, and not a war.

Alain Mabanckou is out of the running for the 2017 Man Booker Prize, but The Herald discusses his work and highlights the need for more African writers to penetrate the anglophone world.

Love aphorisms? Check out this Unbound campaign for Yahia Lababidi’s newest collection, Where Epics Fail. Lababidi is also guest-editing a special section on “Belief in an Age of Intolerance” for the forthcoming November issue of WLT.

Argentinian artist Marta Minujín is constructing a large art installation with 100,000 copies of banned books. Titled The Parthenon of Books, people can view the full list of books online and submit their own text suggestions.

This month marks the 50-year anniversary of Gabriel García Márquez’s One Hundred Years of Solitude, and the Guardian is inviting people to read the book and offer their own ideas for decoding it.