If writers billed by the hour, a new interview with Etgar Keret, and more 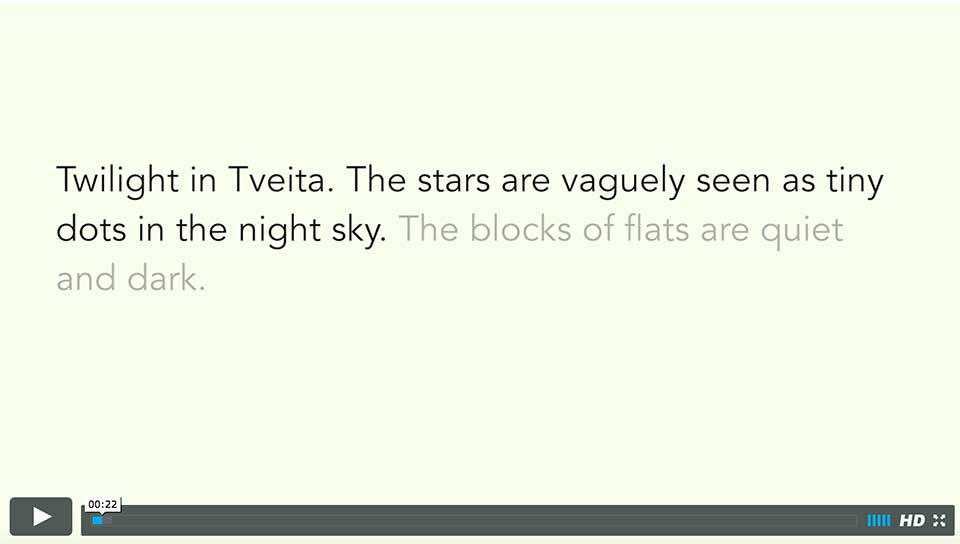 Radio Atlas use subtitles to translate various forms of audio.

Radio Atlas is a new project that aims to translate sound art without destroying the poetry of its delivery. In this Asymptote interview, Eleanor McDowall explains more about her project.

Etgar Keret discusses his new book, storytelling, politics, and the borders of language in this interview with Words Without Borders.

“For my father, a whole generation of sons and daughters whose parents witnessed and survived the Jewish Holocaust, Wiesel’s passing was like a death in the family.” Read Rosebud Ben-Oni’s tribute to Elie Wiesel on the Kenyon Review website.

Sarah Ruhl’s play Dear Elizabeth draws from the 30-year-correspondence between Neustadt laureate Elizabeth Bishop and Robert Lowell. The play is currently running at the Dorset Theatre in Vermont through July 24.

Recent Neustadt Prize juror Andrew Lam writes for the Huffington Post about the state of justice and peace for ethnic minorities in America.

The German Association of Literary Translators published the results of its most recent compensation survey. It found that literary translation pay often violates minimum rates, the majority of translators are women, and more.

Pulitzer Prize-winners are among more than 150 writers urging Israel to release Palestinian poet Dareen Tatour, who was placed under house arrest for a poem she wrote.

Via McSweeney’s, have a laugh with this piece that breaks down what a week would look like if writers and poets billed by the hour.

In this Huffington Post list, Neustadt Prize laureate Gabriel García Márquez makes the cut as one of the 19 reasons Colombians are so in love with their country.

Good news, bookworms and gamers! Psychologists say that reading books and playing video games can make you a better person.