A Letter from Maya Angelou, Translation Lit Prizes, and More 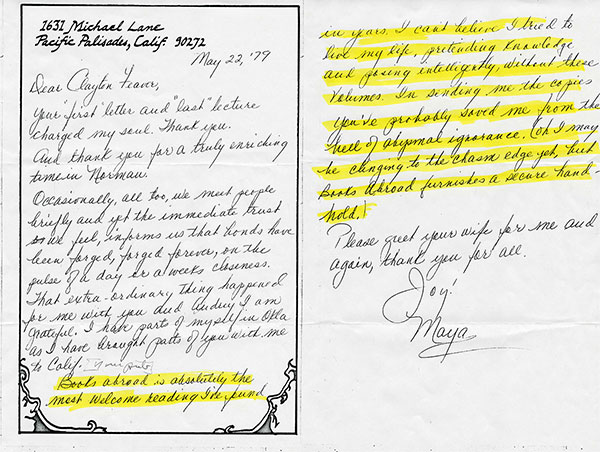 Some controversy surrounded the publication announcement of Harper Lee’s new work, Go Set A Watchman, and some wondered if she was manipulated into signing a contract. The state of Alabama has found Lee mentally sound and Reuters reported that Lee has made it quite clear she wants the book to be published.

This week Mashable featured a short piece about the underrepresentation of female writers and reviewers in the literary world. According to research by VIDA, an organization dedicated to reporting gender equality issues in the literary field, the breakdown isn’t promising. VIDA publishes a report analyzing gender disparity at major literary publications each year.

This week, Three Percent released the longlists for the 2015 Best Translated Book Awards for Poetry and Fiction. In the lists, you’ll discover many familiar titles that have been recently reviewed in WLT.

The United States Postal Service honored Maya Angelou with a Forever Stamp on Tuesday in Washington DC, and we’re delighted to share some images of the stamp as well as a handwritten letter Angelou wrote to World Literature Today in 1979.

In 1679 Pope Innocent XI ordered a book written by a Spanish Jesuit to be destroyed, and it looks like one survived. A copy of Varia Opuscula Theologica (Various Theological Brochures) by Doctoris Francisco Suarez turned up in a British bookstore.

This Seattle-based artist takes discarded books found in dumpsters and brings them back to life with glorious 3D cut illustrations of fairy tales. It takes Isobelle Ouzman about 2-3 months to complete each whimsical piece, and she uses an X-Acto knife, glue, watercolors, and Micron pens to create layers of breathtaking scenes.

Shortlist recently featured a list of 30 quotes about death from famous writers. From George Eliot to Aravind Adiga to Haruki Murakami, each author has a slightly different perspective.