Remembering Maya Angelou, the World Cup of Books, and more 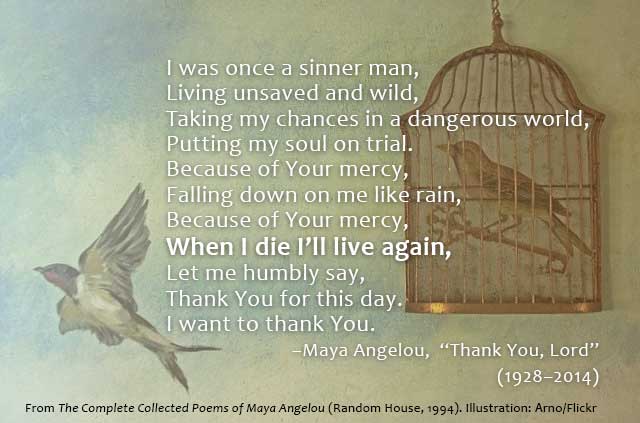 This week, the world said good-bye to Maya Angelou, beloved author and poet. You can read a tribute to her, which includes photos of her visit to Oklahoma for the 1986 Neustadt Festival, at the WLT blog.

Several new Native American reads are available in the 2014 American Indian Catalog by the University of Oklahoma Press.

In the first time in the prize’s history, the Independent Foreign Fiction Prize was awarded to an Arab author, Hassan Blasim, for his novel The Iraqi Christ.

The act of translation can sometimes drive a translator a little insane. While trying to balance original meaning with new language, an author’s voice with new words, Maria Jastrzębska wonders if a translator can truly stay sane while working.

In a bold effort to make British literature classes more British, several American classics have been cut from the British education curriculum.

This week marked the publication date for the highly anticipated third part (in English translation) of Karl Ove Knausgaard’s six-part series, My Struggle.

With the World Cup just around the corner, Three Percent is asking for your help in nominating books for the first-ever World Cup of Books. Countries represented include those participating in the 2014 FIFA World Cup, and chosen books will go head-to-head in a bracket battle to determine the winner.

The WLT staff cordially invites all of our readers to join us in Oklahoma City on June 12 for a night of art and culture with photographer Simon Hurst. His author portraits, including photos of Maaza Mengiste, Sherman Alexie, and Andrés Neuman, have graced the covers and pages of WLT magazine for nearly a decade. As a bonus, Kerri Shadid will write poems for people at her poetry stand.

Looking to move? You can live in Ray Bradbury’s house, which recently went on the market—for a mere $1.5 million.

Beloved young-adult author John Green talks about several of the background stories to favorite children’s books from around the world.

Substituting a typewriter for a paintbrush, Qwerty artist Pablo Gambao Santos has created a 200-foot-long illustration made completely of individual letters.

What’s in a pen name? For the New Yorker’s John Wray, it provides a doorway to writerly freedom.