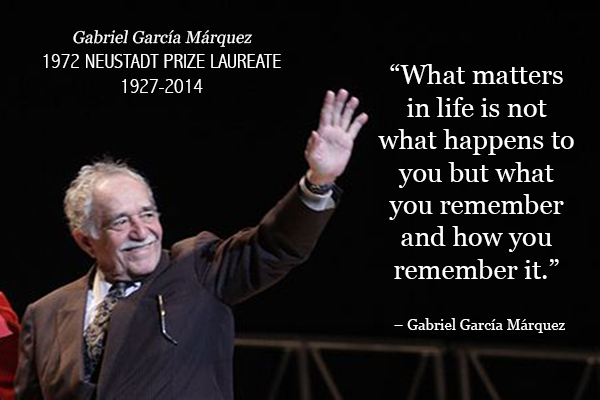 This week was full of celebrations, once again. Though we said goodbye to Gabriel García Márquez, literary readers, writers, and publishers around the globe celebrated his exceptional life. We also celebrated poetry with Poem in Your Pocket Day, Shakespeare’s birthday, and Earth Day this week.

Last week, the world said goodbye to a true literary great: Gabriel García Márquez passed away in Mexico City at the age of 87. Several tributes have since been published, including on the WLT blog and at English PEN.

Kosal Khiev was born in Cambodia, fled the Khmer Rouge for the U.S., and then found himself in prison and deported back in Cambodia. Poetry, he says, was his saving grace, leading him to a better life and a better understanding of his Cambodian culture.

In a comical piece for the Poetry Foundation, Durs Grünbein provides unpopular answers to the most popular poetry questions, like “how long have you been writing?” and “Can you really make a living writing poetry?”

Win Tin, Myanmar’s longest-serving political prisoner, passed away this week. His legacy as an antijunta journalist and activist will not be forgotten.

During the 1920s and 30s, Stefan Zweig was the most widely read and translated writer in the world. However, he is no longer a household name in the U.S., even though this Mantle interview shows he still matters today.

This year’s London Book Fair turned once again to the question of women in translation with the session aptly titled “Where are the Women in Translation?”

Where does Pulitzer Prize-winning poet Vijay Seshadri find his inspiration? NPR talked with him over email after the Pulitzer announcement to discuss how he felt about the prize, the poets he admires, and his writing process.

This week, the world celebrated William Shakespeare’s 405th birthday with Talk Like Shakespeare Day. Here’s a list of 20 words commonly used that we can thank the Bard for inventing.

Citing that China is the “poem kingdom,” China Whisper listed its picks for the top 10 most influential Chinese poems. We wonder if our readers might add more.

When is it time for a library to begin building up an Arabic literature collection? In an interview at the Arabic Literature (in English) blog, librarian Isabella Rowan answers this question and more.