Woeser under house arrest, the Best European Fiction 2016, and more 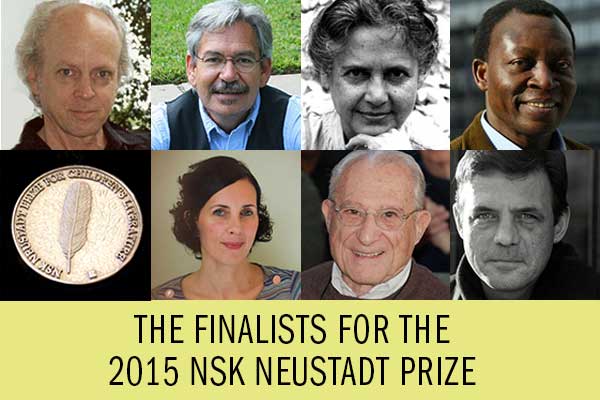 The seven finalists for the 2015 NSK Neustadt Prize for Children’s Literature have been announced! The winning author will be named at the 2014 Neustadt Festival in Norman, Oklahoma.

New reports from the author herself reveal that Tibetan political dissident Woeser and her husband, Wang Lixiong, have been placed under house arrest in their home in Beijing. (For more information on Woeser and Tibetan literature in general, see this December 2012 blog post.)

One of the toughest decisions a bookseller has to make in day-to-day life is which books to shelve and how. In this recent piece for the Atlantic, Susan Coll describes the thought process that goes into such a decision and how booksellers can’t “save” every book by featuring it prominently.

With self-censorship in Mexico on the rise, comedian and writer Luis Perez Garcia posits for the Mantle that Mexico needs more humor, and quickly. (For more on humor in Mexican literature, see this March 2014 essay by Raquel Castro: “Raquel Castro Asks Herself, ‘Is It True There Is No Humor in Mexican Literature?’.”)

The 2014 English PEN Awards were announced earlier this month, honoring writers, translators, and publishers from around the world for inspiring and innovative literature in translation.

The Poetry Translation Centre in London is celebrating its 10th anniversary with the publication of a new anthology, which you can now purchase.

Mo Yan’s most recent novel, translated by Howard Goldblatt and published by our friends at the University of Oklahoma Press, was recently announced as a 2013 IndieFab Fiction winner!

The Dalkey Archive is looking for submissions to its Best European Fiction 2016 collection. Submissions are due by August 15, and winning entries will be published in the annual anthology.

What are your plans for October 16? If you’re in New York, we hope you’ll clear your schedule for what we anticipate to be a fantastic 10th anniversary gala with Archipelago Books.

Applications for the PEN Emerging Voices Fellowship are now open. This grant is awarded annually to new and emerging writers who lack proper access to launch their writing careers.

If you are in the NYC area or are willing to ship books there, a bilingual Spanish-language bookstore in Brooklyn is asking for donations of new and gently-used Spanish language children’s books. Any donated books will be provided to the many children who recently crossed the U.S.-Mexico border.

Speaking of the World Cup, the Guardian recently asked its readers to imagine their ideal literary football teams, placing famous authors both ancient and modern as goalies, midfielders, and other positions on the pitch.

Love fantasy books but tired of reading about the same Medieval setting? From Book Riot, here are four international fantasy books that traverse the world in both story and scope.

If you’ve ever wondered if it’s possible to learn a new language in your sleep, a recent study confirms that it is, indeed, possible.

This one’s for the poetry lovers! Masters in English has published a comprehensive list of the 100 best websites for poetry enthusiasts.

World Literature Today, the University of Oklahoma’s award-winning magazine of international literature and culture, will host the 2021...
October 12, 2021 | WLT