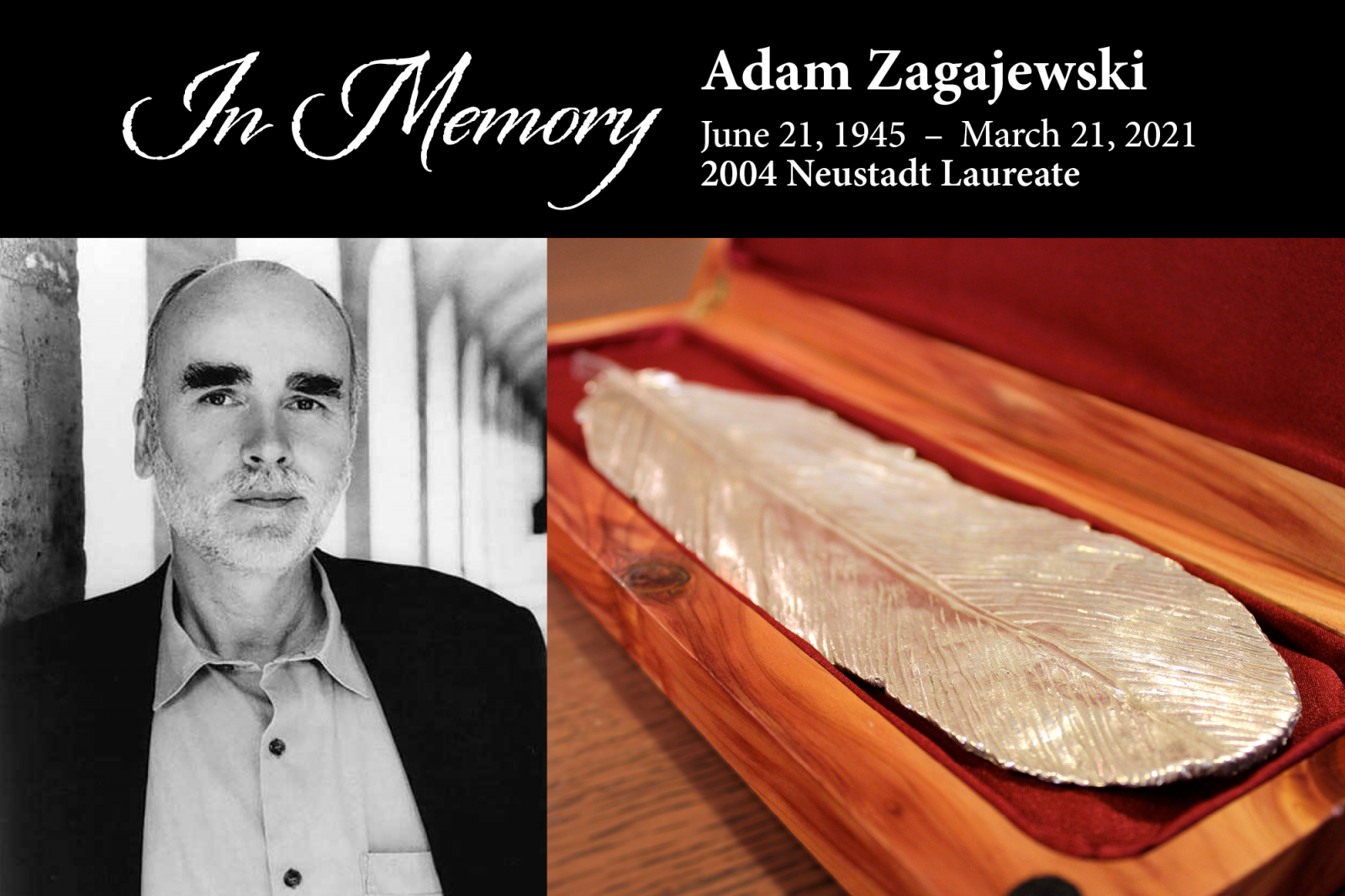 When we heard the news yesterday that Adam Zagajewski had passed away at the age of seventy-five in Kraków, Poland, we immediately thought not only of his exceptional poetry and essays but also of his exceedingly warm congeniality. Zagajewski and his wife, Maya, graced us with their presence at the University of Oklahoma in October 2004, on the occasion of his receiving that year’s Neustadt International Prize for Literature, a year that also saw Chinua Achebe, J. M. Coetzee, José Saramago, and Mario Vargas Llosa nominated for the award. The following acceptance speech, which he delivered at the banquet in his honor, was printed in the May 2005 issue of WLT along with an encomium by Bogdana Carpenter, the juror who nominated Zagajewski for the prize, plus tributes by Clare Cavanagh, Meena Alexander, Magdalena Kay, and others. Zagajewski’s speech and Carpenter’s tribute also appear in the Neustadt anthology Dispatches from the Republic of Letters (Phoneme/Deep Vellum, 2020). On behalf of my colleagues at WLT, we extend our deep sympathies to Maya and to all those close to Professor Zagajewski. – Daniel Simon

Awarding the prestigious Neustadt International Prize for Literature to Adam Zagajewski, the most gifted poetic heir of Miłosz, is like passing on a baton, providing reassurance that Polish poetry is alive and doing well. – Bogdana Carpenter

Let me express my gratitude for this prize, the Neustadt International Prize for Literature, which I’ve known about since 1978, when Czesław Miłosz received it. I remember regarding with awe his Neustadt photograph representing a handsome poet in a tuxedo, smiling and proud. Miłosz was in the 1970s a poet for the happy few, a secret and—within the Soviet-dominated part of Europe—prohibited poet whom we in Kraków read avidly, the way one studies a sacred text. We read his work in informal seminars, in private apartments, for he was banned from the university then.

Norman, Oklahoma, may not be Paris, and yet you display here a generosity that is mostly lacking in the old, traditional centers. It seems also—I’ve learned all this after the news about the prize reached me in Kraków—that you’ve invented an ingenious and completely transparent system for your international jury’s debate and vote.

Thank you for this beautiful prize; when I look at the list of its winners I can’t believe my eyes. I find on this list the great names of contemporary literature, starting with Giuseppe Ungaretti. Then comes Gabriel García Márquez, Elizabeth Bishop, Octavio Paz, and many others. Could you imagine a room filled with all these giants? The roar of laughter, friendly exchanges, but also brilliant, malicious remarks? Norman, Oklahoma, has established itself as one of the undeclared capitals of modernity.

Norman, Oklahoma, has established itself as one of the undeclared capitals of modernity. – Adam Zagajewski

I want to thank the Neustadt family for their kindness and for their interest in the art of writing, and World Literature Today for its zeal and tenacity in covering so many different linguistic realms of fiction and poetry. My gratitude goes also to Bogdana Carpenter who, unbeknownst to me, championed my work in front of the other jurors. Given the time difference between Oklahoma and Poland, I can easily claim that she fought for me as I was sleeping in Kraków under the gray October sky. Thank you, Clare Cavanagh, the magic translator of my poems and essays. And, last but not least, thank you, Maya—for everything.

Standing here in front of you, I’m thinking of Joseph Brodsky, who came to Norman to present and praise Miłosz’s work for the Neustadt. I’m also thinking of my great compatriot, my mentor and friend, Zbigniew Herbert, whose name appeared several times during the Neustadt Prize deliberations and who, almost always unlucky in the external circumstances of his existence, was never chosen the winner of the prize—of course, he would have deserved this award in such an obvious way that even saying this seems to me futile.

I look at you, dear audience; I see many juvenile faces, and I realize that some young, very young poets, poet-candidates, so far unknown to the world and yet great in their daydreams and potential promises, have gathered in this room. This makes me think of poetry itself, poetry that is greater than any of us can comprehend.

Here we are, in this beautiful modern hall within the Sam Noble Oklahoma Museum of Natural History; we find ourselves in the company of dinosaurs and other dignified beasts, illiterate yet intriguing, once dangerous, now posthumously domesticated. And yet there’s a different, silent, and invisible company that doesn’t need any special building to be permanently present in our lives (well, a good library is a useful thing)—the dead poets’ society: Homer and Sappho, Virgil and Keats, Emily Dickinson and Adam Mickiewicz, Antonio Machado and Anna Swir. The fact that we, the living ones, still write poems verges on impudence. After all these masterpieces! After all this perfection! After all these dramatic events, after Shelley’s drowning death, after Keats’s agony in Rome, after Goethe’s long and laborious life, after Mickiewicz’s expedition to Turkey, after Georg Trakl’s anguish in a military hospital in Kraków! Can we match the legendary realm, can we fancy ourselves poets in a way comparable to theirs?

We respond to this question through our deeds, through the action of writing. We know that to answer it directly would be impertinent, not necessary, but we also recognize that imagination has to struggle with the dragon of time afresh each day. Time brings about new things, good and bad; we must ascertain them. Time kills people and civilizations; we must save them, to remember them in poetry. We understand that the ongoing war between imagination and time (alas, a war that will never be won) cannot end, that we cannot turn, all of us, into historians of poetry and content ourselves with reading old poets. Poetry must be written, continued, risked, tried, revised, erased, and tried again as long as we breathe and love, doubt and believe. We always remember, of course, that we write our poems in the gigantic shadow of the dead and that we should be humble, at least in those long hours when we do not compose. (Being too humble in the very moment of creation would not be very wise.)

Poetry must be written, continued, risked, tried, revised, erased, and tried again as long as we breathe and love, doubt and believe. – Adam Zagajewski

We need to go on, paying the price, sometimes, of being not only imperfect but even, who knows, arrogant and ridiculous.

An award like yours, the Neustadt Prize, with its silver feather lost by a silver eagle somewhere in the silver imaginary mountains, helps a lot. It helps to forget, if only for a brief moment of a ceremony like this one, the immense risk involved in writing poetry today. Poetry, according to Friedrich Hölderlin, this bard of loneliness, is the most innocent of all occupations. That is very true, and yet innocence is perhaps the most daring thing in the entire world.

Adam Zagajewski (b. 1945) was born in the city of Lwów (now Lvov, Ukraine) but was forced to leave almost immediately thereafter when the Red Army occupied the area. After studying philosophy at Jagiellonian University in Kraków, Zagajewski emigrated to Paris, where he would remain until 2002. He began writing poetry in the 1970s and helped lead the movement that would come to be known as the Polish New Wave. He built his career around teaching at various universities throughout the world, including the University of Houston and the University of Chicago in the United States. Much of Zagajewski’s body of work has been translated into English, including the poetry collections Tremor (1985), Canvas (1991), Mysticism for Beginners (1997), World Without End: New and Selected Poems (2002), A Defense of Ardor (2004), Eternal Enemies (2008), Unseen Hand (2011), Slight Exaggeration (2017), and Asymmetry (2018). He also wrote a memoir, published in 2000, entitled Another Beauty. In addition to his Neustadt honor, Zagajewski was also named a Guggenheim Fellow in 1992.