As the United States Postal Service hosts a stamp dedication event tomorrow in Washington, DC, for the release of their Maya Angelou Forever stamp, we’re delighted to share images of the new stamp as well as this handwritten letter that Angelou sent to World Literature Today in 1979, which was known as Books Abroad until 1976.

Angelou had been a visiting scholar at the University of Oklahoma, and her host, Rev. Dr. J. Clayton Feaver—a legendary philosophy professor at OU who contributed reviews of books on religion to the magazine during the late 1950s—sent her home with several issues of the publication.

In it, Angelou remarks, “Books Abroad is absolutely the most welcome reading I’ve found in years. I can’t believe I tried to live my life, pretending knowledge and posing intelligently, without these volumes.”

Angelou returned to the University of Oklahoma in 1986 to serve as a Neustadt Prize juror—she nominated Nigerian dramatist, poet, novelist, and critic Wole Soyinka, who went on to win the Nobel Prize in Literature later that year. Current WLT executive director, Robert Con Davis-Undiano, served as Angelou’s campus host during her visit.

The stamp showcases Atlanta-based artist Ross Rossin’s 2013 4ft. by 4ft. oil-on-canvas portrait of Angelou. The painting is part of the Smithsonian National Portrait Gallery's collection, where it will be on display through November 1. The stamp features this quotation by Joan Walsh Anglund: “A bird doesn't sing because it has an answer, it sings because it has a song.”

The stamp pane includes a short excerpt from Angelou’s book Letter to My Daughter. It reads: “Try to be a rainbow in someone’s cloud.” Art director Ethel Kessler of Bethesda, MD, designed the stamp.

For more on Angelou’s connection with WLT and the Neustadt Prize, you can read this tribute published for her in May 2014. 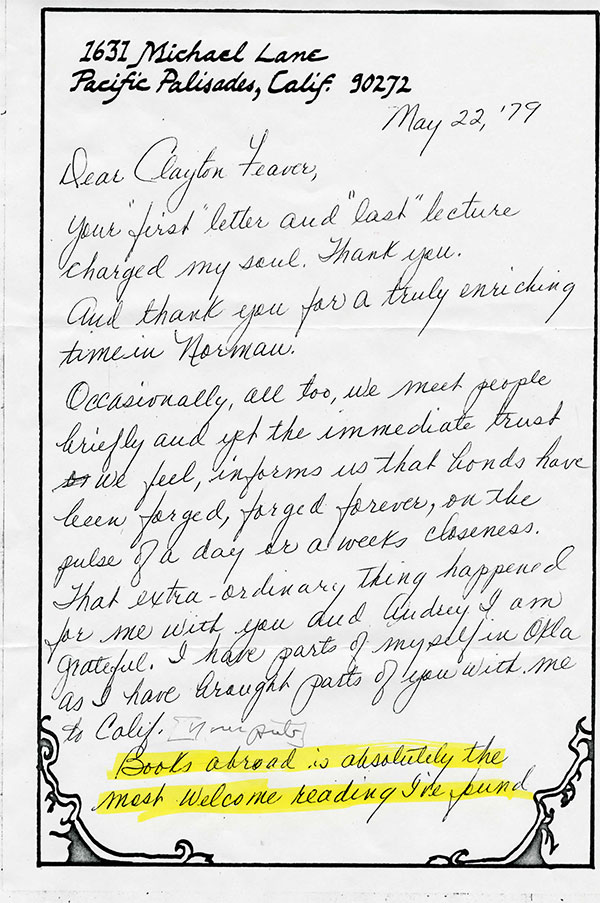 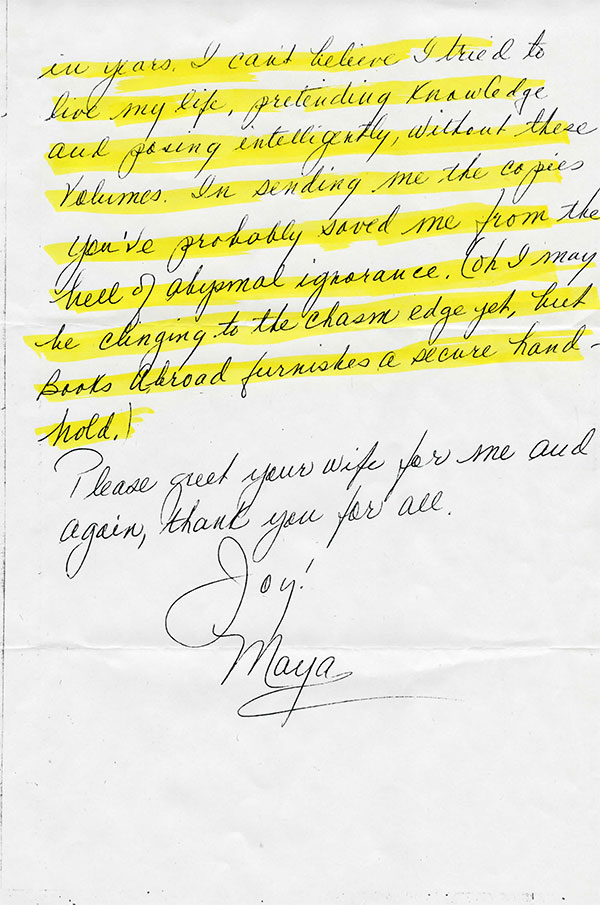 Your “first” letter and “last” lecture charged my soul. Thank you. And thank you for a truly enriching time in Norman.

Occasionally, all too, we meet people briefly and yet the immediate trust we feel, informs us that bonds have been forged, forged forever, on the pulse of a day or a week’s closeness.

That extra-ordinary thing happened for me with you and Audrey. I am grateful. I have parts of myself in Okla. as I have brought parts of you with me to Calif.

Books Abroad is absolutely the most welcome reading I’ve found in years. I can’t believe I tried to live my life, pretending knowledge and posing intelligently, without these volumes. In sending me the copies you’ve probably saved me from the hell of abysmal ignorance. (Oh I may be clinging to the chasm edge yet, but Books Abroad furnishes a secure handhold.)

Please greet your wife for me and again, thank you for all.