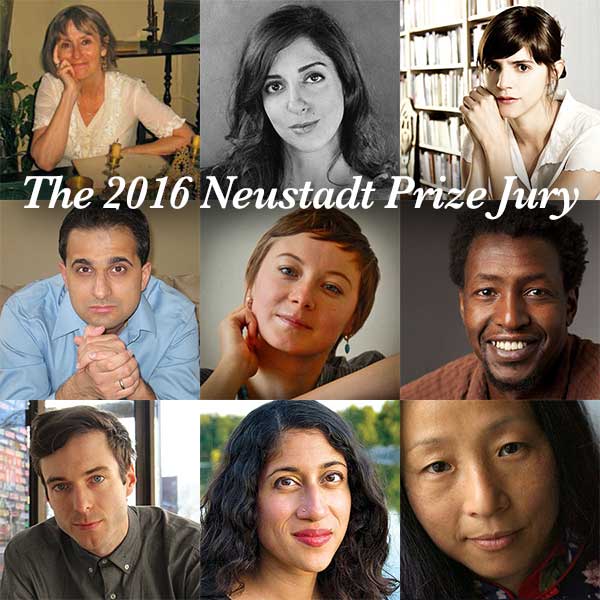 Read more about each author on the Neustadt Prize website, or see the full press release here.

The biennial Neustadt Prize recognizes great accomplishments in literature and is frequently known as “America’s Nobel” for its reputation as a forerunner to the Swedish Academy’s annual selections.

Highly respected within the literary community for its recognition of excellence, the Neustadt Prize may be awarded to a living writer anywhere in the world, regardless of the medium in which they choose to write. The international jury is composed of highly esteemed authors, and their sole consideration is to select finalists based on the literary merit of their works. This is done so that the prize remains unaffected by special interests, such as book sales or a publisher’s influence.

The jury’s shortlist of finalists will be announced May 27 at a special event hosted at the Lighthouse Writers Workshop in Denver. That evening, the Lighthouse will host a launch party for the May issue of World Literature Today magazine, which features translations of 15 contemporary Hebrew-language writers. Honored guests include Israeli author Daniel Oz and Kathy Neustadt, representing the Neustadt family, who will announce the 2016 Neustadt Prize finalists.

The jury panel will convene Oct. 21 to 23, 2015, during the annual Neustadt Festival to select a prizewinner. The Neustadt Festival, hosted at the University of Oklahoma in Norman each fall, is a three-day event featuring music, art and drama representing the keynote author’s home region as well as roundtable panels examining literary trends and discussing the author’s influence on his/her given genre. The prizewinner is announced at the festival’s closing banquet. Neustadt winners receive $50,000, a silver feather and a certificate of recognition.

The Neustadt Prize was first given in 1970 to Italian poet Giuseppe Ungaretti. Notable winners have included Nobel Prize in Literature recipients Gabriel García Márquez (1972), Czesław Miłosz (1978), Octavio Paz (1982) and Tomas Tranströmer (1990), as well as many well-known novelists, poets and playwrights. Last year’s Neustadt winner was Mia Couto of Mozambique, who was recently shortlisted for the highly regarded Man Booker Prize.

The Neustadt Prize is given in alternating years with the NSK Neustadt Prize for Children’s Literature. The 2015 NSK Prize winner is author-illustrator Meshack Asare of Ghana, one of Africa’s most influential children’s writers. Asare will be recognized at the 2015 Neustadt Festival in October. NSK winners receive $25,000, a silver medallion, a certificate of recognition, and a festival hosted in their honor.