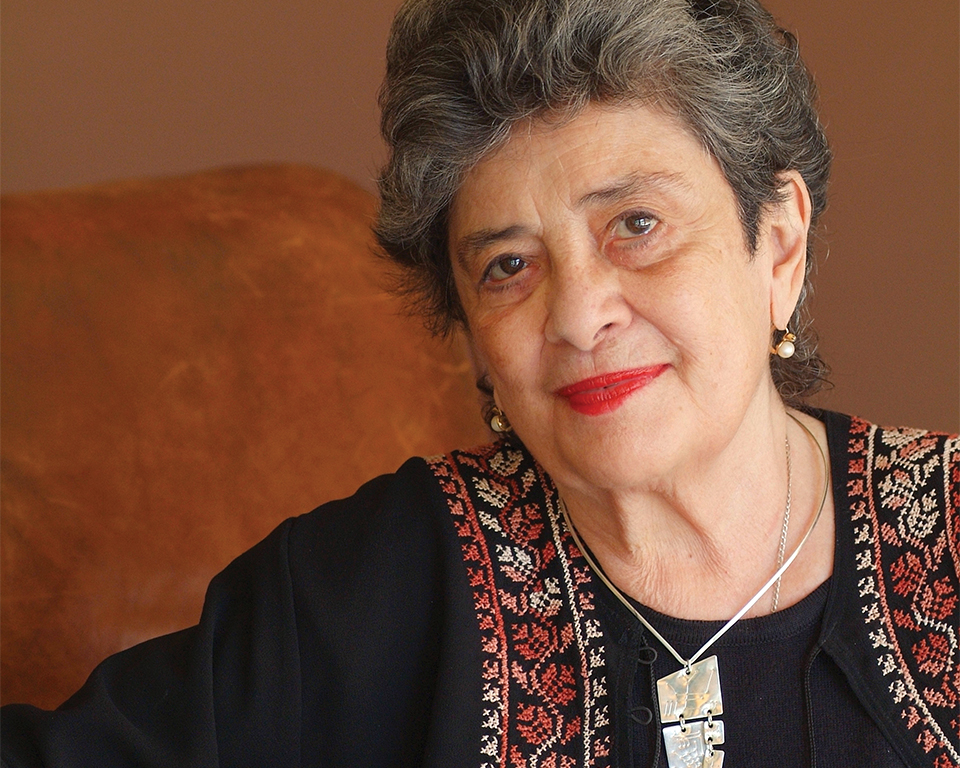 Editorial note: When George Evans and Daisy Zamora passed along word this morning that Claribel Alegría (1924–2018) had died, we immediately reflected on her legendary stature in the poetry world and fondly recalled her visit to the University of Oklahoma in 2006 to receive that year’s Neustadt International Prize for Literature. The following essay, drawn from her acceptance remarks upon receiving the prize, appeared in the May 2007 issue. On behalf of all my colleagues at WLT, we’d like to extend our deep sympathies to Claribel’s family and friends. – Daniel Simon, Editor in Chief

First and foremost, I would like to express my appreciation for this important and unexpected prize in the name of my husband, Darwin “Bud” Flakoll, who passed away some years ago. I am profoundly grateful for this award and to the Neustadt family; the prestigious magazine World Literature Today; its executive director, Robert Con Davis-Undiano; its editor in chief, David Draper Clark; to the members of the jury who bestowed upon me this prize, and—last but not least—to Nicaraguan poet Daisy Zamora, who nominated me for the award. It is a very great honor to be here, with you, to accept this prize. In all modesty, I confess that I never dreamed of receiving it, and I hope not to disillusion you.

Throughout my life, I have made incursions into many literary genres, but ever since my childhood, poetry has been and continues to be my passion. From before I knew how to read, my parents had me memorize poems by Ruben Dario, the great Nicaraguan poet who founded the modernist movement that transformed the Spanish language and whose work I recited with pleasure to whoever was naïve enough to ask me to do so. The rhythm of Dario’s poems fascinated me. Often—and even alone—I would recite his work out loud. Understanding the meaning of his verse didn’t matter, for the music of his poems was the most important thing. It was like the voice of the wind, the pounding of rain on windows, or the eternal roar of the ocean waves. As I grew older, I became more and more enamored of words. I wanted to know the meaning of each one of them and to memorize the dictionary.

From very early on, I was quite fond of reading poetry. It is a habit of mine. At night, whenever possible, I read at least one poem before going to sleep. There have been good and bad influences on me as a poet. I have written many imitations of whatever I might be reading at any given time. I learned numerous tricks, some of which are quite useful and still serve me well. The Bible has greatly influenced me: the Book of Job, the Psalms, Ecclesiastes, the Song of Solomon. And poetry, as Percy Shelley observed, is like a great river into which thousands of tributaries flow. In essence, all poets contribute to writing the great endless poem.Words are sensual. They seduce us and spark our imagination, but they also express intelligence and logic in constructing towers of ideals and culture. The Bible tells us that “In the beginning was the Word, and the Word was with God, and the Word was God.” The word is our sword, our strength, the magic force that is given to things in order to name them. Having already entered into adolescence, I wanted to express myself through words. I evoked them, was delighted by them, but at times I also came to hate them, to come to blows with them when they didn’t respond to me. As a poet, I like to invent and conjure up words, watch them fly, remain in flight, and many times fall and rise again bruised and wounded. There are words that reveal and others that conceal and still others that steal our sleep. Words are often empty, and we know not what to do with them, and they make us want to throw them to the floor and stomp on them to see what might emerge.

In the region from which I come, Central America, we love poetry, and at times we use it to denounce what is happening around us. There are many fine testimonial poems. The poet, especially where I’m from, cannot and should not remain in an ivory tower.

The poet celebrates humankind, the universe, and the creator of the universe. It is impossible for one to remain indifferent to the turbulence that our planet and its inhabitants suffer through: war, hunger, earthquakes, misery, racism, violence, xenophobia, deforestation, AIDS, and childhood affliction, among others. In the region from which I come, Central America, we love poetry, and at times we use it to denounce what is happening around us. There are many fine testimonial poems. The poet, especially where I’m from, cannot and should not remain in an ivory tower.

To be a female poet was very difficult for me as an adolescent. I began writing relatively early. At the age of fourteen, after reading Letters to a Young Poet, by Rainer Maria Rilke, I knew that this voca­tion was for me. My parents never voiced opposition to the idea, but I used to write virtually in hiding. Except for my parents, I showed my poetry only to my literature professor; to Salarrue (Salvador Salazar Arrue), a great Salvadoran short-story writer; and to Alberto Guerra, a Nicaraguan/Salvadoran poet. If my women friends had been aware that I was writing poetry, they would have made fun of me, and no young man would want to approach me, not even to dance. Among my generation in Central America, women of the leisure class had the option of marrying or controlling their husband’s purse strings or of remaining chaste and virtuous, baking cakes for their nieces and nephews.

“The world will remember Claribel Alegría as a great and important writer. At WLT, we will remember her as a dear and trusted friend.” – RC Davis-Undiano, Executive Director, World Literature Today

Just a few years ago, one could easily identify the women in all of Latin America who stood out in literature. Names like Gabriela Mistral, Alfonsina Storni, Juana de Ibarború, Delmira Agustini, Claudia Lars, not to mention the greatest of them all, Sor Juana Inés de la Cruz, who, five hundred years ago, took off her feminist gloves when she wrote, “Stupid men, who, without cause, accuse women,” words proclaimed rather shockingly. I suspect that Sor Juana opted to become a nun in order to have the opportunity to receive an education, without which she would have been veiled in silence.

In my particular case, after finishing secondary school, I had to spend two years learning to sew, cook fine cuisine, and play “Für Elise” on the piano before I could rebel. My father in no way wanted me to travel abroad to study or to attend the university in El Salvador. He said that there were hardly any women there and that I would be the object of disrespect. Finally, with the complicity of my mother, along with threats of my own, I succeeded in convincing my parents to allow me to travel to the United States to continue my studies. In spite of the fact that my father was machista, he never opposed my pursuing a career as a poet. On the contrary, I believe deep down that he was pleased that I did, for he loved poetry.

Soon before traveling to the United States, my parents invited me and my younger sister to gather in the living room. There, my father showed an upright Steinway piano to my sister, who had great musical talent, and told her, “This is your instrument. Take advantage of it.” In turn, he brought me a wooden case with a felt-lined interior that housed a Parker fountain pen: “This is your instrument. Use it as a sword,” he instructed. My father was intuitive. I’m sure he feared his own words, but he had to speak them to me, nevertheless. Quite often I have used my poetry as a sword, and I have brandished it against my internal and external demons.

Translation from the Spanish
By David Draper Clark