“Dogs bark,” writes Warren Motte, “for the same reasons that I write: it’s our way of coming to terms with things, gropingly, imprecisely, and as best we can.” 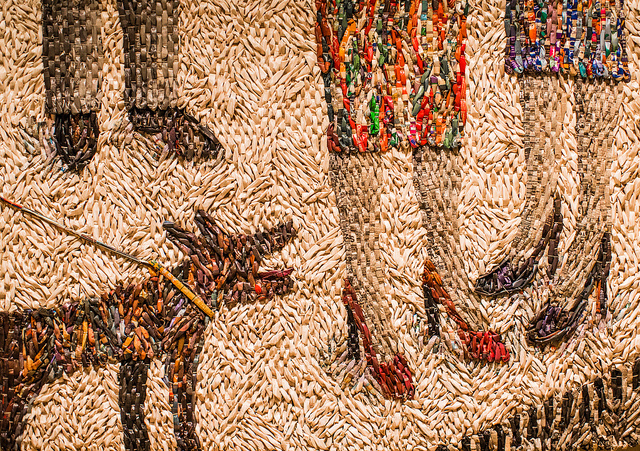 I have never thought of myself as a sentimentalist, and I don’t believe that anyone who knows me even passingly well has thought of me in that way, either. Nor have I ever imagined myself to be a good hypnotic subject; quite to the contrary, in fact. Nevertheless, barely a month ago, all of a sudden I found myself deeply hypnotized and wallowing up to my eyebrows in sentimentalism because of a purple turtleneck sweater.

Allow me to explain—although I fear that my efforts in that direction will seem thin and unconvincing to anyone who has not come under the sway of that purple turtleneck sweater.

I have always wished to live among dogs, and during most of my life, I have succeeded. I suppose that’s my best excuse for acting the way I did a month ago, or at least the most readily available and easily understandable excuse that I can muster. For the truth of the matter is that even my wife (who has put up with me for more than a third of a century now, and who has seen me at my finest moments and at my worst moments, such as they may have been) barely recognized me when the purple turtleneck sweater cast its spell upon me.

So yes, dogs. I like dogs beyond all measure. Big dogs and little dogs, mutts and purebreds, svelte and chunky, furry and sleek, it really doesn’t matter. They don’t even have to be well-behaved: there are two of them barking in the room next to me as I write this, and I find that sound soothing and musical rather than anything else. Who knows what makes them bark? A squirrel they’ve just seen outside? A deer? A cat? The knavish FedEx man? They bark, I think, for the same reasons that I write: it’s our way of coming to terms with things, gropingly, imprecisely, and as best we can. For dogs, that process is always a dynamic one, and I never tire of seeing it, watching them as they make their way through the world, sometimes boldly, sometimes tentatively, but always in a significantly mobile fashion, one that consistently beggars whatever mobility we humans can muster. Dogs are always launching themselves out into the world and retreating therefrom, back and forth, and back and forth again.

A few months ago, my wife and I came upon a little dog doing just that, in a small town on the eastern plains of Colorado that we were just happening through. It was immediately clear to both of us that the little dog was not performing that canine ritual in a playful, engaging manner, but rather because it was disoriented and terrified, running out into traffic and then back again into the parking lot where it seemed to have elected a querencia of sorts. On this crisp January day, that little dog was chilled to the bone—in spite of the purple turtleneck sweater it was wearing. That was it for me: from the moment I saw the purple turtleneck sweater, I was no longer my own man. Instead, I acted automatically, unthinkingly, obsessionally, more like a zombie than a human being. 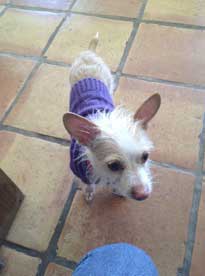 It took us almost an hour to coax the little dog into our car, but I would have spent a week doing it, or a month, so obvious, necessary, and inevitable did that task seem to me. Like good citizens, we took the little dog to the local Animal Control authorities. They assured us that they would look for its owner. But if nobody claimed the little dog after three days, they added, it would be euthanized. I have never liked that word. It’s cruel, and it grates upon the ear. I liked it still less that day, and consequently I told those people that we would be back to get that little dog if nobody else came for her. Three days later, we did just that; and we brought her home with us, still dressed in her purple turtleneck sweater (fig. 1).

That latter accessory, as appealing as it may be, cannot mask the fact that this little dog, now our little dog, is, to any objective eye, a bit funny looking. She’s a size or two too small for most people, and she looks as if several breeds had done battle over her, with no clear winner. She’s absolutely hairless on some parts of her body and impossibly, wildly furry on others. She has bulbous eyes and an elongated snout, but despite that (or by virtue of that?) the facial recognition software in my camera interprets her features as human. Go figure. In any case, yes, she looks a little strange. Indeed, my sons—need I mention that they’re a generation younger than me?—insist that she’s outright fugly. I grasp the sense of that term dimly, and I trust that you will, too. I have asked them repeatedly if it’s a portmanteau word, but they just look at me with forbearance and smile. I’ve seen that look on other occasions, and it never fails to annoy me. For my part, I don’t think that she’s quite that bad looking, but it’s undoubtedly true that no one will mistake her for Catherine Deneuve (that reference surely dates me as someone in late middle age at least, but what the hell). Though come to think of it, Catherine Deneuve would look great in a purple turtleneck sweater.

Needing something to call this little dog, we named her “Sheba.” Because if you look at her closely, you quickly discover that there’s something decidedly regal about her, a je ne sais quoi that separates her from the common run of her species.

Most reluctantly, we did away with the purple turtleneck sweater. It was too ratty and frayed (and, frankly, far too intoxicating) for daily wear. It’s in mothballs now, lovingly preserved. It has been replaced, advantageously, by a silver vampire cape and a jaunty red Tyrolean affair. The former is a heavy weather garment, suited for any conditions up to and including Rocky Mountain blizzards. The latter is a stylish little number; in color and in cut, it resembles the dress uniform of the Royal Canadian Mounted Police. (Does anyone but me remember Sgt. Preston of the Yukon and his faithful dog, King?) So that’s the last of the purple turtleneck sweater. That’s the last I’ll say about it, too—though with only a bare minimum of encouragement I could say a good deal more about it, as you will easily understand. Let us bid it adieu, together.

Spending much of her time unclothed this past winter (our Colorado February was unusually—and disturbingly—mild), Sheba began to grow a winter coat of her own. Notably, she grew a lot of hair on her back (and in that, I confess, she’s not alone in our family); but also her sides and her muzzle are a great deal furrier than when she first came to us. If she keeps it up, she’s going to look like a real yeti. 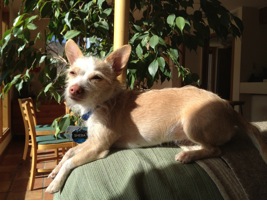 We have discovered a great deal about her since her arrival, particularly about her likes and dislikes. She enjoys perching in very high places, such as the back of a couch. From there, she can watch over the lowlands of our living room floor, and swoop down upon anything—a tennis ball, a wind-up mouse, a chew toy on a string—that dares traverse them. Most of all, Sheba likes to bask in the sun. The latter is exceptionally bright at these lofty altitudes, and when she squints her eyes against the glare, she looks pleasingly like an iguana (fig. 2).

Yet where Sheba has really come into her own, where she has really blossomed, is in her relations with our other canine housemate, “Oscar.” A true mahatma thinly disguised as a Welsh corgi, Oscar has welcomed Sheba with a degree of benevolence I have never witnessed, either in his species or in mine. Oscar is three years old now, and he has been with us since he left his litter. We thought that we knew him through and through—we raised him, for heaven’s sake!—and we imagined that there was not one of his many admirable qualities that had escaped our notice. Yet since Sheba has come to live with us, Oscar has displayed truly astonishing depths of patience, affability, gentleness, and warmth. Watching the two of them play on the rug, one goes from oohs to aahs despite oneself. It’s like living in the middle of a Hallmark card. 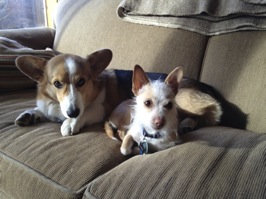 Sitting next to Oscar, and under his broad wing as it were, Sheba looks distinctly less waifish and lost. Less like the ragamuffin she seemed when we first came upon her and more like a little dog who has made a trusty friend, without compromising her own principles. As if from here on in she had a place of her own in a minimal but nonetheless sufficient pack of two brave hounds. In short, sitting next to our Oscar, our Sheba looks just fine (fig. 3).

I don’t have a great deal to add, for the time being. I shall certainly have more to say about Sheba a year from now, or ten years from now, when we have had time to entwine ourselves in each other’s lives a bit more deeply. Allow me to note just a couple of things, here at the end, two things about Sheba that seem to me absolutely clear and indisputable. First, something that we discovered about her almost immediately, and which every day since has abundantly confirmed: she’s a good little soul, indeed a good person (and here I’m confident that dog people will understand precisely what I mean, leaving people less devoted to dogs to shake their heads with pity and disdain). Second, even though she herself may not be, properly speaking, and to an eye less biased than my own, beautiful, Sheba nevertheless walks in beauty, reflecting the beauty around her in quite breathtaking ways, striding out toward the horizon with head held high, her gaze more dauntless with every passing day.

Editorial note: To read more about Oscar—and living with dogs, consuming fictions, and walking in beauty—see Motte’s “On Interspecies Love and Canine Tauromachy: A Prolegomenon,” Contemporary French and Francophone Studies 16, no. 4 (September 2012), 571–84.

Warren Motte is Professor of French and Comparative Literature at the University of Colorado. He specializes in contemporary writing, with particular focus upon experimentalist literature. His most recent books include Fables of the Novel: French Fiction since 1990 (2003), Fiction Now: The French Novel in the Twenty-First Century (2008), and Mirror Gazing (forthcoming).

Warren Motte is College Professor of Distinction at the University of Colorado. He specializes in contemporary French literature, with particular focus upon experimentalist works that put accepted notions of literary form into question. His most recent books include Fables of the Novel: French Fiction since 1990 (2003), Fiction Now: The French Novel in the Twenty-First Century (2008), and Mirror Gazing (2014).