For all the aunties, but especially for Mary Maxine Lani Kahaulelio

Aunty says I love you
And I stand in her shadow, expanding
And every fear in me evaporates
Every doubt casts itself aside
Every whisper that does me no service is carried away
And I become
Everything she dreamed I could be 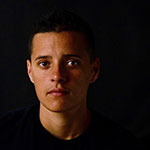 Jamaica Heolimeleikalani Osorio is a Kanaka Maoli wahine poet/activist/scholar born and raised in Pālolo Valley to parents Jonathan and Mary Osorio. Heoli earned her PhD in English (Hawaiian literature) with the completion of her dissertation entitled “(Re)membering ʻUpena of Intimacies: A Kanaka Maoli Moʻolelo beyond Queer Theory.” Currently, Heoli is an assistant professor of Indigenous and Native Hawaiian politics at the University of Hawaiʻi at Mānoa. Heoli is a three-time national poetry champion, poetry mentor, and a published author. She is a proud past Kaiāpuni student, Ford Fellow, and a graduate of Kamehameha, Stanford (BA), and New York University (MA).