Calls to Demand the Return (for a Fair Price, in Good Faith) or, With Typhoon Wind: We, Prisoners of Conscience, Protest Bars and Bullets, Swallowed Fledglings, the Gone Hurricane of Pelicans (from alcatraces), and Further Desecrations

1 Image of layered spectrogram images are imposed over the image of an admission ticket to Alcatraz Island and Ai Wei Wei’s Alcatraz installation, @Large, on December 1, 2014. The first spectrogram image is sourced from an audio recording of ambient sound captured while walking the length of Ai Wei Wei’s suspended dragon kite sculpture “With Wind” and represents a patron saying the words “here on Alcatraz.” The second spectrogram image is sourced from an audio recording of a California scrub jay (Aphelocoma californica) reacting to the recent death (the cause of which was a feral cat attack) of its fledgling offspring on July 7, 2019. All recordings and images are by the author.

2 Text overlays consist of excerpts from: “Alcatraz Proclamation” or “Proclamation to the Great White Father and All His People,” issued by members of IAT (Indians of All Tribes) in 1969, during the occupation of Alcatraz Island; Prutehi Litekyan: Save Ritidian and Oppose Degradation and Militarization of Native Lands, a petition issued by CHamoru activist group Prutehi Litekyan in 2017, opposing the live-fire range installation by the US government on the island of Guåhan (Guam, an Unincorporated Territory of the United States whose citizens have no congressional voting rights in the general presidential election, although one-third of the island’s landmass is controlled by the US military); Ai Wei Wei’s recorded interviews about @Large; and original text by the author. 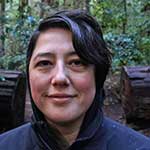 Lehua M. Taitano is a queer Chamoru writer and interdisciplinary artist from Yigu, Guåhan (Guam), and co-founder of the art collective Art 25: Art in the Twenty-fifth Century. Her books include Inside Me an Island, A Bell Made of Stones, and the chapbooks appalachiapacific, Sonoma, and Capacity. Taitano’s work investigates modern indigeneity, decolonization, and cultural identity in the context of diaspora.