At the end of this sentence, rain will begin.
— D.W., “Archipelagos,” Map of the New World

Part of the bannister-railing is absent
in spite of its strong metal-rivet moorings.

Termite-eaten, consumed by the sea,
I can see its woody skeleton float faraway

among the surf, its salt-scarred coat
tossing and struggling to keep afloat

against the waves’ incessant lashing.
There is music in its disappearance —

a new story — history restored
by resilient fingers of a master artist.

his mind sparking with electric edge,
whiplash wit at its most acerbic.

There is generosity for family, friends —
those who are gone, and remain —

and thirty new poems,
an intricate magic of ekphrastic love.

In the front garden facing the same sea
with Pigeon Island on the horizon’s left,

or a ballerina’s curved arch —
a stone-memorial for a close friend.

in gratitude the sea sings
a raucous song,

absorbing his commandment:
At the end of this sentence, rain will begin.

Editorial note: From Anthropocene: Climate Change, Contagion, Consolation, forthcoming in the US and UK on December 2. 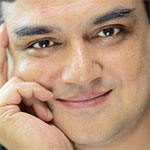