On Home and Migration: Two Poems

after Argentina’s World Cup Victory in 1978

La Patria comes dressed in multiple costumes,
during the “Dirty War” it wore the colors of the flag,
came in the shape of a man carrying the nation’s
emblem over his heart, trotting gloriously into the

What La Patria could not cover with confetti
were the bodies de Los Desaparecidos.
while the nation celebrated one victory
after another, the disappeared dropped
in death flights, their bodies free-falling from
helicopters into Río de la Plata.

30,000 men and women erased
by the military fist terrorizing in silence,
while people in the streets chanted
Ar-gen-tina!, Ar-gen-tina! Ar-gen-tina!

Dear mother and stepfather, abuela, hermanas y hermanos. Dear perros callejeros, dientes de león, cracks en la vereda and birdsongs. I write to you with the burning stomach of time, digesting a history of river-bodies the state took. I write to you with the borrowed language of diasporic poets, the many who sing through the path away from home. I quote the immigrant song marked by the rhythm of footsteps and sweat coming down an open wound. The cries are for the motherland you were forced to abandon, a broken language knotting your throat and nothing but the right to live—weighing on your back like the few belongings you brought along. This song is about foreign imperialistic meddling, a made-up culture shoved at every entryway of your resilient body—filtering the American dream through a tired liver. I praise your decision to stay in one place, to leave and find the means to return with a savings in change you kept in a purple vase. I write today with the knowledge that I’m no longer the daughter you walked to school each morning, the one whose hair you wetted and combed in a ponytail to keep the piojos out. I write with the knowledge that there is still a part of her in me, a part of you in each time I bleach the toilet. Dear people of my town, el barrio América, los del mismo lado de la ruta, tell me how do I return to you? How do I make myself known in a language you do not know.

I, Brenda, walk through hard pavement wishing for the moonlit dirt road. How I miss a place I have become stranger to. In this your holy day, I sometimes pray. Take me to rest by the river bend, Ma, en el Paraná de tu pupila—take me to rest. Llego mañana a tus verdes campos, I will leave you again by dawn. 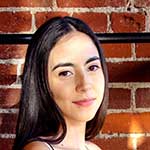 Brenda Delfino is a poet and a writer born in Argentina and based in Riverside, California. She is pursuing an MFA in creative writing and writing for the performing arts from the University of California, Riverside. Her works have appeared in Los Angeles Review of Books, Spectrum magazine, and Insight magazine.