Where is it I end?
Is it just past the last
echo of my fingertips or
tongue? Is it where
the ink dries on this page—
is that my finality?
Between here and there,
is the expanse of living,
it’s where the rainstorm
releases itself to soak
all that is parched. But
our throats dear friend
cannot catch what
matters.

Author’s note: On May 4, 1959, Russian author Boris Pasternak (1890–1960) responded to a personal letter written by an undergraduate student from the University of Oklahoma (OU), Ron Jones, who wrote to Pasternak out of a desire to learn about meanings and symbols in the novel Doctor Zhivago. Jones did so in a fit of desperation because he had been stood up at a dance by another student who was enamored with the novel, and he reacted by locking himself into a women’s restroom (in his fraternity, and taping an “out of order” sign to the door) with his manual, portable, nonelectric, 1950s typewriter. Several weeks later, Jones received a most unexpected and eloquent surprise from Moscow, Soviet Union, which was signed “B. Pasternak” (read the letter here). The eventual Nobel laureate died May 30, 1960. Pasternak’s son, Yevgeny, accepted the Nobel Prize on his father’s behalf in 1989. Jones donated the Pasternak letter to the Western History Collections at OU on August 9, 2021. 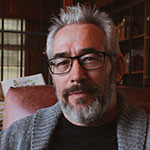 Todd Fuller is curator of the Western History Collections at the University of Oklahoma Libraries. Some of his other work has appeared in Crazyhorse, Poet Lore, Puerto del Sol, Quarterly West, and Third Coast. He is co-editor of the forthcoming anthology Level Land: Poems for and about the I35 Corridor (Lamar University Literary Press). His first two books were 60 Feet Six Inches and Other Distances from Home: The Baseball Life of Mose YellowHorse (Holy Cow! Press) and To the Disappearance (Mongrel Empire Press). He lives with his wife, two kids, and a dog named Jake in Norman, Oklahoma.