Let us sit in the open air where days
I work, my hands shaping a small plane
out of sticks. I tell you only
what I lived. See, this is a wood
that does not sink. What drifts ashore I carry
like light itself. Like bones

of air. Then, I was in full youth. Many decades
we’d been like the tiniest bird in the Navy’s
tightening fist. We, their ground
zero. Their planes loosed their bombs
upon us, every ship in their Atlantic Fleet
training on us the ship-to-shore gunning
they knew never again would be the way

of war. Worst was the season of Operation
Springboard, when friendly countries
joined in—each year we were told
to leave our homes. We crossed the island
by foot. Some carried children too small
to walk; an older boy clutched
a goat’s lead. We could take only
what we could hold in our arms or tether

to our wrists. Each return found our houses
a rubble of sticks. Our animals dead
where we’d fenced them. Or rather,
the scattered bloody scraps we believed
them to be. In the good hours between,
I often watched the birds. I wanted to know:
how do they go so well with the wind? I had it

in my blood to fly. I was eight when I answered
the teacher: I will be a pilot. At school
we’d sit always on the edge
of our seats, the strings in our thighs tight
and burning, our bones buzzing like the tubes of light
trained above us. Ready to fly
at the next explosion which was
always coming. We could not concentrate.
We could learn nothing but our own country’s great

indifference. From the hillside classroom’s window
we could see the plane shell the harbor’s
shining face, but not our fathers
casting nets, not if the fish again floated up
by the thousands. These—collateral
damage, as were we—we refused to eat

no matter our hunger. Each season our nets
lightened, our pots shattered or lifting
a single scuttling creature, or the full weight
of sorrow—streaming saltwater, only.
Once I witnessed a bomb falling
into the harbor. The sea snaked up
in a curtain of steam, like a hose
twisting. But the bomb was quiet. The depths
are so much silt, but I swear it is there. I listen for it now

in my dreams. I was seventeen when they schemed
to remove us from our island like ticks
from the bloodied back of a cow, when they piled
their stray bombs onto thousand-year
coral heads to shatter the living bones
of our fishing grounds, when the fish again
boiled up and we held their cadavers high
in our fists, we shook them at the mainland
reporters to show this is what it is
to live like the dead among the dead

in our own country. Yours, too, we are all
Americans here. The night you ask of
at the fence, their barbed wire caging us back
from our Peace Chapel the Marines were
breaking apart, from Flamenco
where our children swam, where the Navy
dropped their bombs with or without flying
a warning, I cut at it with my machete, I was forced
to run back and forth to the sea, a small cloth
at my nose and mouth I kept wetting—the gas
they flung at us was nearly unbearable, yet

we bore it. With our bare bleeding hands we tore
the wire free, and we were through. That was the night
I finally flew: in their helicopter, my hands bound
behind me. One of fourteen. They pushed my head
down to force me inside, the noise those blades cut
from the air so immense I again was lifting
a lobster pot just as a plane dropped its load so near

it exploded inside my head. At court, we stood together.
We heard no charges. Through the high windows,
we heard the people shouting in the street, Fuera
los Yankees! The judge read out our sentence.
After, I said, Your Honor, viva Puerto Rico libre.
In your English which we refused
to speak: Long live a free Puerto Rico.

But there is no such thing. When I was a boy,
when I came to accept I would have no chance
to become a pilot, I stole my father’s razor and began
to shape my planes. I cut myself again
and again, but I remembered the way
of the blade. I learned. Explain to me
then, how our story could have been told—
in the papers, in the courts, in an English book I have
myself seen—and still no one you know

knows us? But even our own youth
text through their days oblivious to the resistance
they’ve succeeded from, rolling their eyes
at their own grandfathers as each New
Year’s display of fireworks flashes them back
to that terror. As if our story were just
the blown ashes of hurricane grass, our rare birds
who nested there, sooty terns who can remain aloft

for years, sleeping in air. Fallout from one
of their bombs, its unchecked fire. As if our lucha
were as wasted as our Agent Orange–soaked bay,
our key scarred to a giant X seen only from sky
where once had been scrub forest—cat’s claw,
pipe-organ cactus, black willow, cassia trees.

History weighs upon us, who remember.
But here, see this plane I am working.
In my hands, one month, two, it will finish.
Some I carve of mahogany, to sit solely
as art. Some, like this, I make of driftwood, to ride

the air. You who have heard
this story, to understand, hold it
in your own hands; by its weight
we will know it flies. 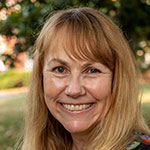 The recipient of a National Endowment for the Arts Fellowship, the Poetry Society of America’s Lucille Medwick Memorial Award, and three Georgia Author of the Year awards, Sandra Meek has published six books of poems, including Still (Persea, 2020), An Ecology of Elsewhere, Road Scatter, and the Dorset Prize–winning Biogeography.