I wish that I could find myself asleep tonight
in a house on the banks of the Manzanares,
the river that begins in the Sierra de Guadarrama

and flows through Madrid before joining
the Jarama, the Tagus, and then emptying
four hundred miles away into the Atlantic,

the house christened Quinta del Sordo,
the Villa of the Deaf Man, so named for the owner
who, in silence, walked its grounds

during the Spanish uprising of 1808
and the Peninsula War, selling the home
to the artist Goya in 1819, who, deaf himself,

began to paint directly on the plaster walls,
only his maid and lover, Leocadia Weiss,
accompanying him, her dark hair veiled

in Goya’s painting, one of the last
of the sequence throughout the home,
the elder Goya rumored to be mad

at seventy-two, resigning to the country
from the court in Madrid, the river cutting
the countryside like a slash from a French bayonet,

and Goya’s hand rising to the plaster walls,
his brush tip wet with oils as Leocadia
poses in a funereal dress, Goya placing her

in the painting beside what is believed to be
a burial mound, and though I do not know
what I would dream there in that home,

I would like for Goya’s dog to guide me,
the dog of whom only his black muzzle
and head are seen rising above the ochre earth

that divides his painting horizontally in two,
the context unknown as to whether the dog
is sinking into the earth or raising his head

cautiously from his den, and I imagine him
nudging me, asleep in the lone bed centered
in the upstairs room, the dog, not tripping

over his paws or shaking his coat, but placing
his chin on my thigh with the same pressure
with which someone might wake a child,

or lower the barrel of an adversary’s gun,
and without a whimper the dog would lead me
past each painting, past Saturn Devouring His Son,

past The Fates, Two Women and a Man,
past Duel with Cudgels, the background
of all of the paintings a kind of mottled gray,

less dark than the dog’s sleek fur, wet from a swim
perhaps, his coat dark as the night sky, made darker
by the piercing of stars, their pin-prick light falling

on the Manzanares, on the banks of which
the dog and I stand, his pearlescent eyes round
as the moon glinting on the river’s wet sand. 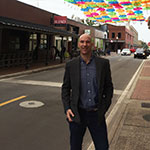 Jonathan Fink (jonathanfink.com) is professor and director of Creative Writing at the University of West Florida. He has published two books of poetry: The Crossing (Dzanc, 2015) and Barbarossa: The German Invasion of the Soviet Union and the Siege of Leningrad (Dzanc, 2016). His poems and essays have appeared in the New York Times Magazine, Poetry, New England Review, TriQuarterly, Southern Review, Virginia Quarterly Review, Slate, and Witness, among other journals.